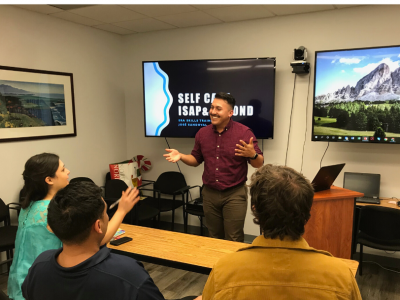 Sandoval is pictured leading a workshop on good research practices.

When José Sandoval first came to Duke University from Southeast Los Angeles, it was important to him to meet other first-generation American college students and to find mentors on campus with whom he could relate to and seek advice from.

When he took his first global health class during sophomore year and declared a dual major in global health and evolutionary anthropology, Sandoval began connecting with and forming strong relationships with peers and professors at DGHI.

A 2017 Duke graduate, Sandoval now works as a research associate with UCLA Integrated Substance Abuse Programs, in Los Angeles. DGHI intern, Brianna Rochelle, recently spoke with him about his career and some of the relationships and experiences he had at Duke that helped shape where he is today.

What drew you to global health? Did a particular course or faculty member spark your interest?

I've always known that I wanted to incorporate public health and medicine into my career. What really solidified my interest in global health was when I took Global Health 101 with Dr. David Boyd during my junior year. Taking an introductory course with someone so charismatic, so caring, who does really important work in Guatemala—it really communicated that people can do really awesome things, and that the possibilities are endless within this field.

How would you describe your global health passions?

I want to be able to expand healthcare services to communities at large while also doing it on a one-on-one patient basis. A big takeaway from my time at DGHI was that global health doesn't have to be global. Right now I'm doing a lot of domestic work, and that's what I wanted to focus on. There are so many problems right in my backyard that I saw growing up, and I really want to make sure I address those before I go somewhere else. My focus is helping the communities I grew up in be as healthy and successful as they can.

Has there been a study or project you were involved with, either during your time at DGHI or afterward, that has been particularly compelling or impactful for you?

I became very interested in a DukeEngage project that I was in the founding cohort of in the summer of 2015: DukeEngage in San Francisco. We worked with Larkin Street Youth Services, the largest nonprofit working towards alleviating and helping homeless youth in San Francisco. The goal for that was to understand youth homelessness, especially the LGBTQ+ youth homelessness crisis that's happening in San Francisco. When you look at homelessness, the label doesn't apply to one person or one type of person. I worked with clients from all different backgrounds. These clients had to face a lot of trauma, rejection and violence, and to deal with all of this happening in their lives, a lot of them were abusing drugs such as opioids and marijuana. They were very dependent on these types of substances to deal with their situation.

It was hard to see. My first day with the organization, I got asked for money by like twenty people just in the span of an hour. It was difficult walking through the door and seeing so many people that looked like me and didn't have homes. The question is, how do we get them housing or healthcare that they don't have access to; how do we get them educated and engaged in programs? There was some after-school tutoring, GED tutoring which I took part in, and if you were able to get these clients engaged in any kind of way, they would come back.

What would you say was your most memorable experience at Duke? What did you like most about your time here?

I would say it was being able to work so closely with other students as well as faculty. It's a whole teamwork mindset that I wasn't expecting and didn't see in my other classes outside of global health. With global health, there was always conversation, meeting up and diving deep into the data we collected or the literature we needed to review. The office hours were awesome, too—just being able to talk to the professors about anything and feeling comfortable doing so.

I also think it's cool how easy it is to take a global health class because it’s such an interdisciplinary field. Some of the most interesting classes I took were cross-listed with cultural anthropology and history. I feel like that's how you hook a lot of people, being able to integrate fields of study.

Tell us more about your current work.

I'd be remiss if I didn't mention how DGHI steered me in the direction of the job I have right now. During my senior capstone with Dr. Boyd, I partnered with some classmates that I had known and collaborated with on other academic projects, and one of them was actually affiliated with the Vance County Public Health Department in North Carolina, a couple miles outside of Chapel Hill. She was doing epidemiology work, especially related to the opioid crisis and how it was impacting the black population in that area. A lot of the people who were struggling with opioids in that area of North Carolina were HIV-positive and from low-income backgrounds, and the overdose rates were really high. She mentioned it as a possible capstone project and all my classmates agreed this was an important topic. And it was one that I could relate to because I've had family members get lost in opioid addiction.

So we worked all semester long with the public health department, drafting brochures and helping communicate ways in which people could access healthcare as it related to opioid abuse, as well as how they could help get their addiction managed and how to avoid overdoses. We educated them on the drug Narcan, which helps reverse overdoses. We were trying to disseminate that information to the community as much as possible because when it comes to low-income, impoverished communities, understanding of what healthcare is can be very low. I'm not sure where it stands now, but when we wrapped up the capstone project, the county health department was planning to use the brochures we drafted.

With that experience on my resumé, I began applying for jobs, and there came a phone call from UCLA. I'm working there now with the UCLA Integrated Substance Abuse Programs. They do a lot of work involving substance abuse and also methamphetamine and alcohol abuse, gambling, anything along the lines of addiction. They're doing both research studies and program evaluation. I work in program evaluation, and for the last two years, I've been helping evaluate a statewide public health program California is implementing to address the opioid crisis. We’ve been collecting patient numbers and interviewing patients who are going through addiction treatments to see how this public health intervention is working, if it is working, and how to improve the services.

We're working closely with the California Department of Healthcare Services, which is in charge of the statewide implementation of this program. We relay all the quantitative and qualitative data we collect back to the healthcare department so they can improve healthcare services and make them more accessible to people of all demographics. It’s not just a predominately white problem. It's impacting Latinx communities, it’s impacting immigrant communities, it's affecting black communities. It's important that these populations also get access to this care, whether it's through their primary care doctor or if they go to a more formal treatment program.

So it was a very serendipitous phone call for me to be able to go back and start doing the work that I had started doing in my senior capstone project, and it was cool that I could come back to California, especially L.A., to help expand these services and healthcare, as well as educate people and communities that look like the ones I grew up in. That's what's important to me. I grew up seeing a lot of health disparities that were very preventable had there been public health interventions that were a little bit more culturally competent and that catered to communities that were predominantly Spanish-speaking immigrant communities.

So your work takes place primarily in California?

Yes. The project was based off of a similar project that was designed and implemented in Vermont, and the goal was pretty much to take that project and scale it up so it can be a better fit for California. It's crazy—I went and visited a site back in April, one of our clinics in Eureka, California. We had to take this small plane to this little airport, and by the time we were driving down, it felt like I was back in North Carolina. People think of California and they think of Los Angeles, San Francisco, San Diego; but there are parts that look very much like North Carolina.

You’ve mentioned medical school. What are your plans for the future?

The goal is to get an MD and an MPH degree, to focus on health behavior with my MPH program and try to acquire that knowledge and skill set and then apply it to my MD. I want to go into a primary care setting somewhere around Southeast Los Angeles, to establish a hub of medical services and behavioral health services that can educate and equip various disenfranchised communities with the best knowledge of healthcare and how to navigate it. 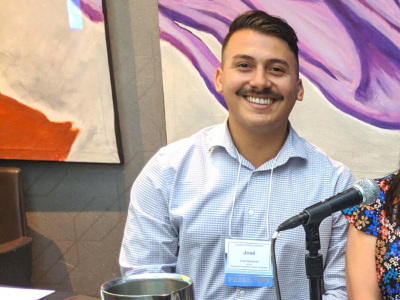 A big takeaway from my time at DGHI was that global health doesn't have to be global... there are so many problems right in my backyard that I saw growing up, and I really want to make sure I address those before I go somewhere else.