Researchers conducting studies in another culture run the risk of their surveys getting lost in translation, leading to unreliable research results. But with some careful collaboration, common pitfalls can be avoided, says Duke Global Health Institute affiliate João Ricardo Vissoci.

Vissoci has worked with Catherine Staton, assistant professor of emergency medicine, neurosurgery and global health, and partners in Tanzania and Uganda to culturally adapt scales assessing conditions such as cognitive functioning, psychological distress, depression and alcohol-related consequences. In a recent study, Vissoci’s and Staton’s Tanzanian team developed and tested a Swahili version of the Kessler Psychological Distress Scale for use with traumatic brain injury patients in Tanzania.

“Our team typically uses the most commonly accepted approach, called a ‘back-translation’ method,” says Vissoci, an assistant professor of surgery. “We follow the American Psychology Association guidelines with some adjustments to tailor the approach to the specific project.”

Then, the research team—along with a committee of five physicians, nurses and researchers—discussed questions and semantic issues raised by the research nurses and made adjustments accordingly. After finalizing the content, the team conducted a pilot study with 20 Tanzanian adults to assess the quality of questions and coherence of language and content. After a few weeks’ work, the team was ready to use the scale with their study participants.

Failing to conduct this rigorous translation and cultural adaptation process can jeopardize your entire project, warns Vissoci. “If you don’t have a psychometrically valid instrument, your results will be thrown into question,” he said. “If you find effects, you won’t be able to determine whether they’re a result of the intervention or instability of the scale. Or worse, if you don’t find any effects, you won’t know whether it’s because there are no real effects, or because the scale isn’t responsive enough.”

To Vissoci, one of the most interesting and challenging aspects of this process is the realization that some terms and concepts simply don’t translate across languages and cultures. In one of his recent studies, for example, the term “alcoholism” was a sticking point.

“‘Alcoholism’ is not a word in Swahili,” Vissoci said. “Even if you translate it to a term that grammatically makes sense, it still doesn’t have true meaning in the local context. We had to go through this entire process to settle on a term with a comparable meaning.”

In another study in Tanzania, in which Vissoci’s and Staton’s team are trying to adapt a scale to evaluate alcohol-related stigma, the team found that the scale was not performing as expected. When they took a step back to examine local perceptions of stigma, they discovered that alcohol consumption is usually stigmatized only when a negative consequence—like a death caused by an inebriated driver—results from the alcohol use.

“It’s been challenging to investigate how stigma influences people and how they receive care for their alcohol use in this setting, because the notion of stigma toward alcohol use is completely different in Tanzania compared to other places,” said Vissoci. Nevertheless, this new understanding is helping guide the translation.

Vissoci remembers another problematic cultural adaptation example from his youth: the House-Tree-Person test in which subjects are asked to draw a house, a tree and a person, and judgments are made about the subject’s personality based on their drawings. Test interpretation guidelines suggested that the presence of a chimney in the house drawing connotes an important connection to the outside world. However, Vissoci, who is Brazilian, notes that homes in Brazil—a country with a warm climate—don’t have chimneys, so no one who took the test in Brazil drew a chimney.

“There was a huge cultural barrier there, and it took years for Brazilian researchers to translate and culturally adapt the questionnaire to the local setting,” Vissoci recalls.

These examples demonstrate that effectively translating an instrument must take into account not only language, but also culture. And this means that an instrument that’s been validated in a particular setting may not be effective in another setting where people speak the same language but differ culturally.

Vissoci notes that local collaborators are absolutely vital to any scale adaptation process. “If we’re developing a scale to evaluate a concept in Tanzania, Tanzanians can provide tremendous insight into how that concept plays out in their culture,” he said. “And they can provide critical input into the development of the scale as well as how the instrument can be used most effectively.”

The impact of validating evidence-based scales in different languages and cultures is far-reaching, particularly in low-resource settings such as Tanzania and Uganda, where much of Vissoci’s work takes place and where access to culturally validated instruments is limited. In his most recent project, for example, the successful validation of the Kessler Scale will enable the team to evaluate mental health in traumatic brain injury patients, which will inform the development a post-hospitalization transition of care model that will better support patients as they recover from their injury.

Vissoci’s and Staton’s collaboration in Tanzania includes researchers affiliated with the Kilimanjaro Christian Medical Centre in Moshi. In Uganda, they work with Michael Haglund, distinguished professor of neurosurgery, neurobiology and global health at Duke; faculty from the Duke Global Neurosurgery and Neuroscience team; and researchers affiliated with Mbarara Regional Referral Hospital and Mulago  National Referral Hospital in Kampala. 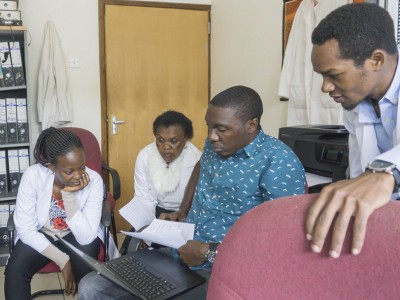 Members of the Kilimanjaro Christian Medical Centre/Duke Emergency Medicine research team at KCMC in Moshi, Tanzania, during a translation meeting ensuring appropriate translation of our tools and scales. Photo by Duan Zhao.

Failing to conduct this rigorous translation and cultural adaptation process can jeopardize your entire project.

"We must ask uncomfortable questions": Notes from Decolonizing Global Health 2020

Global Health is Local Too