Initially published by the Nicholas School of the Environment.

A member of the Duke faculty since 2011, Pan works in countries throughout Latin America and Africa on a broad range of health issues influenced by human interactions with the environment.

He currently is leading efforts to develop an integrated environmental monitoring and early warning system for malaria outbreaks that can be used by health officials in the tropics to prevent the transmission of the deadly disease.

His other recent research focuses include studies on mercury toxicity linked to artisanal gold mining in Peru; enteric infection and child growth; reproductive health and land-use change; and vulnerability and resilience to environmental change.

Pan holds joint appointments at the Nicholas School and the Duke Global Health Institute, and he is a faculty research scholar with the Duke Population Research Institute.

“Bill’s long list of important work places him in the vanguard of the field of population studies,” said Toddi Steelman, Stanback Dean of the Nicholas School. “This professorship, made possible by the Reids’ far-sighted gift, is a well-deserved recognition of his scholarship.”

Pan earned his doctoral degree from the University of North Carolina at Chapel Hill (UNC-CH) in 2003. His primary training is in biostatistics, spatial analysis and demography, with additional training in infectious diseases, environmental epidemiology, remote sensing and Bayesian spatial statistics. In addition to his faculty posts, he serves on the executive steering committee for the N.C. One Health Collaborative and on the scientific steering committee for the Population Environment Research Network, and is review editor for EcoHealth and Annals of Global Health.

The new Reid Associate Professorship was endowed through a $1.5 million gift to Duke from the Elizabeth and Whitelaw Reid Charitable Remainder Unitrust.

Mrs. Reid earned a Bachelor of Arts in sociology from Duke in 1953 before pursuing a career in professional and academic counseling. She passed away on June 1. An ardent fan of all things Duke – especially Blue Devil basketball and lacrosse – she served on the university’s Board of Trustees from 1981 to 1993 and on the Nicholas School’s Board of Visitors from 1994 to 2004.

Mr. Reid was the former editor of the New York Herald Tribune. He passed away in 2009.

The couple shared a passion for protecting the environment and were also active advocates for animal rescue. 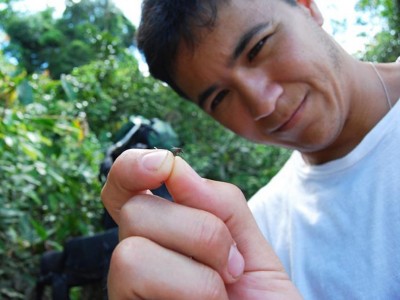 One project in the Pan Lab focuses on the development of an integrated environmental monitoring and early warning system for malaria outbreaks.

Bill’s long list of important work places him in the vanguard of the field of population studies.