Just over three years ago, when Deepti Agnihotri came to Duke’s Blue Devil Days for admitted high-school seniors, one of the first people she met was Vincenzo Malo, a student from Massachusetts. They lived in the same dorm during their freshman year, and “we’ve been close ever since,” says Agnihotri.

Now, Agnihotri and Malo are starting a new Duke adventure together. They are the first students in DGHI’s Accelerated Master of Science in Global Health program, which allows undergraduates majoring or minoring in global health to work toward an MS degree while finishing their undergraduate studies. Students in the program can complete their undergraduate and MS degrees in a total of five years, a year less than the traditional timeframe.

“DGHI is excited about the program because we can stay connected with some of our strongest majors and minors, and see their research and skills grow from the undergraduate to the graduate level,” says Laura Bey, assistant director for curricular and student affairs.

Both Agnihotri,  a global health and public policy major, and Malo, who is majoring in neuroscience and global health, began studying global health during their first year at Duke. At a friend’s recommendation, Malo took “AIDS and Other Emerging Diseases,” a course taught by global health professor Sherryl Broverman, during the spring semester. The class spearheaded his interest in the field.

“I liked how we were able to tie together the biology, the policy, the politics; all that was able to be discussed in one setting to examine the issue of HIV from all angles,” he explains.

Agnihotri took Global Health 101 with professor David Toole during her first year and was also intrigued by global health’s holistic approach to complex issues. She remembers one specific day when the class examined a sexual health issue among females in a community. “We kept going back, trying to figure out what the solution could be. It ended up being something so simple, and not something I would have thought of before. It was just mind-blowing,” she says.

Since then, both students have gone on to explore their global health passions through classes and fieldwork. Malo did fieldwork in Camasca, Honduras, where he developed a pilot study in tandem with Project HEAL, a student organization at Duke. Agnihotri joined a project in New Delhi, India, where she worked on a longitudinal study to understand the mental health of orphans and vulnerable children in an institutional care system.

The chance to continue research as part of an accelerated master’s program appealed to both. “Especially having studied global health for my undergraduate degree, I feel like I have a strong background in specific aspects of global health; but in the master’s program, I plan to explore areas I haven't looked at before,” says Malo.

“I talked to alumni who took a few years off to work and then went back to grad school, since moving up in their field required at least a master's. So I thought this program was a great way to save time earning a master’s and also learn a lot,” Agnihotri says.

Agnihotri and Malo will take one core master’s course and one elective each semester this year, in addition to finishing their undergraduate degrees. They will conduct fieldwork over the summer and work on master’s courses full time next year, receiving their MS degrees in May 2021.

“We're sort of wrapping up our whole undergrad experience, putting one part of our lives behind us, while at the same time, we're also starting something new with the rest of the master’s cohort,” says Malo. “It's been a very smooth transition. I expected it to be very rocky and difficult to navigate, but the classes so far have been really great.”

“It's so interesting to be a senior and a first-year at the same time, but the cohort has been really sweet and accepting of us,” Agnihotri agrees. “I'm really excited to meet new people and keep learning the ins and outs of DGHI.” 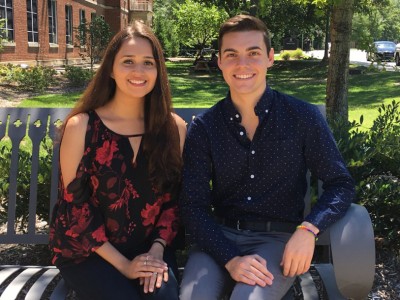 DGHI is excited about the program because we can stay connected with some of our strongest majors and minors, and see their research and skills grow from the undergraduate to the graduate level.