This is the first time the course has been offered through the Duke Nicholas School of the Environment and Venice International University.

Fifteen graduate and undergraduate students from around the world learned about the long-term social, economic, human health and environmental consequences of sea level rise, as well as adaptation and mitigation strategies. It combines intensive classroom and laboratory instruction with field trips to locations around the Venice Lagoon.

In Pan’s class, students focused on global health impacts of sea-level rise, particularly the emergence of vector-borne diseases and enteric infections.   Students participated in field-based entomological collections and learned how to apply these data to environmental characteristics, such as vegetation, temperature, and salinity.

Pan gave lectures on coupled human-natural systems and how sea-level rise can tip the balance leading to increases in morbidity and mortality.  Similar to his Bass Connections in Global Health project in the Peruvian Amazon, Pan led a field trip to collect and identify potential disease vectors using Shannon traps and demonstrated how to compute Entomological Inoculation Rates.  While vector species were limited to Aedes albopictus and Culex pipiens, human biting rates of these mosquitoes averaged over 25 bites per hour among students and faculty collecting data, equivalent to those recorded in the Amazon.  Although research linking these types of elevated disease risks to sea-level rise is severely lacking, the class trains students how to conduct epidemiological studies to examine these relationships.

Malaria, dengue, chikungunya and West Nile have either emerged or been reintroduced to Southern Europe over the past five years, primarily in coastal regions.  Historically, coastal regions are among the first to experience new diseases in a population due to their role as gateways into a country.  With ten percent of the global population (700 million people) living less than 10m above sea-level, the impact of forecasted sea-level rise due to climate change on the emergence of new infections requires considerable attention.

For more information on the course, visit the Nicholas School of the Environment. 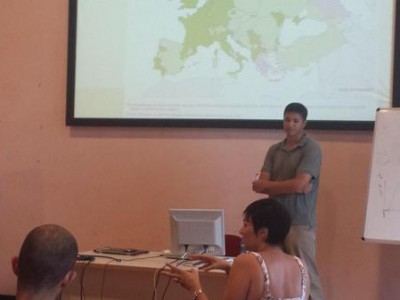