India's healthcare system has an imbalanced workforce that renders the system dysfunctional, despite sufficient numbers of health workers

When I was six, I hit the footstep of a rickshaw running on the road and broke my nose. My parents rushed me to the clinic. My mother practices there as an ophthalmologist but because the injury was minor, she decided to suture it herself. My father stepped in as the anesthesiologist, in case anything went wrong. I was back home later that day. Over the next few days, I had a few comfortable dressing and follow-up sessions and that was that. My parents had rescued my beautiful nose.

This experience had been nearly utopian: free, immediate and of good quality. But such surgical care remains out of reach of most Indians, and they often have more grievous injuries. One of my doctor-friends recently treated a child with a congenital anorectal deformity. Her parents were illiterate and lived in a rural area, so it took them almost a month to realize something was wrong. Unlike me, this child had to travel for half a day to access a doctor. Unlike me, the cost of her surgery and follow-up care will take quite the toll on the family’s income and savings. But this child is still to be presumed fortunate because millions of people in India whose lives can be saved frequently die because they can't get surgeries when they most need them.

Solving the surgical care crisis is not like a jigsaw puzzle, where you put all the pieces together to create a definite shape and win. It’s more like playing Tetris, where things are constantly falling apart and you need to do the best you can in dynamic fashion. There are health centers in India where there are surgeons but no operating rooms. There are others where there are rooms but an insufficient number of beds. If one is lucky to have both operating and enough beds, there still might not be a blood-bank, even the required types of blood or all the essential drugs – shortages exacerbated by poor sterilization practices, etc.

Successfully delivering good-quality surgical care depends on all the building blocks of the health center and their interactions. That said, the problem’s complexity shouldn’t deter us from attempting to solve it, especially now. Unlike a vaccine that is specific to a disease, surgery as a medical tool can ameliorate suffering due to a variety of diseases, from blindness to cancers, and to address disabilities due to trauma and/or injury. Second, a healthcare system able to dispense surgical care efficiently and ethically can address society’s other needs simply by virtue of its existence. For example, a system designed to deliver surgical care also includes infrastructure to run other public health programs as well.

Indeed, even if it’s a difficult problem to solve, good surgical care is (almost) the endgame of public health. The Lancet Commission on Global Surgical Care published its most comprehensive report on the topic in 2015, which reaffirms surgery as a safe and cost-effective intervention across countries and diseases.

The Karad Consensus Statement, which the members of the Association of Rural Surgeons India (ARSI) developed and which the National Surgical Forum showcased during its proceedings in 2016, strongly vouches for the need to address the rural surgical care crisis. ARSI has also pushed for rural surgery as a medical research and practice specialization.

But global calls for action and the initiatives of enthusiasts have always been insufficient to effect real change. Such change is the people’s prerogative, so there can’t be rural surgical care without a rural surgical workforce. This includes a variety of health workers: surgeons, other doctors who perform surgeries, anesthesiologists, nursing staff and other surgical support staff (radiographers, lab technicians, etc.). While the WHO has developed estimates for adequate numbers of doctors, nurses and midwives, it doesn’t provide any on the number of surgeons or surgical staff. 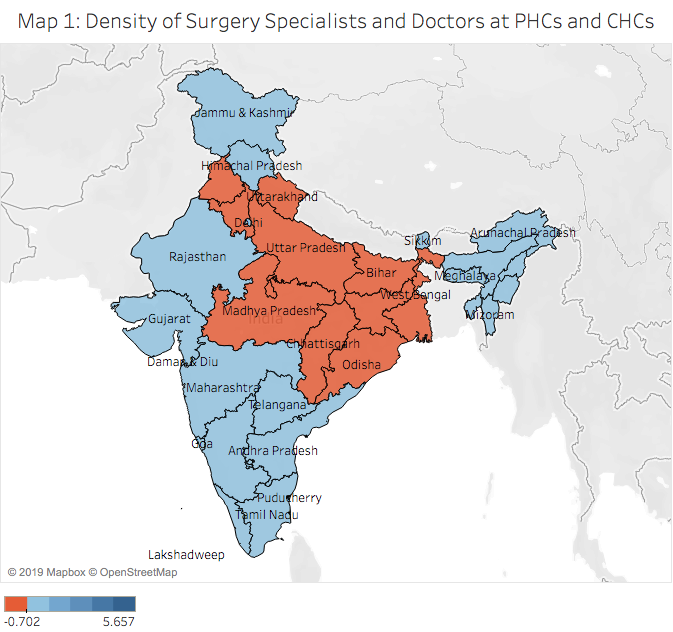 There is another, deeper problem in rural India. Consider the following charts built on data from the 2018 Rural Health Statistics (RHS), available on the website of the Ministry of Health and Family Welfare. When considered individually, they lead to some obvious observations. Map 1 depicts the density (per 10,000 people living in rural areas) of surgeons and doctors performing surgical procedures at primary health centers and community health centers for each state. The orange states have a lower density than the national figure and the blue states have a higher density. Notice the cluster of states in central and northern India that have a deficit of surgeons and doctors relative to the national figure.

Map 2 depicts the density of nursing staff. Notice the deficit in central-southern and western states. The third visualization shows the shortage of support staff – including lab technicians, radiographers and pharmacists – in the northern states along with Maharashtra and Andra Pradesh. 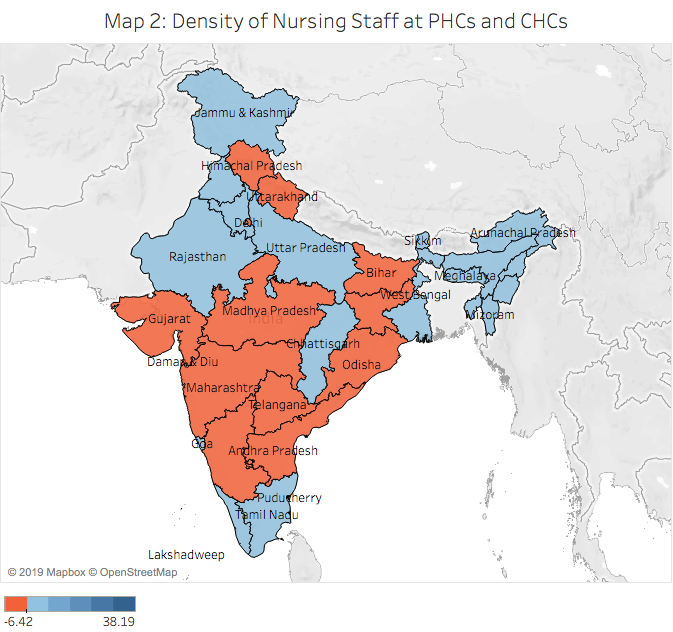 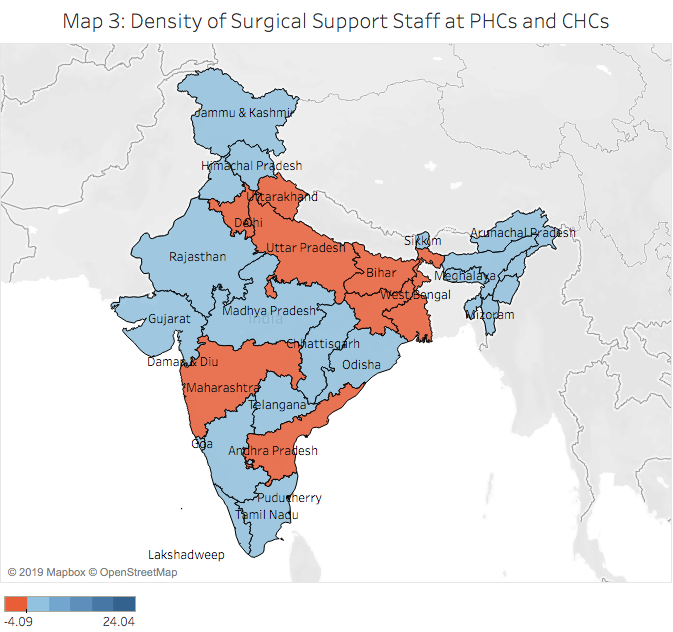 When taken together, the charts show an imbalanced workforce. There are states that have enough surgeons but not enough nursing staff (e.g. Maharashtra and Andra Pradesh). There are states that have nursing staff but not the support staff (e.g. Uttar Pradesh and West Bengal). This lopsidedness renders the healthcare system dysfunctional, and handicaps those health workers that already exist in sufficient numbers.

Altogether, it’s clear why India’s rural healthcare system is dysfunctional, particularly on the surgical care front. It’s important to note that there is also something to learn from Kerala and Tamil Nadu, which seem to be doing better in all three visualizations.

Our health policies should resolve such disparities instead of simply increasing the supply of newly graduated doctors in rural areas. The visualizations also tell us that policymaking needs to be evidence-based and decentralized: state governments are the bigger stakeholders in this context and should use official data to frame smarter policies.

Siddhesh Zadey is a graduate student at the Duke Global Health Institute, Duke University. He co-leads a research group named Asar in India. 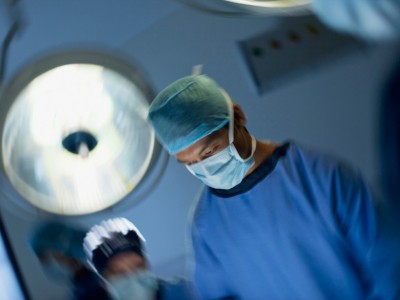 Good surgical care remains out of reach for many in India.

"Surgical care in India is like playing Tetris, where things are constantly falling apart and you need to do the best you can."

“We Have a Solution for It”

Obstetric Fistula and Mental Health: From Tanzania to Mali