As a Duke undergrad, Alex Paul's summer in rural Costa Rica, solidified her decision to become a doctor 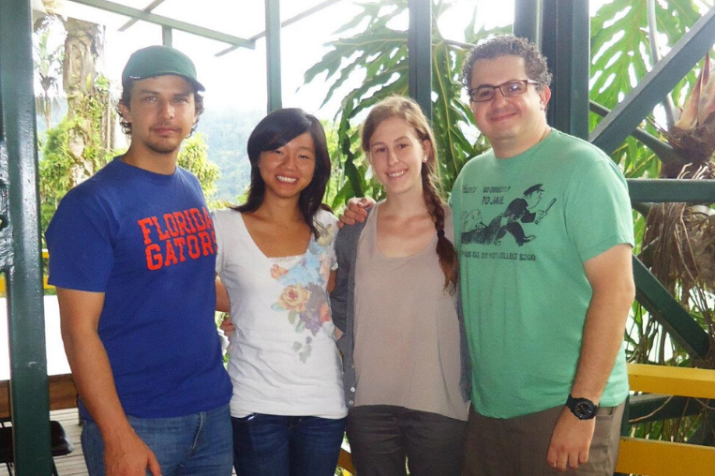 Paul (2nd from right), as an undergrad, and her DGHI mentor, Jorge Benavides-Rawson (far right) with fellow colleagues in San Vito, Costa Rica.

When Alexandra Paul reflects on the summer she spent in San Vito, Costa Rica, as a Duke undergraduate, she says it was a turning point. Her experience living in the foothills of the Talamanca Mountain range for two months, talking with community members about their health and being invited into their lives and their homes, cemented her decision to pursue medicine as a career.

“A lot of people come in as an undergrad thinking they want to be pre-med and I did, too. But my decision solidified more for me in Costa Rica because it was based on real experiences with people,” says Paul, who graduated in 2014 with a major in neuroscience and a minor in Spanish and philosophy and is now in her final semester at Duke University School of Medicine.

Between her sophomore and junior year, Paul traveled to San Vito, a rural area in southern Costa Rica close to the border of Panama, to participate in a student research training program through the Duke Global Health Institute. The program centered around studying risk factors related to the high rate of gastric cancer in rural Costa Rica.

“Our goal was to go in and do some home interviews and suss out dietary habits and daily behaviors. Costa Rica has a really high rate of gastric cancer and it’s not clear why—maybe it’s due to a lot of salty food intake or smoked meat consumption,” says Paul.

The study included two cohorts of people, one of healthy patients and the other made up of people with gastric problems, everything from gastritis to stomach cancer. The project was run by former DGHI faculty member Jorge Benavides-Rawson, who taught tropical medicine and public health and was a mentor to students in the Costa Rica summer fieldwork program before leaving to pursue a doctoral degree at The George Washington University.

“We did about 100 home interviews per group, asking about diet and access to healthcare,” says Paul, who conducted all of the interviews in Spanish. Years of high school and college Spanish classes, as well as study abroad time in Spain, helped her communicate with participants.

“I absolutely loved hearing their stories and about their lives. I got to know them on a deeper level. Everyone was so friendly. I can’t imagine doing the project we did there, here. Going house-to-house, conducting health surveys in the US—they would have slammed the door in our faces. But in Costa Rica, people were so interested and said ‘yes’ and invited us into their homes,” Paul says.

Another one of her favorite things about the trip was the food. “I gained so much weight because I ate so much food—homemade tamales and mangos right off of the trees,” she says.

Advice to other students

Paul has a few pearls of wisdom for other global health and medical students thinking about working in another country or a new community: Be willing to put yourself in a situation that isn’t necessarily comfortable.

“Dealing with discomfort and uncertainty and realizing things won’t go your way, I still talk about it in my residency interviews to this day. Anytime you’re going into a new situation and dealing with people who think differently and have a different skill set, you have to be open to that. Have a plan and go in prepared, but expect nothing is going to go as you expected,” Paul says.

“There will be people with more experience and knowledge—I think that holds true of anything. And when you’re going into a new community center, just realize you are not the most important person there. Coming from Duke, it’s especially important. Make sure you’re being humble and valuing the experience. Learn humility,” Paul says.

What does the future hold?

Paul would love to go back to Costa Rica one day, but her next steps include heading to Tanzania in April to work on a project with DGHI’s Catherine Staton, assistant research professor of global health and assistant professor of surgery and neurosurgery.

“She has a big trauma registry in Moshi that includes people who’ve had injuries to their extremities or pelvis. I’m going to parse out data—looking at who’s not getting surgery. And we’re hoping to look at quality of life data for those patients and how they do post-hospital,” she says.

And, planning on a specialty in orthopedics, Paul is looking forward to “Match Day” this month, when she’ll learn where she’s headed for her residency for the next few years.