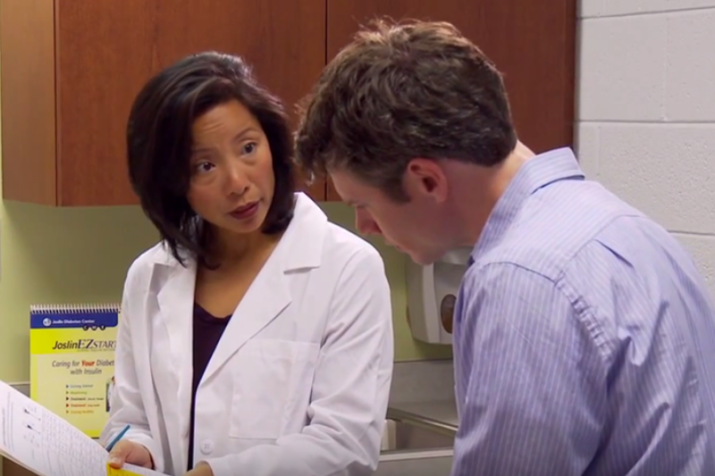 An image from a video used in the study to train medical providers on conducting brief alcohol counseling with hepatitis C patients. (Photo courtesy of Duke Liver Clinic via AddictionMedicineUpdates/sbirt/.org)

Any chronic illness can be challenging for doctors and their patients to manage from both a physical and mental health perspective, but when substance abuse is part of the mix, it becomes even more complicated.

That’s what fueled Duke hepatitis C researcher Andrew Muir and Duke Global Health Institute’s Rae Jean Proeschold-Bell, a psychologist and associate research professor of global health, to collaborate together on a study published in print this month (and online this past December) in Hepatology. Knowing that hepatitis C and alcohol use combined can increase a patient’s risk for liver damage, they were interested in developing a randomized controlled trial that looked at whether or not a clinic‐based alcohol intervention program helps people with the disease cut back on drinking. They were surprised by what they found.

Proeschold-Bell and Muir said they made some important discoveries that doctors at Duke’s Liver Clinic were able to immediately put into practice.

For their study, Proeschold-Bell, Muir and colleagues followed 181 patients with hepatitis C who reported using alcohol. The patients, from three North Carolina liver centers — Duke, UNC and the Durham VA Medical Center — were randomly assigned to one of two groups:

• Medical provider‐delivered Screening, Brief Intervention, and Referral to Treatment (SBIRT), in which the liver provider reviews with patients their alcohol responses, and uses motivational interviewing and very brief counseling in hopes of getting the patient to accept a referral out for alcohol treatment.

• SBIRT plus six months of “integrated co‐located” alcohol therapy, meaning they received multiple sessions of alcohol counseling from a social worker in the liver clinic.

In both groups, healthcare providers had undergone a couple of hours of training in order to deliver SBIRT.

For the group that received SBIRT alone, hepatitis C patients’ mean therapy hours — occurring through outside referrals — tallied 8.8 across six months. For those who underwent SBIRT and alcohol use counseling in the liver clinic, the mean therapy hours were 10.1. In both treatment arms, alcohol use was lower at 3, 6, and 12 months later. Alcohol use improvements were seen in the average grams of alcohol consumed per week, the number of heavy drinking days, and even the number of participants exhibiting full alcohol abstinence, the authors say.

“Many studies have shown that high rates of patients won’t follow through on alcohol treatment referrals, because they can’t afford it or just don’t feel comfortable going somewhere else. So that’s what we expected this time,” Proeschold-Bell says.

“What we found instead is that with provider-delivered counseling and referrals from our study team, patients got better, to the same degree as those who received multiple therapy sessions in-house,” she adds.

Duke Liver Clinic physicians took what was learned from the study and put it into practice right away, including offering hepatitis C patients counseling care within their clinics.

“Liver clinics should consider implementing provider‐delivered SBIRT and tailored alcohol treatment referrals as part of standard of care,” says Proeschold-Bell, adding that there is work to be done to figure out who would make the referrals out.

“Clinics would need to designate someone. Still, this approach is likely cheaper than hiring social workers,” she says.

Muir, professor of medicine and chief of the Division of Gastroenterology in the Department of Medicine at Duke University School of Medicine, says it gave providers tools that they found empowering to help their patients with substance use.

“There were positives for the medical providers, too. We heard across liver clinics that the SBIRT strategy was really helpful,” Muir says.

There’s a lot of stigma for hepatitis C patients, even within the healthcare community, Muir points out. That impacts a patient’s behaviors and may keep them from seeking mental health counseling.

“But we as clinicians see that your mental health diagnoses — your anxiety around a diagnosis — impacts your experience and outcomes. Treating mental health disorders is a key part of any multidisciplinary care,” he says, adding that as hepatology providers, the study also helped them become more comfortable prescribing drugs for addiction.

“The other positive thing for me was working with psychologists. It was enjoyable to collaborate on research but also on clinical care. It’s rewarding. You feel like you’re growing in your own career. Through providing SBIRT and working with the on-staff social worker, many clinicians said they enjoyed caring more and came to see how the mental health component is involved. Those skills are in play every day in our clinic now in a way that they weren’t before the study,” Muir says.