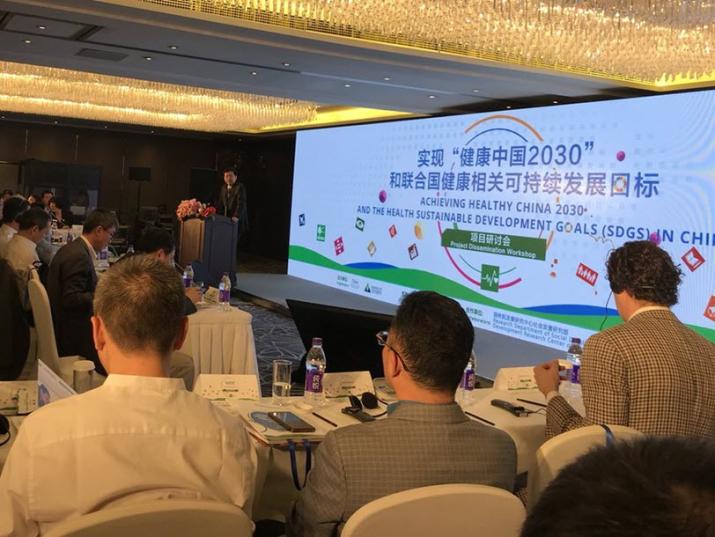 The study findings were presented this past weekend at an event in Beijing. Photo by John Ji.

Drawing on lessons learned from international and domestic experiences, the research team examined China’s current health landscape both nationally and in three regions reflecting different levels of socioeconomic development. They reviewed and synthesized China’s achievements in implementing the health-related MDGs and identified gaps and barriers to addressing specific health issues. Based on past trends, they projected the attainment of the health-related SDGs in specific areas.

The goal of the two-year project, funded by the Bill & Melinda Gates Foundation, is to help the Chinese government develop and implement feasible, effective health policies to achieve the health-related SDG goals. To this end, the team, led by Shenglan Tang, the Mary DBT & James Semans International Professor of Medicine and Global Health at Duke University and executive director for global health programs at Duke Kunshan University in China, proposed evidence-based recommendations for both central and local governments.

“In the next decade or so, China must adopt more proactive health interventions in order to tackle increasing health challenges, targeting the vulnerable and those with high risk factors,” said Tang.

By 2015, China had achieved a majority of health-related MDG targets: reducing infant and under-five child mortality rates and maternal mortality ratios; improving nutrition and reducing stunting and wasting among children; and controlling HIV/AIDS, tuberculosis, malaria and the prevailing neglected tropical diseases. However, disparities in the control of these health challenges persist across regions and populations, with the eastern provinces generally faring better than those in the central and western regions.

China has also already met many health-related SDG targets set by the United Nations for 2030, mainly in the areas of maternal and child health, immunization service coverage and malaria control.  But despite this progress, the research team estimates that by 2030, the majority of the provinces in China will probably achieve only about half of the health-related SDG targets, while some of the less developed provinces may reach only a third of the targets.

The health challenges that China will likely have the most difficulty addressing are child obesity, non-communicable diseases such as diabetes and hypertension, mental health, hepatitis and TB, especially multi-drug resistant tuberculosis. Many of these health problems are on the rise in China, due in large part to behavioral risk factors—including smoking, alcohol use, unhealthy diets and physical inactivity—and lack of access to affordable health services.

In addition to assessing China’s ability to meet the health-related SDGs, the researchers analyzed China’s likely progress in achieving the goals outlined in Healthy China 2030, a key initiative of the Chinese Communist Party Central Committee.

The research team offered two sets of evidence-based policy recommendations—one linked specifically to achieving the health-related SDG and Healthy China targets, and the other directed toward improving the general health and welfare of the Chinese people.

Recommendations related to the health-related SDGs include:

The second set of recommendations taps into sectors beyond healthcare to promote the health of the Chinese people. These proposals include improving living standards, enhancing infrastructure and systems for basic services such as sanitation and transportation, further developing the social security system for better social justice and fairness, promoting health education and strengthening environmental protection. The researchers also call for increased investment in health, better healthcare financing to promote broader access to healthcare, and more funding for public health programs and preventive services.

This project is led by the Duke Global Health Institute (DGHI) in the United States and Duke Kunshan University in China. DGHI professors Mary Story and Gavin Yamey serve as co-principal investigators.

The project team includes collaborators from the Development Research Center of the State Council, the China National Health Development Research Center, Fudan University, Wuhan University, Kunming Medical University and Chongqing Medical University. The project also obtained strong support from Institute of Health Metrics and Evaluation at University of Washington, the China CDC and the National Center of Health Information and Statistics, as well as government agencies from Jiangsu, Hubei and Yunnan Province.

The project findings and recommendations were shared at an event at the China World Hotel in Beijing on May 5. The event was organized by Duke University and Duke Kunshan University with support from the Bill & Melinda Gates Foundation and the Research Department of Social Development, Development Research Center of the State Council.