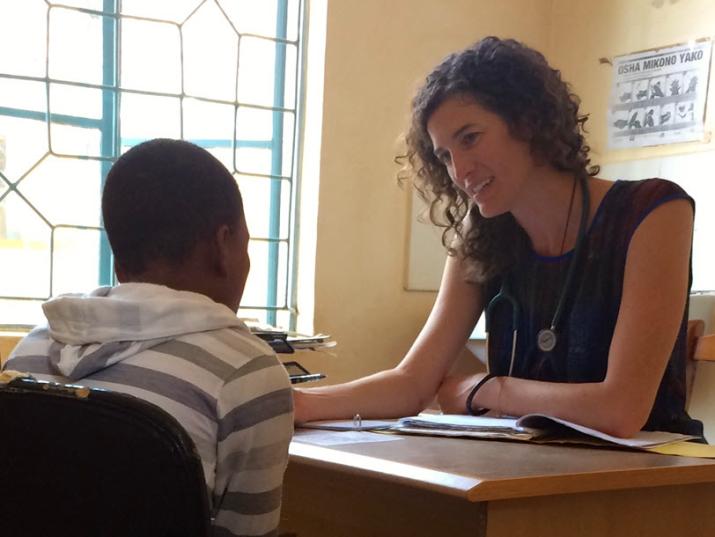 Dorothy Dow had been working since 2011 in a clinic in Tanzania, focused on pediatric infectious diseases and prevention of mother-to-child transmission of HIV, when she observed something troubling: HIV mortality rates were increasing among teens even as they declined in most other age groups.

The deaths weren’t caused by the virus itself or lack of access to treatment, said Dow, but by the stigma associated with being diagnosed with the illness and teens’ inability to cope mentally with the news. “There was an adolescent HIV epidemic unfolding and youth were committing suicide. I wanted to dig deeper into this and find out why it was happening,” said Dow, an assistant professor of pediatrics and global health and 2012 alumna of the Duke Global Health Institute’s Master of Science in Global Health program.

Having gone to Tanzania to conduct biomedical research into HIV, Dow shifted her focus to the mental health of teens with the disease, most of whom had been infected perinatally. She harnessed the Fogarty Global Health Fellowship she was awarded and in 2014 began conducting research to try to better understand the psychological difficulties experienced by youth living with HIV in Tanzania.

As she compared the interventions used for HIV-positive teenagers at the Kilimanjaro Christian Medical Center (KCMC) with those at the nearby Mawenzi Government Hospital, Dow found that the rate of mental health problems among teens at Mawenzi was double that at KCMC. One key difference between the two healthcare facilities was that KCMC ran a clinic just for teens, while the other had no such program.

Dow and her colleagues presented data they’d gathered to Mawenzi, showing the difference in outcomes between its approach to HIV-infected teens and that of KCMC, and encouraged the hospital to offer a clinic where those adolescents could discuss not only prevention and treatment options but also the mental health issues associated with the disease.

Supported by Fogarty and the National Institute for Mental Health (NIMH), Dow is using her grant to research how to improve teenagers’ HIV outcomes and adherence to antiretroviral therapy by addressing the mental health treatment gap that exists in Tanzania.

“We’ve helped more and more children survive until their teenage years through interventions such as preventing mother-to-child transmission and by raising awareness of what causes HIV, but once they hit adolescence, we start to lose them,” said Dow. “Around half of new HIV cases in Tanzania occur in the 15-24 years’ age group, and there are no mental health professionals available to help them with the psychological distress of living with HIV. I think that’s because we’ve neglected the social determinants and the mental health components, and because the youth need to be at the table with us, to help us figure out how to help them.”

With 85 percent of the world’s HIV-infected teens living in Africa, the continent is the best place to conduct meaningful research into the intersection of HIV infection and adolescents, Dow said. But she insisted her research results from East Africa are highly relevant to the United States.

This article was slightly adapted from an article that first appeared in Fogarty International Center’s Global Health Matters newsletter and was republished with permission.