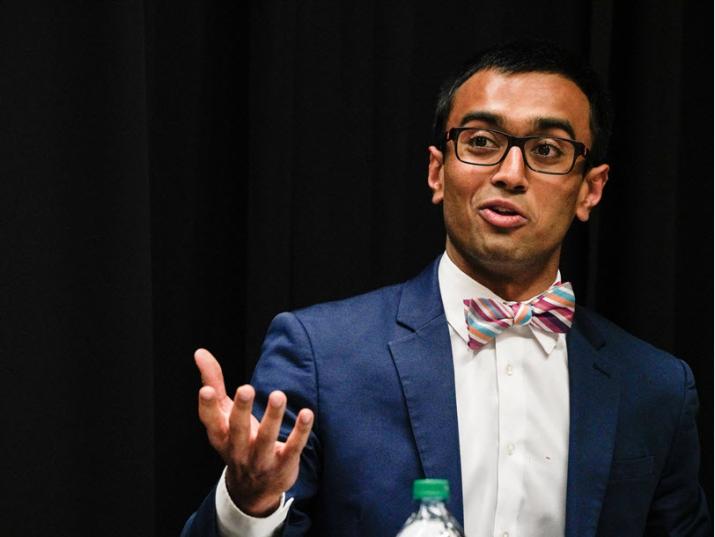 Noor Tasnim was selected by his classmates as the student commencement speaker. Photo by Jim Wallace.

Fifty-five of the graduates majored in global health and three graduates completed Program II studies in areas including global health. Program II is an interdisciplinary program of study designed by individual students to meet their unique academic and intellectual goals.

Twelve students graduated with distinction in global health—that is, they demonstrated academic excellence through the successful completion of a substantive written project evaluated by a faculty committee.

DGHI director Christopher Plowe opened the ceremony, welcoming the graduates and their guests. “You now have a foundation of knowledge and technical skills to make a difference in the lives of the communities you work with,” he said. “But more than that, you have your humanity. You’ve shown yourselves to be curious, passionate and committed to social justice.”

Plowe encouraged the graduates to stay true to their values and nurture them in others. “And if you do,” he said, “I promise the world will feel the impact of your work.”

Toole encouraged the undergraduates to continue trying new things and not be afraid to stray from the beaten path. Sharing an excerpt from a 2016 commencement address by PayPal co-founder Peter Thiel, Toole urged the graduates not to get caught up in the pressures from themselves and others, only to find themselves on a track that will not lead to fulfillment.

“It seems to me that as global health majors, you have become adept at planning for the future,” he told them, “but you always have to be on guard against a plan for the future that turns out to be an alibi for the present.”

Listen to the full remarks by Plowe and Toole.

STUDENT SPEAKER REFLECTS ON WHAT MAKES DGHI A FAMILY

This year’s undergraduate commencement speaker, global health and evolutionary anthropology major Noor Tasnim, reflected on the DGHI family, or “FAM” for short. The acronym FAM, he said, represents flexibility, academics and meaningful connections—three critical components of his time at Duke.

Tasnim shared how his fieldwork experiences helped him become more resilient and flexible. “It’s okay for things not to go according to plan,” he said. “They hardly do anyway. What’s more important is to work with what we have and try our best.”

He noted that the global health courses are among the most unique at Duke and marveled at how his two majors dovetailed. And he reminisced about the relationships he built with other students and the personal attention he received from his professors.

The next summer, Tasnim traveled to Mandena, Madagascar, to examine differences in foot morphology between males and females among a population of people who don’t wear shoes. This research will help guide future interventions to reduce risk factors that may cause debilitating foot pain.

Tasnim plans to attend graduate school eventually to earn a PhD in biomechanics. His long-term goal is to address disparities in musculoskeletal health locally and globally.

Watch the recognition of graduates.