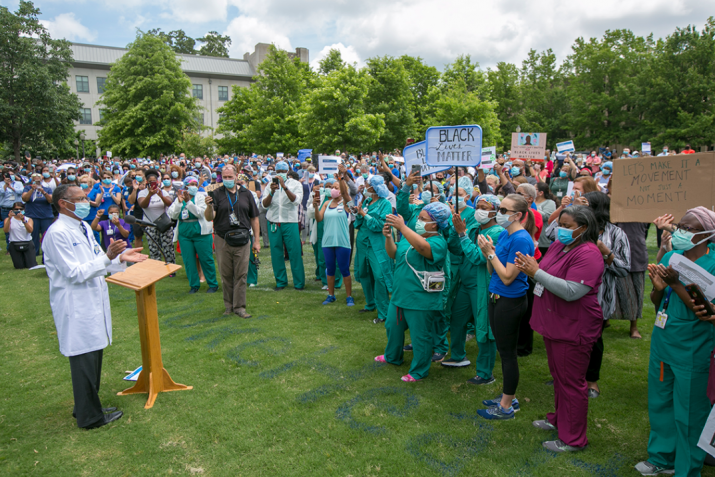 Duke Health Chancellor Eugene Washington speaks following the march in front of the courtyard between Duke Medicine Pavilion and the Cancer Center. It is part of a national movement of “White Coats for Black Lives” with many wearing white coats as a sign of support.

Note: DGHI invites nominations of current faculty, staff, students or alumni to serve on the newly formed equity task force. You may nominate yourself or someone else by completing this short nomination form by 9 a.m., Tuesday, June 16.

The Duke Global Health Institute (DGHI) has launched a task force to identify and address structural inequities related to race, gender and all marginalized identities across its research, education and outreach missions.

Chaired by Kathryn Whetten, DGHI’s associate director for community and culture, and Kimberly McNeil, its director of diversity and inclusion, the task force will recommend and implement concrete actions to improve equity, diversity and inclusion in all facets of the institute’s work, including its curriculum, recruitment and hiring practices, student admissions, research programs, and engagement with partners and communities around the world.

“As a global health institute, we stand against racism and the structural forces that have left so many people marginalized,” says DGHI deputy director Shenglan Tang. “But saying it isn’t enough. We need to be sure our practices and actions are consistent with these values.”

The task force will build on several efforts during the past few years to advance equity within the institute and in the global health community more generally. It will work closely with DGHI’s Community, Diversity and Inclusion Committee, which will continue to offer ways for faculty, staff and students to reflect on issues of equity and unconscious bias. It will also advise DGHI leadership on policies and practices that can advance equity, such as exploring ways to enhance voice and participation from global partners.

Another aim of the task force will be to facilitate implementation of recommendations made by the Decolonizing Global Health working group, a student-led initiative that calls for a greater focus on global health’s links to colonialism and structural biases in courses, as well as increased focus on anti-racism training and discussion. Task force members will work with faculty to incorporate such lessons into fall courses and plan a seminar series to explore historical and current inequities in global health.

The task force will also study recommendations made in a letter submitted to DGHI on June 9 and signed by more than 100 Duke global health students and alumni, which called on the institute to take new steps to address historical and current inequities and biases in its education and research programs.

Whetten and McNeil say that recent events – including the international outcry over race-based police brutality and violence, as well as the deep racial disparities in the impact of COVID-19 – underscore the need to accelerate change within DGHI’s community.

“Global health fundamentally seeks to eradicate disparities that exist for marginalized communities, and so it follows that we should be leaders in breaking down those barriers,” Whetten says. “We’ve done a lot of work over the past few years, and have a lot more to do.”

“The past few weeks have shown us that opposing racism begins with examining ourselves,” says McNeil. “We need to be asking how we are creating or contributing to barriers in our own community, and in the communities we work with around the world.”

The task force will include DGHI faculty, staff, students and alumni, and Whetten and McNeil hope to have broad representation across DGHI’s units and centers. The idea was suggested by Shashika Bandara, an alumnus of the MSc-GH program and member of the Community, Diversity and Inclusion committee, as a way to bring current and former students into the discussion.

“One of our goals is to use the task force as a way to initiate action that ripples through DGHI and Duke,” says Whetten. “We want members who will be committed to going back to their teams to think about what they can do to break down structural barriers in their own areas.”

The co-chairs plan to organize several community forums over the summer to gather input and create a road map for the task force’s work.

“This will only be a productive effort if it involves everyone – including faculty, staff, alumni and students at every level,” says McNeil. “This is about all of us working together to create real, sustained change.”