DGHI joins in the Friendship Games 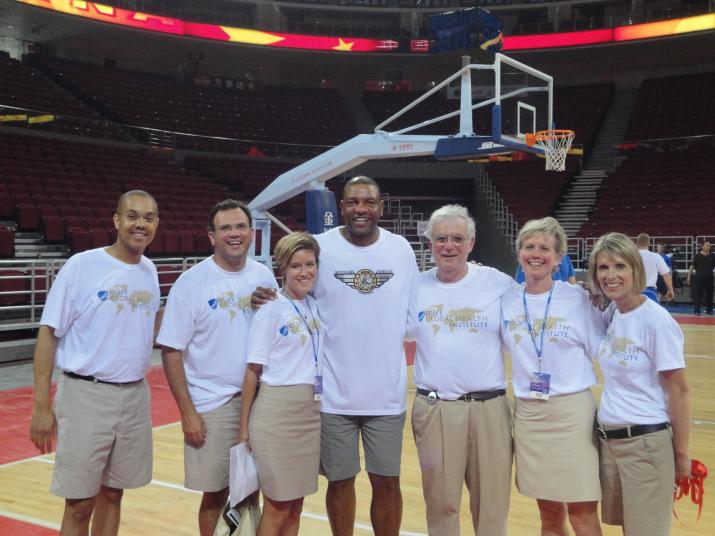 DGHI took advantage of the power and influence of the Duke Men’s basketball team to further its reach and to thanks its Chinese partners at the 2011 Duke-China Friendship Games.

With the team, coaching staff and about 100 members of the travel party in tow, DGHI Director Michael Merson welcomed the group to Beijing on August 20 during a traditional dinner of Peking duck. On the morning of Aug. 21, Merson, DGHI faculty member Gary Bennett, and Lijing Yan, a collaborator at the George Institute for Global Health-China, provided the travel party with an overview of the health challenges in China, specifically the rapid rise of cardiovascular disease and obesity. Participants remarked at the similarities between the health concerns in China and the US, while also acknowledging the reliance of the US on China as an economic partner.

Later that day, more than 100 children and families from Peking University and the surrounding community were treated to a rare look inside the practice of the Duke Men’s team. Prior to the practice, Bennett spoke to a group of enthusiastic children about the importance of exercise to prevent obesity. Bennett also led the children in a dribbling game, while the Duke players cheered them on from the sidelines. Later in the practice, the group was greeted by Duke standout Nolan Smith and Celtics Head Coach Doc Rivers, whose son Austin joins the team this year.

Finally, on Monday night the Blue Devils took the court against the Chinese Olympic Team in front of an audience of 6,000 people, including more than 100 guests from the Chinese Ministry of Health, Peking University and the George Institute for Global Health. NBA superstar Yao Ming even took the court at halftime to a roaring response from our Chinese friends.

While the Blue Devils defeated the Chinese team 93-78, the feelings of friendship, partnership and commitment to the common goal of improving global health were evident throughout the evening.

See the photo slideshow of the DGHI events in Beijing.