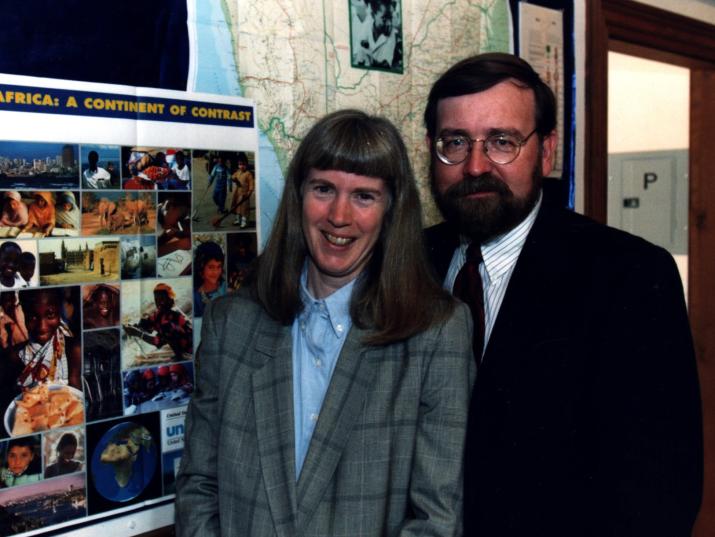 Ruthann and Jan Tore Hall before their initial departure for South Africa in winter 1999-2000.

Editor’s note: We’re pleased to highlight the fourth in a series of profiles that highlight qualifying gifts for the Bill & Melinda Gates Foundation Global Health Matching Grant. This dollar-for-dollar match is reserved for gifts that support priority areas for the Duke Global Health Institute: education programs, graduate fellowships, faculty support and international partnerships. Unrestrictive gifts for use at the discretion of the Institute director may also be given.

Jan Tore Hall ‘73 recently established the Siyathinta Global Health Fund to support research opportunities for undergraduate, graduate, professional and doctoral students to study emerging infectious diseases in Africa, with a focus on improving treatment delivery and care. Preference will be given to research projects related to HIV/AIDS in South Africa.

Duke Is Much More than an Alma Mater to Hall

Jan Tore Hall graduated from Duke with a degree in economics and political science. He met his wife, Ruthann Huling Hall ‘73, at the beginning of his sophomore year on the sidelines of a Duke-Maryland football game, and they were married by the end of his junior year.

“Duke constituted the place of origin for Ruthann and me,” Hall reflected. “It is where we met, where we came to know each other, and where we began the time and life together that continued for four decades more.” Huling, who was “everything to, for and with” Hall, died of cancer in 2012 at age 59.

Their memories and shared experiences—at Duke and later in life—inspired the couple to include Duke in their wills. Prior to establishing the Siyathinta Global Health Fund, Hall made a number of other gifts to Duke dedicated to the memory of Huling.

Hall and Huling Felt Called to “Do More”

Hall and Huling had successful careers—Hall was a lawyer and Huling was an investment actuary—but they wanted to “do more in the world.” In 1998, they started discussing the possibility of volunteering in some capacity overseas, perhaps through their church.

At the time, Hall and Huling were touched deeply by the AIDS scourge in southern Africa, and their personal connections to southern Africa further shaped their interest in volunteering in that part of the world. When Huling was younger, her parents hosted a student from Rhodesia who had come to the U.S. to study engineering; their family had kept in touch with the student on and off. And Hall says that, were it not for Norwegian missionary regulations at the time, his parents—who were studying to enter the mission field—would have been living in Rhodesia when he was born.

After much soul-searching and discussion, they decided to become missionary volunteers in South Africa. They completed a two-year stint in Durban as administration consultants and outreach assistants before Huling was diagnosed with cancer. After her surgery and initial treatments, they returned to South Africa for part of each of the next several years until Huling’s health prohibited them from traveling. During this time, working from both the U.S. and South Africa, they planned and facilitated a long-term effort to get churches in Massachusetts—their home state—to establish relationships with counterparts in the KwaZulu-Natal region.

Through contacts from their volunteer work, Hall and Huling developed a connection between their church in Concord, Massachusetts, and an HIV/AIDS care center attached to a missionary hospital in Durban. Hall and Huling’s church donated Christmas and Easter offerings, as well as proceeds from the sales of traditional South African beadwork products, to the center.

Their relationship with the center and its director continued over many years, and they were moved to make a bequest to the center in their wills. However, in recent years, the center and hospital were absorbed into the state medical system and the purposes altered, prompting Hall to reconsider their bequest.

“I wondered whether there was something in Duke’s arsenal that could fit the bill,” Hall said. “I was looking for something that would reflect the original intention of our bequest to the Sinikithemba Centre of that hospital in Durban, which was to support their work in providing care and treatment for HIV/AIDS and other chronic diseases.”

After learning about DGHI’s HIV/AIDS work in Africa, Hall contemplated making a bequest to DGHI, but he instead opted to make a present gift to take advantage of the Bill & Melinda Gates Foundation Global Health Matching Grant and the leverage it affords. And this is how the Siyathinta Global Health Fund came to be.

“The name relates to the purpose of the fund, which is an emphasis on bettering care and treatment,” he said. “If this gift is used toward that goal—a true part of medicine, if not always of science—within the overall progress of DGHI’s efforts, I’ll be happy, as would Ruthann have been.”