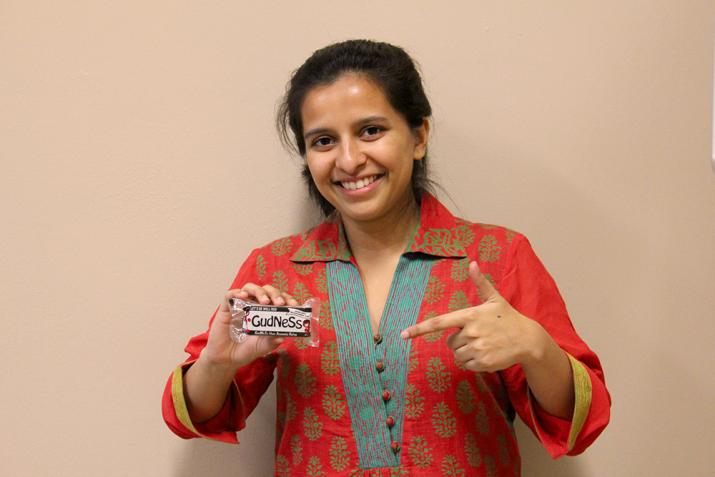 After suffering from anemia herself and realizing the scope of the problem in her home country of India, Duke medical student Rajvi Mehta has made it her mission to combat the nutrient deficiency. Iron-deficiency anemia is the most common and widespread nutritional disorder in the world, and in India, it affects 900 million people.

Rajvi is founder of the social venture Let’s Be Well Red, which is working to make high-protein nutritional bars more accessible in India. In 2012, she led efforts to develop a simple and delicious solution to anemia called the GudNeSs bar. The bars are made from local ingredients and contain the World Health Organization daily recommended dose of iron.  Rajvi and the team, which now includes 15 other Duke medical students, have produced more than 70,000 bars to date and they are available in retail stores, NGOs and schools across three states in India.

Today, Rajvi and the team are raising money to expand their efforts and maximize their impact. They want to expand the availability of GuDNeSs bars to hospitals, airlines and government schools. They also want to raise enough money to open a new production unit in South India in an effort to produce more bars and reduce transportation costs.

Rajvi says she’s determined that her venture will succeed in fighting anemia because it’s based on a model of accessibility, sustainability and empowerment. They are using the sales of bars in urban centers to subsidize the production of the bars in rural areas. The team is also training women how to make the bars in local production units, and empowering high school students to raise awareness about anemia at the grassroots level.

Visit their fundraiser page and support Let’s Be Well Red!  Why? It’s a great example of Duke students becoming leaders and mobilizing resources, knowledge and passion to make a difference in global health.

Rajvi was recently featured in the Indian magazine Femina.