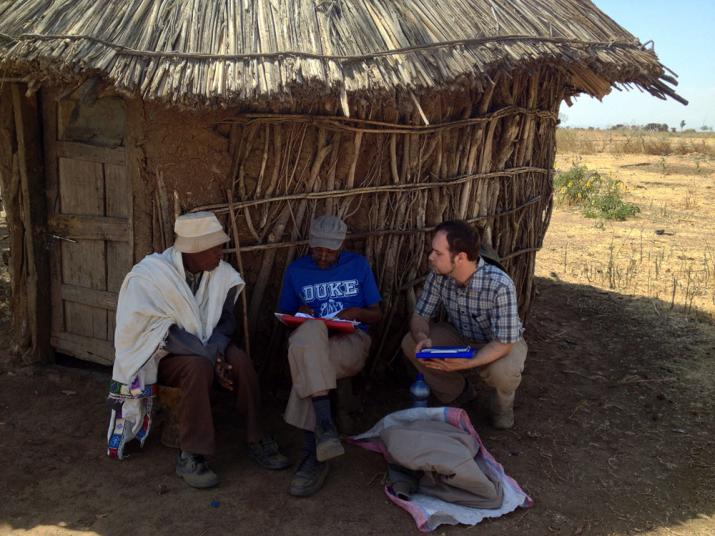 Ethiopian scientists collaborated with Duke researchers to conduct a household survey on health and climate adaptation in the Ethiopian Rift Valley. On the right is DGHI doctor scholar Chris Paul.

In rural Ethiopian communities threatened by climate change, communities with high levels of trust between members are more likely to work together to adapt to changes and are less likely to take individual action, a new study finds.

The study was recently published online in Global Environmental Change.

Working Together Is Critical to Success

The Ethiopian Rift Valley is a sparsely populated, semi-arid region in southwestern Ethiopia. Most communities rely on subsistence farming, and income levels are well below the national average. The communities are very rural and fairly isolated from external resources. This combination of environmental and economic factors makes them particularly vulnerable and unable to adapt to current climate change effects such as changing rainfall patterns and increasingly variable temperatures.

Because of limited financial and environmental resources, the level of social capital, or the degree to which community members can work together and share resources, is increasingly important.

“This paper is part of a larger investigation into how households adapt to environmental stressors in the Rift Valley,” says Paul. “We were initially interested in water quality, and then we realized it’s a much bigger picture about the questions of livelihood and subsistence in the Rift Valley, and climate change plays a big role.”

In the study, Paul and his colleagues worked with Ethiopian researchers to survey 400 households and interview community representatives across 20 villages. They measured levels of trust between individuals using a survey and a money-lending experiment where participants lent and returned varying amounts of money to anonymous partners.

They conducted a separate lottery experiment to measure individuals’ willingness to take risks, to determine if the participants’ behavior in the first game reflected their levels of trust or their risk preferences. The researchers then compared these results with the degree to which individuals take part in community-level versus household-level adaptations to climate change.

Household-level adaptations mainly involved modifications to farming practices, such as changing the timing of planting and harvest, diversifying crops, altering the number of livestock or crops, and using newer technology.

“These findings are consistent with the ideas of social capital,” says Paul. “It’s important because community-level activity and collective action are important sources of adaptations, but so are household-level adaptations.”

The ultimate goal of the research, says Weinthal, is to engage with the policymaking community to inform decision making. “We’ve been very conscious of trying to make sure our results are policy relevant,” she says.

“There are clear lessons that could be generated from this research about how to target climate change policy in a way that would be more effective in helping individuals and households cope with climate change impacts in the water sector and agricultural sector in Ethiopia, and at the end of the day build resilience.”

Collaborators from Multiple Disciplines Had Hand in Study

Along with Paul, Weinthal and Jeuland, Marc Bellemare, associate professor in the Department of Applied Economics at the University of Minnesota, co-authored the new study, which is part of a broader, interdisciplinary project looking at environmental health, climate change, and water management in Ethiopia.

Funding for the study was provided by the Duke Office of the Provost and the United States Agency for International Development.

Originally published on the Nicholas School of the Environment website and reprinted with permission.