How a Word Embodies a Model of Care

“Didi”—one of the simplest words in the Hindi language—has always meant a great deal more to me than its two syllables might suggest.

Published October 11, 2018 under Voices of DGHI 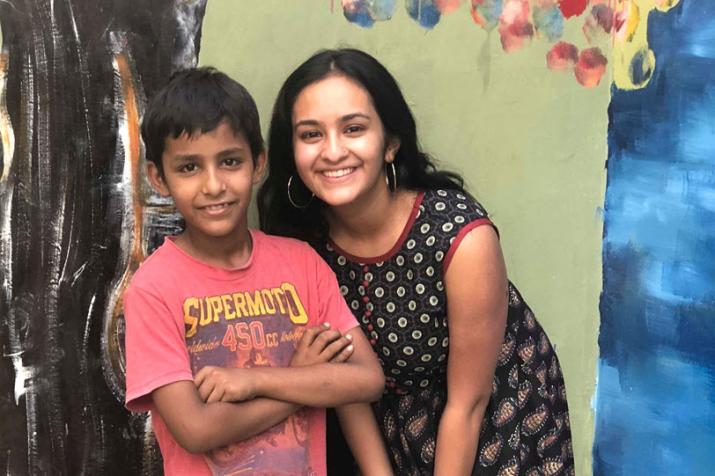 Posing alongside one voice in the chorus that greeted me with “Hi, Didi!” on our first days at Udayan Care

“Didi”—one of the simplest words in the Hindi language—has always meant a great deal more to me than its two syllables might suggest. Didi means elder sister in Hindi and is what my younger brother has called me his whole life.

The word took on even greater meaning for me this past summer, when upon entering every residential home during my global health fieldwork in Delhi, kids would greet me enthusiastically, saying “Hi, Didi!” The greeting brought to me a little piece of home and a reminder of the importance of family, especially in the lives of the orphaned and vulnerable children that I was interacting with.

Udayan means eternal sunshine in Sanskrit, and our community partner Udayan Care, an NGO in Delhi, India, was named for its aim to bring support and hope into the lives of underserved sections of Indian society. I connected with the organization because of more than just its core mission, however. I was drawn to it because of the first person who ever called me Didi.

His name also just happens to be Udayan, and he is my younger brother.

Udayan and I were brought up in the United States by parents who valued their traditions and customs and encouraged us to connect with our culture by celebrating Hindu festivals in grande fashion, speaking to us in Hindi around our home and taking us on two trips to India every year. The India that we grew up learning about and exploring was colorful, delicious and diverse beyond belief. But it was also sheltered.

Our parents never blinded us from the realities of the nation’s overwhelming pollution, overpopulation and homelessness, but the stunning number of the country’s orphaned and vulnerable children and how they might be cared for cemented itself in an image of an orphanage mostly influenced by cinema. I had come to think of orphanages in India as institutions with either symmetrical rows of beds and a guiding ideal of perfection or categorized by extreme neglect and deception, as pictured in movies like Lion.

This notion was overturned during my fieldwork in India when I became acquainted with alternative types of institutional care that try to foster a sense of family as part of their care models.

The welcoming nature of Indians and the importance they place on family is hard to miss. This emphasis on family is one rooted in the value that Indian culture—and other collectivist cultures—place on unity with others.

In reality, however, this sentiment is one that escapes so many individuals in the nation. More than 25 million Indian children live without parental care—a number that includes those children who made my heart flutter daily when they called me Didi.

Only 1.4% of these children ever receive formal alternative care. The other millions of children find themselves separated from their biological families, often living on the street or in other vulnerable situations—at a high risk of abuse and exploitation, and faced with the burden of their traumatic pasts.

Udayan Care has worked for more than 19 years to provide orphaned and vulnerable children with a child-centric model of care. Through its Ghar program, the organization has tried to model holistic development for its children, and the ghars align with other efforts in India to remodel care facilities for orphaned and vulnerable children. The paradigm shift involves moving away from care models with low staff to children ratios to focusing more on allowing children to grow up in a family-based setting.

Each ghar serves as a long-term residence for around eight to twenty children. The care network generally includes two live-in caregivers, a head caregiver, mentor parents (who serve lifetime volunteers), professional social workers and mental health care professionals. In the eight weeks I spent with my fellow student researchers, we visited 13 of the ghars in Udayan Care’s program.

The heart of each ghar lies in more than the security of its four walls.  It is the sense of family that Udayan Care’s mission is rooted in and that it tries to nurture through its network of care staff. It is reflected in the artwork that cover the walls of each home, thoughtfully painted by its residents.

Paintings on the walls of the Udayan Care ghar located in Gurgaon, Haryana

I left India with sunburnt skin and mosquito bites that outnumbered the days I had spent in the country. I left with an encrypted laptop full of excel sheets with hundreds of data points—130 children’s most intimate feelings and secrets.

But I also left with a deeper understanding of the mental and physical health issues orphaned and vulnerable children grapple with daily and of how a model of care that prioritizes fostering a sense of family can help them.

I left with the reminder that the warmth of home and family—for me, the overwhelming nostalgia of which is triggered by something as simple as a single word—is something that every orphaned and vulnerable child should get to experience.