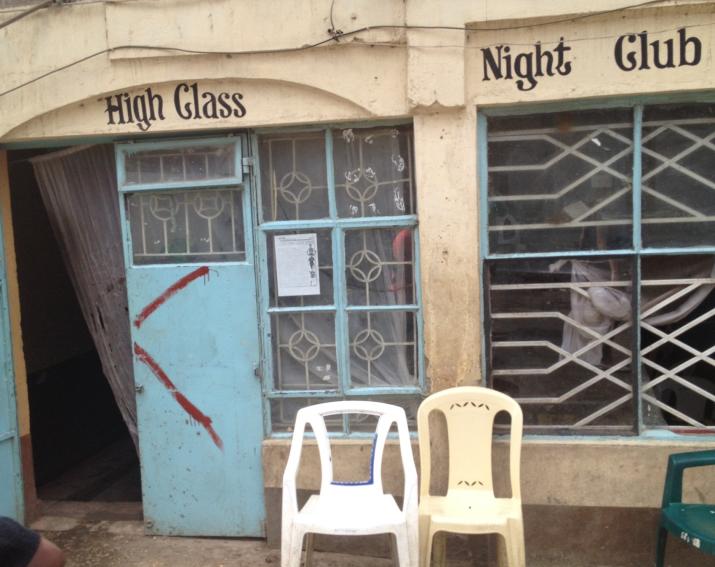 A brothel we visited in Mlolongo

Twenty kilometers Southeast of Nairobi, there’s a small town called Mlolongo. It is a key truck point for long distance truck drivers on the East African route from Monbasa or Tanzania to Rwanda and Uganda. All of the trucks entering Nairobi must stop here and be weighed and pay accordingly. That is how the town got its name, meaning “queuing,” because of the high number of trucks (2,400/night) waiting or parked along the highway at night. Being away from home for long time, earning a low income, isolation and driving long hours all contribute to truck drivers being involved in the sex trade, which is why Mlolongo is also known for its lively night and sex work. There are 18,000 residents, among whom 1,200 are sex workers. They pay 300 shillings (~3 USD) a day to rent a room in the brothel and they earn 500 shillings (~5 USD) each round from their clients, most of whom are truck drivers.

Prostitution is a main cause of HIV infection. In Mlolongo, HIV prevalence is 12%, compared to the average of 7.4% in Kenya. And 12% is believed to be an underestimate. A lot of sex workers don’t want to go to the clinic and be tested because of the stigma. Prostitution in Kenya is illegal, and a lot of sex workers live double lives. They struggle against poverty under the cover of darkness and gaudy eyeshadow. But they also want to be respected as human beings, mothers and spouses.

Wherever there is a problem, there is also an opportunity, an opportunity to save lives and create impact. Several blocks away from the brothels, we saw a big sign that reads “Roadside Wellness Centre.” That is where North Star Alliance’s “Blue Box” is located. North Star Alliance operates a network of converted shipping container clinics placed along Africa’s transport corridors. These containers are painted blue, which is why people call them “Blue Boxes.” North Star brings healthcare to hard-to-reach people like truck drivers and sex workers. North Star’s staff reaches out to the community, makes friends with sex workers and provides free health education sessions, free condoms and health services. Truck drivers and sex workers have the priority to be seen first if they go to the “Blue Box,” where they can have access to not only high-quality healthcare, but also respect and dignity.

Another staff member told me that he moved to Mlolongo after he started to work for North Star. He said, “You need to to be part of the community so they will trust you, not as a doctor, but as a friend.”

During our visit to one of the “hot spots" in Mlolongo, we had a short conversation with a sex worker. She said that she was very happy with North Star’s services, and whenever there was a new sex worker joining them, she told her about North Star. Sometimes she also brought her clients to North Star’s clinic if they had health problems. Last year, North Star’s Mlolongo clinic provided more than 31,000 healthcare sessions.

I’m touched by the “magical” power of these small blue boxes, by the amount of hope and respect created. Often times when we talk about Millennium Development Goals in the class, we don’t necessarily realize that we are talking about these hard-to-reach people—those who live remotely, in poverty, always on the go or undercover. They may not be counted in our numbers, but they certainly need to be reached in order to achieve our goals. We need public sectors and social entrepreneurs, but we also need large corporations to take the lead in their social responsibilities.

North Star Alliance grew out of the partnership between TNT and the United Nations World Food Programme (WFP). While the primary focus of the partnership was hunger, the issue of health and mobility came to their attention. Thus TNT had committed itself to responsibly address the negative impact of AIDS-related diseases within the transport sector.  With the amount of expertise and capacity they have, it is not hard to understand why North Star Alliance was able to scale up and achieve big impact. And this is a great example that large corporations certainly can and should play a big role in global health and development. We hope to see more TNTs and North Stars in our future landscape.