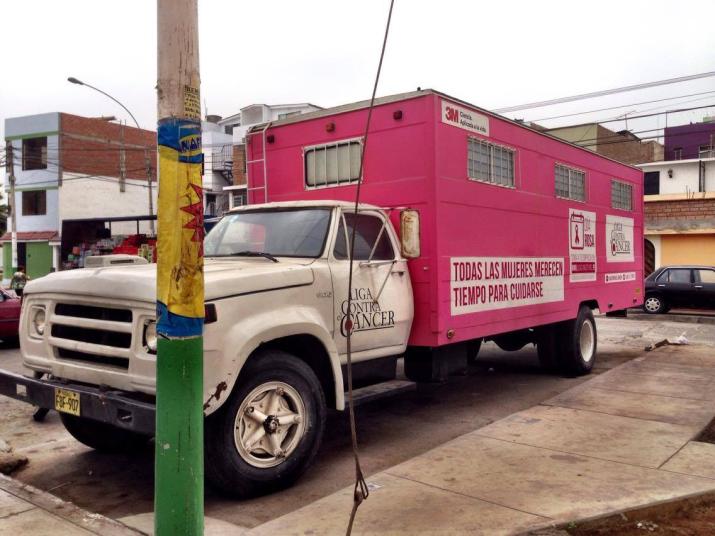 Saturday is a work day here in Peru, so there was no sleeping in to start the weekend. I was up early to take a taxi into one of the poorer parts of Lima, the Callao district.

I met Yenny there, and together we sought out the mobile clinic where we were going to work. Once we had found the correct street in the municipality of La Perla, it was not difficult to spot the mobile clinic. La Liga’s mobile clinics are bright pink, large trucks. There was more color on the truck than the surrounding landscape.

La Liga Contra el Cancer uses mobile clinics to increase access to women’s healthcare in the lower-income areas of Lima. The truck parks itself for a week at a time in different parts of a district, and women can come to the clinic between 9am and 2pm to undergo screening for HPV, cervical cancer, and breast cancer. The services were provided for free!

By bringing the clinic to the people’s doorsteps, La Liga looked to increase the number of women screened for these diseases. Screening rates are ostensibly very low, even though early detection of breast or cervical cancer could offer significant health benefits.

The mobile clinic was small, but the space was well-utilized. It was an example of efficiency; a small reception area and the procedure room were the essence of the clinic. There were just two working staff in the truck; both midwives. While comprehensive, services offered at the mobile clinic were limited by the lack of a physician on site.

But hopefully services will change with the eventual introduction of the POCkeT colposcope and other such innovations. Midwives are already trained to insert speculums, and it would be reasonable to train them to use our portable colposcope. Colposcopy, now only adminsitered in hospitals, could be delivered to these neighborhoods, and the images could be remotely diagnosed by gynecologists. Access to women’s healthcare could be further enhanced.

Again, the importance of midwives in the healthcare system is undervalued. It is only through the dedicated work of the midwives that La Liga is able to operate multiple mobile clinics, each staffed by just two midwives who work six days a week. Midwives have already made strides to increase access to healthcare in Lima, but by equipping them with devices like the POCkeT colposcope they can be more empowered to change lives.