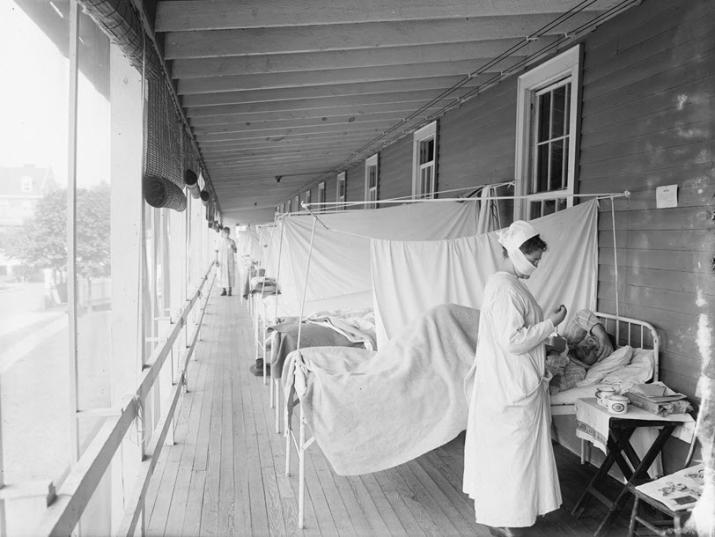 A scene from the flu ward at Walter Reed Hospital, Washington, D.C., during the great Influenza Pandemic of 1918-1919. Photo by Harris & Ewing via Library of Congress website.

In the last few months of 1918, a flu began spreading that would spark one of the deadliest pandemics in history, infecting about one-third of the world’s population and killing around 50 million people. It was a nasty virus that emerged at a nasty time; with many countries engaged in World War I, the flu spread quickly through troops living in close quarters and hopped national boundaries. A century later, we understand much more about diagnosing and controlling the flu, but most global health experts say our interconnected communities present the same danger for the right kind of virus. So if, or when, that virus emerges, will we be ready?

We checked in with a few infectious disease experts at the Duke Global Health Institute to get their thoughts on how we can best prevent and—if it comes to pass—contain this looming outbreak.

Sherryl Broverman, an associate professor of biology and global health, is an award-winning science educator, civic leader and entrepreneur. Her specialty is science communication and science literacy with a focus on infectious diseases.

Gregory Gray, a professor of medicine, global health, and environmental health, leads the Duke One Health team and manages laboratory teams at Duke University, Duke-NUS Medical School, and Duke Kunshan University. He has conducted epidemiological studies of infectious diseases for 25 years on five continents. Much of his work has involved identifying risk factors for occupational diseases, particularly for infectious diseases.

Gayani Tillekeratne, an assistant professor of medicine and global health, conducts clinical and epidemiological studies on respiratory tract infections, antimicrobial resistance and the use of diagnostics for improving antimicrobial use. She conducts much of her research in Sri Lanka.

DGHI: In what ways are we prepared for another pandemic? What are the latest tools and strategies that will help us contain a pandemic?

Gregory Gray: While we’re not fully prepared, we’re more prepared than ever before. The U.S. National Institute of Allergy and Infectious Diseases and the Bill & Melinda Gates Foundation are sponsoring major efforts to develop new vaccines that would be effective against many influenza A and B viruses. These “universal” vaccines have long been a goal of influenza research, but now—with our better understanding of human immunology—we’re making promising advances in vaccine design.

Influenza virus diagnostics are also getting better. At both Duke University and Duke Kunshan University, our Duke One Health team is engaged in testing a novel DNA chip diagnostic platform that might one day decrease the time needed to characterize a novel influenza virus from weeks to hours.

In addition, improvements are being made in viral therapies with a new oral influenza medicine, baloxavir marboxil (Xofluza®), which was recently approved by the U.S. Food and Drug Administration. The Duke Human Vaccine Institute is also developing targeted therapies against influenza viruses.

Sherryl Broverman: One of the most critical components of preventing pandemic flu is surveillance. If we can find virulent flu strains as they emerge, and before they become widespread geographically, we’re more likely to be able to reduce transmission and have time to develop appropriate vaccines.

However, a key aspect of surveillance is being able to recognize which strains are likely to become pandemic. Over the last decade, researchers have asked, “What would the most virulent flu look like genetically?” and then tried to create it in the lab, with the goal of identifying all the mutations that lead to highly transmissible, virulent flu so we can recognize similar strains in the wild.

The flip side of this research is that scientists have created a blueprint for a possible bioweapon. The scientific community decided the concern over pandemic flu outweighed other possible uses of this information.

Gayani Tillekeratne: Managing a pandemic requires accurately identifying the cause of the pandemic, implementing preventive and control actions and disseminating information to the public. And all of these actions have to be completed very rapidly!

In terms of diagnosis, the WHO runs the Global Influenza Surveillance and Response System (GISRS), which connects a network of close to 150 National Influenza Centres that perform surveillance for influenza. Some of these sites have reference laboratories that test influenza viruses. Through this mechanism, emerging influenza viruses that could potentially cause the next pandemic could be identified earlier.

In terms of preventive and control actions, the WHO’s Pandemic Influenza Preparedness (PIP) Framework lays out some mechanisms for ramping up the production of influenza vaccines for a potential pandemic strain and for equitable access to vaccines for the countries most in need (often lower-income countries). The WHO also has a stockpile of the traditional antiviral drugs that get used for influenza.

Social media platforms as well as online news sources can help quickly disseminate information to the public. However, we need to be aware of the risk of the potential spread of misinformation, which could lead to unnecessary panic.

DGHI: What are the barriers to containing a pandemic?

The Duke One Health team is conducting surveillance for influenza viruses among live pigs and live poultry with our partners in various countries in Asia. We’re finding considerable evidence that viruses are prevalent in these animals and that new viruses are likely to emerge from the mixing of viruses in these animals. We have partnered with environmental scientists and are using novel air sampling techniques to detect virus particles in air near animal environments.

Broverman: There are tremendous ethical challenges regarding access to resources during any flu epidemic. Only a limited amount of vaccines are made each year, not enough for everyone in the U.S. and certainly not enough globally. In “regular” flu years, we prioritize vaccination for the young, the elderly and those with respiratory problems. However, during a pandemic, the allocation of vaccines would likely switch to prioritizing people from 18 to 50 years old and those in professions that are essential to societal functioning.

Another challenge for vaccine development has been access to emergent flu strains. Many influenzas that come from southeast Asia have to be shared with companies in the U.S. and Europe for vaccine development. But unfortunately, often the countries that share flu strains cannot afford to purchase the vaccine developed from those strains. This scenario has raised critical issues of viral influenza strains as nationally-owned intellectual property and prompted the global health community to consider policies that recognize the rights of low-income countries to the health products developed from strains emerging in their populations.

Tillekeratne: In the increasingly interconnected world we live in, people and their associated pathogens can spread very rapidly across the world. We saw this scenario play out with epidemics like SARS and Ebola. Consequently, a pandemic may be more difficult to contain.

DGHI: In addition to what we already have in our toolbox, what will it take for us to be prepared?

Newer and more effective antivirals for influenza are also a pressing need. Unlike antibiotics that work quite effectively against bacteria that are susceptible to them, antivirals for influenza have questionable effectiveness, even when a virus is known to be susceptible. Antivirals currently in use have some benefit when taken within the initial 48 hours of illness, but drugs with greater efficacy are needed to reduce the large burden of morbidity and mortality associated with influenza.

DGHI: What are we doing at DGHI/Duke to advance these efforts?

Gray: DGHI graduate, undergraduate and medical students have been and will continue to work in influenza research. For instance, DGHI sent student research teams to Sarawak, Malaysia, during the past two summers, where they found evidence for influenza A viruses in people, pigs and poultry, as well as at animal slaughterhouses. We’re continuing to study some of these specimens.

Our One Health research team at Duke Kunshan University in China is studying live poultry markets for influenza A viruses, and plans are underway for two medical students to conduct surveillance for novel influenza viruses in Vietnam’s poultry and pigs next fall. In the past year, our team has published a number of research papers regarding influenza.

Given the infrastructure in place for our studies, we were also able to help with an outbreak of respiratory infection that occurred earlier this year. The outbreak was centered in the southeastern area of the country and was associated with pediatric deaths, which is unusual for Sri Lanka. We helped with surveillance and on-site diagnosis of the outbreak, which was ultimately identified as being caused by a combination of adenovirus, influenza and respiratory syncytial virus. We are diligently working on equipping our collaborative laboratory space at the University of Ruhuna in Galle with improved diagnostic capacity and are hoping to eventually place a sequencer on-site so that emerging infectious threats may be detected more rapidly.