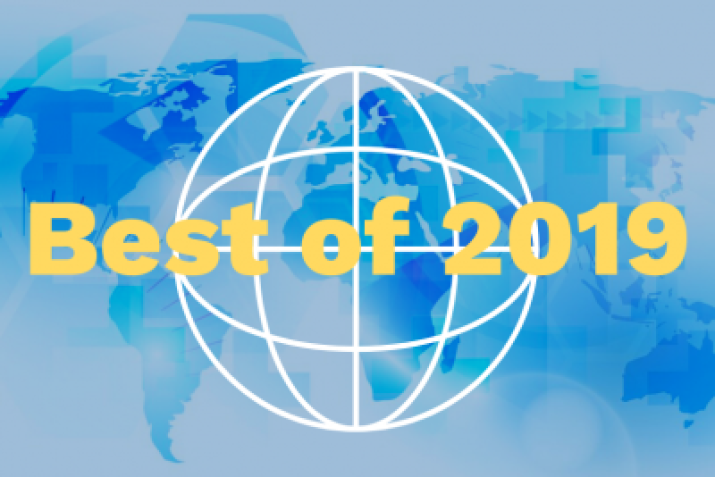 In our somewhat-biased opinion, global health stories have remarkable staying power. They’re important, sure—but the most memorable ones often involve high stakes, ingenious interventions and inspiring outcomes. So, as we close the book on 2019, we’ve taken a fresh look at some of the stories about DGHI faculty, staff, students and partners that stuck with us. In no particular order, here are a dozen that feel just as satisfying the second (or third or fourth) time around.

“WE HAVE A SOLUTION FOR IT”

In Uganda, babies born with gastroschisis, a rare birth defect where a newborn’s intestines are on the outside the body, are often seen as hopeless cases. But an international team of surgeons and trainees, led by DGHI assistant professor Tamara Fitzgerald, has been working to change that. Told through the journey of Nathaniel, one of the first Ugandan babies to be successfully treated for gastroschisis, this story reminds us of the great things that happen when people with passion and drive refuse to accept the status quo.

PREVENTING MALARIA IN THE AMAZON JUST GOT EASIER

Wait, you can predict a malaria outbreak from space? How cool is that? In March, we reported on a new analytical tool being tested in Peru that uses satellite data to identify potential malaria hotspots up to 12 weeks before an outbreak occurs. Developed in part by the DGHI team of William Pan, associate professor of global environmental health, and funded by NASA, the first-of-its-kind tool could usher in a new generation of data-mining satellite diagnostics, giving public health officials critical lead time to deploy resources.

While AIDS-related deaths are declining for almost every demographic, adolescents are the confounding exception. When DGHI associate professor Dorothy Dow began working with adolescent HIV patients in Tanzania in 2011, she began to understand why. Many were struggling with mental health issues that complicate their ability to access and adhere to HIV treatment. With reporting and video from Moshi, Tanzania, this story explores how Dow and her colleagues are trying to reverse the trend through peer-led mental health support.

STUDENTS DESIGN APP TO MINE BIG DATA ON REPRODUCTIVE HEALTH

As part of the Bass Connections project, “Big Data for Reproductive Health,” a group of Duke students set out to design tools that would make it easier to analyze data on contraceptive use. What they ended up creating is an online open-source app that could help health researchers and officials everywhere study global trends in reproductive health and tailor family planning services to how women are using contraceptives.

This story-and-video package follows students in DGHI professor Gavin Yamey’s week-long global health policy course in Geneva, Switzerland. Part of the Sanford School’s Geneva policy program, the course is an immersive dive into the inner workings of health policy, taught in the city where so much of it is debated and formed. Yamey arranges a luminary cast of guest speakers and visits to the top global health actors. Watch this and you’ll understand why Yamey beams that the networking opportunities for students in the program are “off the charts.”

WHEN A SCARF MEETS A BIKE

Anna Tupetz, a physical therapist and 2019 graduate of the M.S. in Global Health program, drew our attention to a gruesome accident that can befall young women in Bangladesh when their long scarves become entangled in the gears of a motorized rickshaw. Dozens of women have suffered serious spinal cord injuries after such incidents, but the risk is still not widely understood and the injuries are frequently misdiagnosed. Tupetz’s field research is helping raise awareness of the injury and what Bangladesh’s frontline trauma units can do to respond in such cases.

What’s the role of a global health institute in its own community? That question has been central as DGHI re-examines its partnerships and activities in the Durham community. While DGHI has always had local research and outreach projects, this story explores the institute’s new commitment to apply global health locally—and what exactly a global health perspective can do to help address health disparities in our own community.

In this blog, global health and neuroscience student Sam Sadler writes an insightful follow-up to a summer 2018 project in Mulago National Referral Hospital in Kampala, Uganda, where she and a Duke Bass Connections team installed hand sanitizer pumps near patient beds to prevent the spread of infection. When she returned this summer, the pumps were gone, forcing her team to revisit their plans. It’s a compelling example of how a solution on paper doesn’t necessarily translate to a solution in practice.

Hearing loss may not garner a lot of attention as a global health issue. But as this story about DGHI assistant professor Susan Emmett’s research on global hearing loss illustrates, we should definitely be hearing more about it. Of the half-billion people worldwide affected by hearing loss, 80 percent live in low- and middle-income countries, where diagnosis and treatment may be inaccessible or nonexistent. Emmett’s work in rural Alaska offers one way to address those gaps through telemedicine.

We caught up with David Boyd, one of DGHI’s most popular professors, as he was finishing a major overhaul of his Coursera course, “The Challenges of Global Health,” which has been taken by more than 21,000 students worldwide. In this interview, Boyd reflects on what he’s learned teaching a course that’s truly global in reach—he’s had strangers approach him in foreign countries and tell him they’re part of his class—and why the new version has a long list of DGHI special guests.

THE MANY FACES OF VACCINE HESITANCY

Too often the issue of vaccine hesitancy—the umbrella term for the growing number of parents who delay or decline recommended vaccinations for their children—is oversimplified; anti-vaxxers, as they’re called, are caricatured as uninformed or political zealots. In this story, we sought out insights from researchers who have worked in communities with low vaccination rates, both in the United States and elsewhere. What they describe is not a singular anti-vax movement, but of a complex web of concerns and reasons that defy simple explanation—or simple remedies.

One of the common frustrations in global health is to see patients suffer and die from conditions that could be treated. It’s especially tragic when those patients are children. Kristin Schroeder, an assistant professor of pediatrics and global health, has been making real headway on that gap at Bugando Medical Centre in Mwanza, Tanzania, where she is trying a number of innovative approaches to help kids and families stay on course with cancer treatments. This is one of those stories that stays with readers, both for how much families in Tanzania have to overcome in order to stay in treatment, and for how far Schroeder is willing to go to help them.