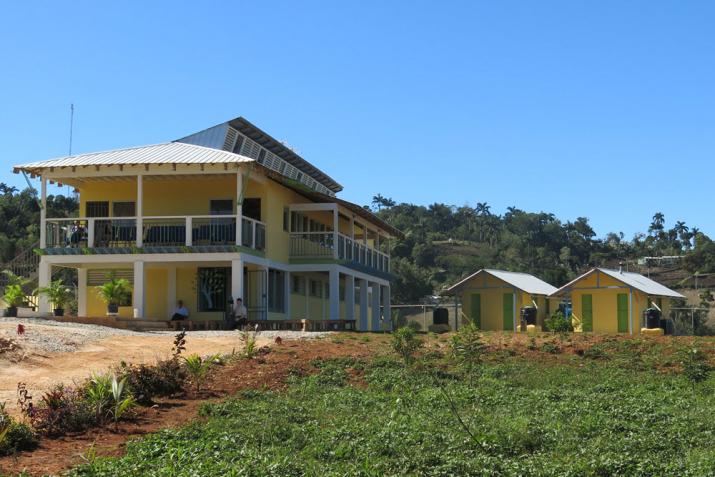 To call David Walmer modest would be an understatement. The Duke associate professor of global health who works as a reproductive endocrinologist is fond of saying, “I am completely unqualified to be doing anything that we’re doing here (in Haiti).”

But what Walmer has built—together with his indefatigable wife, Kathy Walmer, an adjunct professor at Duke—is nothing short of remarkable.

The Walmers founded the Durham, North Carolina-based Family Health Ministries (FHM), a non-profit that provides a broad range of health care services in several communities in Haiti and conducts women’s health research. Kathy is FHM’s executive director and David is the board chair.

FHM is Duke Global Health Institute’s (DGHI's) primary partner in Haiti. FHM has mentored numerous undergraduate, Master of Science in Global Health and medical students who conduct research at its sites throughout Haiti over the course of its 10-year partnership with DGHI.

On February 20, the Walmers and more than 100 people celebrated the dedication of FHM’s new 4,000-square foot Carmelle Voltaire Women’s Health Center—four years in the making—in Fondwa, Haiti. Many people from the local community attended the dedication, including some who had labored on the project, as well as others from United States churches who supported the effort.

Members of the nearby St. Antoine Catholic Church Children’s Choir, dressed in their freshly-pressed Sunday best, performed at the event and Father Joseph Phillipe of Fondwa gave the blessing. Emmanuel Lambert, mayor of the nearby city of Leogane, and Delson Merisier, Ministry of Health representative, cut the ribbon, marking the official opening of the Women’s Health Center.

The Women’s Health Center has four exam rooms, two birthing suites, a large, open education and training space and guestrooms that can accommodate eight visitors. There is additional space for the baby nursery, a pharmacy, midwives office, reception and administrative space, and five bathrooms.

Much of the medical equipment at the Center came courtesy of Duke’s Global Health PLUS program which makes surplus equipment available free of charge to Duke faculty members working on projects in low-resource settings.

The pastel yellow, two-story Women’s Health Center sits in the Haitian countryside, 45 minutes up a steep, winding road from the coast atop a small rise that has 360-degree views of mountains, lush valleys and neighboring farms. Just outside the fence surrounding the compound, children play, two dogs chase each other and a bull tethered to a stake in the ground drowsily munches on grass.

One of the Walmers’ primary goals is to staff the clinic with Haitians. They have contracted with a local physician who will provide oversight, and they’re in the process of hiring nurses and other staff. “Having a local staff will bring a level of care that has never been present in the community,” said Kathy Walmer. “Visiting volunteer American medical teams will supplement the care provided, but having a Haitian staff will offer important continuity of care.”

At Last, a Safe Place for Women to Give Birth

In rural parts of Haiti, most women give birth in their homes because they don’t have access to a health care facility and because that is how it has been done for centuries. In some cases a birth attendant with rudimentary training assists the woman, but often the woman delivers her baby with only the assistance of family members. These local practices and infrastructure realities are among the factors contributing to Haiti’s exceedingly high infant and maternal mortality rates.

“Women give birth at home because, at least in this area, there hasn’t been a place to go,” said David Walmer. “Now there is.”

The Walmers hope to use the large, airy education space to augment the training of traditional birth attendants and educate women about the importance of prenatal care in an effort to encourage some of them to deliver their babies at the Women’s Health Center. Local women will also be counseled about the importance of breastfeeding and how to plan their pregnancies.

The Force that Was Carmelle Voltaire

David Walmer first met Carmelle Voltaire, the Women’s Health Center’s namesake, in 1986. Kathy met her in 2000 when she first began working Haiti after sending the youngest of their five children to kindergarten.

“Carmelle was the kind of person who always made you feel at home,” said Kathy. “She saw herself first and foremost as a caregiver.” Carmelle Voltaire received her nursing training in Trinidad and returned to her native Haiti to serve.

Carmelle and a fellow nun began their order in rural Fondwa in the 1990s. The order eventually grew to a dozen sisters serving the area. According to Kathy, Carmelle’s focus was the well-being of the children in the community. She checked on them at the local school and the area home for at-risk children, most of whom were taken in because their families did not have the means to care for them. Carmelle nursed more than one child back to health after they were rescued from severe malnutrition at the children’s home, including the Walmers daughter whom they adopted in 2001.

“When Carmelle was dying of cancer, she said ‘my work here is not done,’” said Kathy. “We named the Women’s Center after her so that the work she started in the community will live on. It would have been a dream for Carmelle to witness improved health care for women and to see the safe place we have created for women to congregate and encourage each other.”

Carmelle Voltaire died from complications of liver cancer at the age of 49 in March 2012.

The Charlottesville, Virginia-based Building Goodness Foundation (BGF) is a non-profit that connects skilled volunteers from the design and construction industries with vulnerable communities at home and abroad. BGF was an integral partner to FHM in the construction of the Women’s Health Center.

John Little, a carpenter from Ellensburg, Washington, with a white buzz cut, is a BGF volunteer. He worked on a construction crew that built the roof of the Women’s Health Center and attended the Center’s dedication ceremony. “I have been a carpenter since I was seventeen,” said Little. “But it wasn’t until I came to Haiti that I knew why God made me a carpenter.”