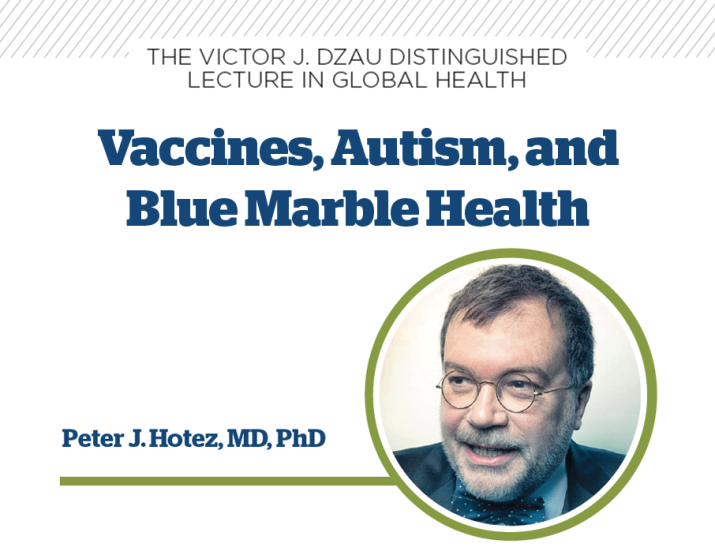 Peter Hotez, dean of the National School of Tropical Medicine at the Baylor College of Medicine and an internationally recognized expert on neglected tropical diseases, will give a talk at the Trent Semans Center for Health Education on February 19 from 4 to 5pm. The event, which is free and open to the public, will be preceded by a brief reception from 3:30 to 4pm.

Register for the Talk

In his talk, “Vaccines, Autism and Blue Marble Health,” Hotez will use vaccines as the “pivot point” to discuss a broad range of issues. With a unique perspective as a scientist, global health advocate and father of a daughter with severe autism, he’ll discuss enormous successes in vaccinating the world’s children and how the anti-science and anti-vaccine movements threaten to erode these global health gains. He’ll talk about neglected tropical diseases and his recently-published book, Blue Marble Health: An Innovative Plan to Fight Diseases of the Poor amid Wealth, and some of the new drivers for 21st Century neglected diseases, including war, conflict and climate change. (Register for the event here.)

This annual lecture is supported by The Victor J. Dzau Global Health Lecture Fund, established by Dzau in 2017 as part of the Bill & Melinda Gates Foundation Global Health Matching Grant.

We recently had an opportunity to talk with Hotez about his work as a researcher and vaccine advocate. Here’s what we learned.

DGHI: Tell us about your work at Baylor College of Medicine and the Texas Children’s Hospital.

HOTEZ: About seven years ago, I helped establish the National School of Tropical Medicine at the Baylor College of Medicine to develop novel interventions for poverty-related neglected diseases, sometimes called “neglected tropical diseases” or “NTDs.”

We’re developing a portfolio of about a half a dozen vaccines for diseases such as Chagas disease, leishmaniasis, schistosomiasis, hookworm and coronavirus infections. We’re also developing new diagnostics and conducting a lot of active disease surveillance. We’ve found widespread diseases of poverty wherever poor people live across the world—including places like Texas and the Gulf Coast.

And in the last decade or so, we’ve gotten involved in trying to shape public policy around these diseases. For example, I helped create the framework for NTDs (see 2005 and 2006 articles) and design a package of medicines that’s now been delivered to over a billion people in the world. I’m also now doing a lot of public outreach around NTDs, both in poor countries and in the United States.

And now, I’m moving into vaccine policy, because the lack of vaccines for these diseases really stems from a policy failure. We have the science and technology to develop these vaccines, but we don’t have the geopolitical underpinning and financial instruments we need to advance these vaccines all the way to licensure.

DGHI: What drew you to this type of work?

HOTEZ: Ever since I was a kid, I had a fascination with microbes and maps, so I think that tropical diseases were the confluence of the two. I studied biochemistry in college at Yale, and then while I was in the MD/PhD program at Rockefeller University and Weil Cornell Medical College, I started working on developing a vaccine for human hookworm infection.

DGHI: Tell us about neglected tropical diseases—what makes them neglected? And how did they get that way?

HOTEZ: The concept of NTDs came out of the Millenium Development Goals in 2000. The sixth goal, to combat HIV/AIDS, malaria and other diseases, was established to address the plight of people living in extreme poverty. There was a massive outpouring of international support for AIDS and malaria, through PEPFAR, the Global Fund and other organizations, but no one was willing to take on the other diseases—which are actually the most common diseases among people living in poverty. That’s why they’re called “neglected tropical diseases.” So scientists like me had to take on new roles in public engagement to promote action.

It’s particularly interesting how difficult it’s been to get attention for these diseases in places like the U.S. After having so much success raising awareness about NTDs in Africa and Asia, I thought that when we found widespread neglected diseases of the poor in the U.S., things would really take off. Quite the opposite has happened.

DGHI: You published a book, Blue Marble Health: An Innovative Plan to Fight Diseases of the Poor amid Wealth, in 2016. What is “blue marble health”?

HOTEZ: The concept of "blue marble health" is that the overwhelming majority of people who have poverty-related neglected diseases live in G20 countries. People say, why would a poverty-related disease be an issue in a G20 country? Well, it’s the poor living among the wealthy that account now for most of these diseases—they’re sometimes called “the poorest of the rich.”

The book describes, country by country, the hidden burden of neglected diseases among the poor in the G20 countries, including a chapter on the U.S.

DGHI: How did you come up with the name “blue marble health”?

HOTEZ: Historically, when we talk about neglected diseases of poverty, there’s been an assumption that these diseases occur primarily in developing countries. Now we know that’s not the case. All economies are rising, but they’re leaving behind the bottom segment of society, and those are the ones who are suffering most from these diseases.

The term “global health” often implies a focus on low- and middle-income countries, so I wanted to give this concept a different name that would explicitly reflect a broader perspective. I called it “blue marble health” referring to the fact that when the Apollo astronauts took that first picture of the earth, they pointed out how it looks like a big blue marble.

DGHI: What’s the most important takeaway from your book?

HOTEZ: If we could get the G20 leaders to pay attention to their own vulnerable neglected populations, we could melt away two-thirds of the world’s NTDs. That’s why we’re developing vaccines for these diseases and trying to get this issue on the G20 agenda.

DGHI: What prompted you to get involved—very publicly—as a strong advocate against the anti-vaccine movement?

HOTEZ: Because nobody else was speaking out. The anti-vaccine movement started in the U.K. with a fraudulent paper published in the Lancet in 1998. The paper led to vaccine coverage being dropped across the U.K., in parts of Europe and in California—which led to measles outbreaks in those areas. The movement has now shifted from the U.K. to Austin, Texas, and we’ve had an aggressive 20-fold rise in children not being vaccinated in Texas, where I’m based. Given my profession and my experience as an “autism dad,” it would have been difficult not to get involved. I provide the evidence base refuting a link between vaccines and autism and also point out why there’s no plausibility of vaccines causing autism, based on what we know about the neurobiology of autism spectrum disorder.

DGHI: You’ve said that the anti-vaccine movement has been catching on in parts of the world beyond the U.S. and Europe. Why do you consider this movement a serious threat to global health?

HOTEZ: I’m very worried about what will happen if and when this movement hits some of the big low- and middle-income countries, like the BRICS countries and nations like Nigeria and Indonesia. This movement could actually lead to a reversal of our global health gains.

DGHI: What actions do you recommend the scientific community and the public take to counter the anti-vaccine movement?

HOTEZ: We have to start thinking about a new role for scientists—to become actively involved in public engagement. When most of us in my generation were being trained as scientists, we were told, “Don’t interact with journalists. Write for each other. Focus on your grants and papers.” Public engagement was not necessarily considered an appropriate activity for scientists.

This mindset, though, is enabling for the anti-science movement. It’s why we have an anti-vaccine movement, it’s why we have climate change denialists and it’s also why we had a flat-line NIH budget for the last two decades. We need to take a more public, more active role, and my talk will call on the scientific community at Duke to get more actively involved in outreach—doing things like engaging in social media, writing blogs and op-ed pieces and testifying in local legislature and in Congress.

Register for the event here.

Peter J. Hotez is dean of the National School of Tropical Medicine at the Baylor College of Medicine. An internationally recognized expert on neglected tropical diseases and the author of two books, he is director of the Texas Children’s Center for Vaccine Development, which is developing new vaccines for diseases affecting hundreds of millions of children and adults worldwide, including hookworm infection, schistosomiasis, and Chagas disease and SARS/MERS. Through his research and public advocacy, he has become recognized as a national thought leader on infectious diseases and vaccines, appearing frequently in media such as BBC, CNN, Fox News, MSNBC, the New York Times and the Washington Post. Later this year, Hotez will publish a new book, Vaccines Did Not Cause Rachel’s Autism, which describes his roles as both a vaccine scientist and autism dad.