Returning to the Camps 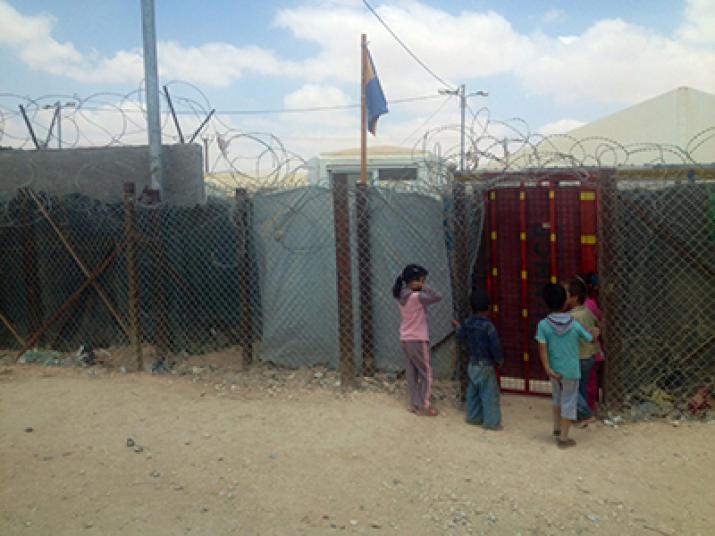 It’s hard to believe I’ve been here two weeks. Amman has a different feel, as Ramadan enters its final days.  Last time I was here in Jordan it was as part of the Kenan Institute for Ethics’ DukeImmerse: Uprooted/Rerouted program, collecting life stories of Syrian and Iraqi refugees. This time I am here to research issues of health and wellbeing among Syrian, Iraqi and Palestinian refugees in Jordan, as part of my senior thesis.

The issues feel more pressing this time.  The war continues to ravage Syria, as it morphs into a three-way conflict between President Bashar’s forces, the Free Syrian army and ISIS. Intense violence has reared its ugly head in Iraq as extremist militants threaten to take over whole swaths of the country.  And the seeds of the Israeli/Palestinian conflict, having been sown over the past sixty-something years, have once again sprouted into a grotesque humanitarian crisis.

Jordan has a long history of hosting refugees; stories of flight and the mark it leaves are found even in the most banal of places here.  Several days ago, when I went to a pastry shop, I stumbled inadvertently upon one of these stories in a Palestinian area of town. The baker, a young, wiry man from Damascus, told me his story of how he paid smugglers $1,000 to get his wife and children into Turkey, a far less exorbitant price than the 6,000 euros to get them to Italy or Germany.

But perhaps beyond the stories themselves, one of the most striking things I have encountered is the pain of permanence. Once woman I recently met, Leila, has been very involved with humanitarian assistance in the Palestinian “camps,” which now resemble towns rather than camps. Palestinians from the 1948 war were granted Jordanian citizenship when they came to Jordan, so they are not technically refugees; however this does not lessen the challenges they face. Leila begins the conversation by telling me about her own family’s flight from Palestine during the ‘48 war, when she was only seven years old.  Her family left Palestine, briefly stayed in Jordan and Syria, before moving to Lebanon.  When she married, she returned to Jordan and has lived in Amman ever since, which is how she became involved with assistance in the camp areas (where she herself does not live).  When I ask her why some of the Palestinians chose to live in these areas, where issues of poverty, family violence and high school dropouts are commonplace, she gives an answer I never saw coming.  “Because of hope.  In these pre-fab houses, which are not permanent houses, there is hope of one day returning home to Palestine. But if they chose to leave the camps and move into a house outside of the camp, it’s like they’re giving up on that dream.”

I also visited Zaatari refugee camp, the sprawling refugee camp hosting over one hundred thousand Syrian refugees. The Syrians I spoke to in Zaatari explain that in some senses, conditions have improved: there are new medical clinics, improved security and a bustling market within the center, nicknamed “Champs Elysees.”  Perhaps one of the biggest improvements has been the replacement of tents with caravans, yet this very transition of tents to caravans is a subtle reminder to the Syrians that they are here to stay. The idea of returning home seems more and more…impossible.  “Maybe we can return in 5 or 10 years, just maybe,” one Syrian family tells me. The note is somber. Some aid workers I spoke to explained that this phenomenon is eerily similar to the arrival of Palestinians from the ‘48 war. In the original Palestinian camps, refugees’ houses transitioned from tents to caravans to pre-fab.  Is the Syrians’ transition from tents to caravans a sign of their reluctant, impending permanence in Jordan? It certainly seems so.

This was originally posted on the Kenan Institute for Ethics blog.