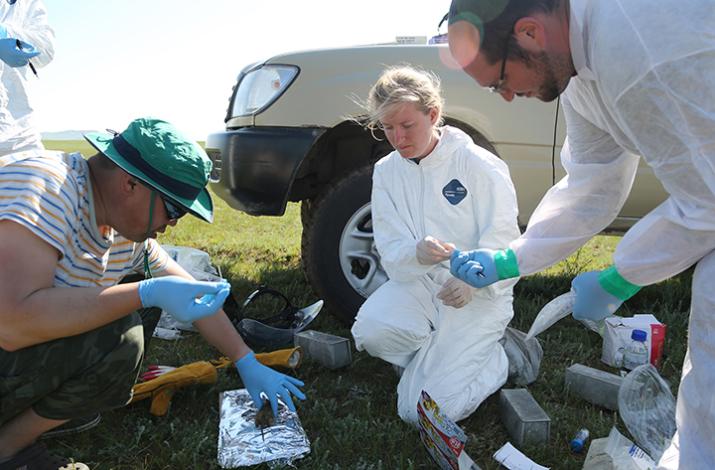 The fortified Toyota Land Cruiser slipped and bounced in the muddy hollows of the rain-drenched Mongolian steppe. The driver, a native Mongolian man named Inka, slowly engineered the vehicle along what just two days earlier was a dusty pair of dirt tracks.

In the back seat, Master of Science in Global Health students Laura Pulscher and Thomas Moore braced themselves during the ride, relaxing when Inka stopped the vehicle to ask a goat herder for directions.

It’s a commonly uttered phrase for visitors and natives alike. A meager 10 percent of Mongolia’s road network is paved. The vast majority of travel in this storied land of Genghis Khan is done on dirt trails and grassy paths.

“If you had asked me before beginning the global health master’s program that I’d be coming to Mongolia, I would have laughed,” Moore would say later at a campsite on the edge of a livestock pasture.

But when Moore and Pulscher were given an opportunity to conduct their field research projects in Mongolia, they barely blinked before saying yes.

“It’s one thing to learn something in a classroom setting,” Pulscher said, “but another to actually apply it to your field of study in a developing nation. I don’t think it ever crossed my mind that I’d end up in Mongolia.”

Pulscher collected blood and serum samples from the animals’ tails and took small ear biopsies. Moore’s work was far more tedious—combing the oft-matted fur of the rodents in search of ticks.

Their individual projects differed, but the students’ goals were the same: to detect in rodents’ blood and ticks the presence of dangerous pathogens—Borrelia (Lyme disease), Rickettsia (spotted fever), and anaplasma (blood disease seen mostly in livestock but can cause mild fever in humans)—and share lab results with local health officials and veterinarians who could take preventive measures, such as educating herders and their families about ways to protect themselves and their livestock.

In Mongolia, animals have near royalty status. It is a nation of just three million people and more than 50 million horses, camels, sheep, goats and yaks, which are serious players in the economic cycle, and critical for the more than one million herder families who feed off their livestock and make a living selling animals for meat, hides or wool.

“Observing these diseases as they circulate throughout wildlife and livestock has a tremendous impact on the health and welfare of humans here,” Moore said.

Holed up for two days in the dome tent she shared with Sola as an atypical summer downpour drenched the steppe, Pulscher was confident the rain would subside and the rodent trapping continue.

By afternoon the sun reappeared and the drying-out process commenced. The quest for rodents resumed about a half-hour from camp on a tract of land where a herd of horses grazed nearby. Small, rectangular, aluminum traps were set. When the researchers returned early that evening, the sound of scratching was heard coming from within several of them.

The veterinarian Khatnaa cradled a Mongolian gerbil taken from one of the traps. Pulscher—with Khatnaa’s guidance—injected it with the mild sedative. It was Khatnaa, with his well-spoken English, who had baptized the students to rodent testing in the field. He taught them how to safely handle the animals, determine the correct dose of sedative, clip the tail and ear so as not to cause lasting injury and collect the blood and tick samples.

After four gerbils were tested and gear repacked inside the Land Cruiser, Moore considered the importance that the team of Mongolian vets played in the success of his and Pulscher’s respective projects.

“They are a tremendous help to us,” Moore said. “They not only teach us different tricks of the trade to catch rodents here, but they act as interpreters when we meet a herder family and provide us with local knowledge of the different species of animals.”

This partnership between Mongolian vets and Duke Global Health students was forged by Gregory Gray, professor of global health and infectious diseases, who established a research relationship with Mongolia nearly 10 years ago.

Gray, who also holds an appointment in the Nicholas School of the Environment, is a passionate disciple of the One Health concept of health care that champions the conviction that human health is intimately tied to veterinary and environmental health.

Grey, Moore and Pulscher were part of a roughly 10-member Duke contingent that participated in the 5th Annual International Symposium on One Health in Ulaanbaatar prior to the students’ embarking on their three-week fieldwork. Pulscher and Moore were presenters at an infectious disease workshop. It’s rare, they said, for master’s students to have the opportunity to present at an international symposium.

“It was a tremendous opportunity to collaborate with international leaders and share our upcoming research,” Moore said.

The Institute of Veterinary Medicine in Ulaanbaatar houses multiple labs with Mongolian scientists exploring various aspects of zoonotic diseases—those that might some day jump from animals to humans. This was home base for Moore and Pulscher for the bulk of their three-month Mongolian stay. It was here that the blood and tick samples they collected in the field were analyzed for signs of the dangerous pathogens.

The students extracted DNA from the samples using magnetic beads inside small test tubes. Because DNA has a charge, it’s attracted to the beads, which are then separated from the rest of the sample and the DNA extracted.

Performing field and lab work is usually an either/or proposition for students interested in global health. Rarely do master’s students have the opportunity to do both.

“It’s unique that we’re able to collect our own specimens in the environment and bring them back and test them,” Moore said. “This takes our education to the next level.”

“It makes us more well-rounded individuals,” Pulscher added. “A lot of people don’t necessarily have both lab and field skills.”

They worked in the lab with Myagaa, who accompanied them on their fieldwork. His own project involved collecting mosquitoes and testing them for West Nile virus.

Learning about his work, and watching the other Mongolian vets in the field lasso livestock and take blood samples, was an unexpected, welcomed educational component, they said.

The fresh yogurt was great, the dried, fermented milk curds and mare’s milk not so much, the students concluded. But that is the way one gets to know the culture of a people—through their food. The hospitality of the Mongolian herder families is a memory that won’t soon fade, they said.

“It’s amazing how welcoming they were to let us into their homes, feed us, let us get to know them and let us camp on their land,” Pulscher said.

On a cool summer night in one of those camps as he watched the sun slowly set over a verdant hillside, lighting the horizon in an indigo purple haze, Moore reflected on the allure of the landscape surrounding him.

“This place is beautiful,” he said. “Being here has been such a privilege.”

This article was originally published in the Fall 2016 edition of DukeMed Alumni News magazine.