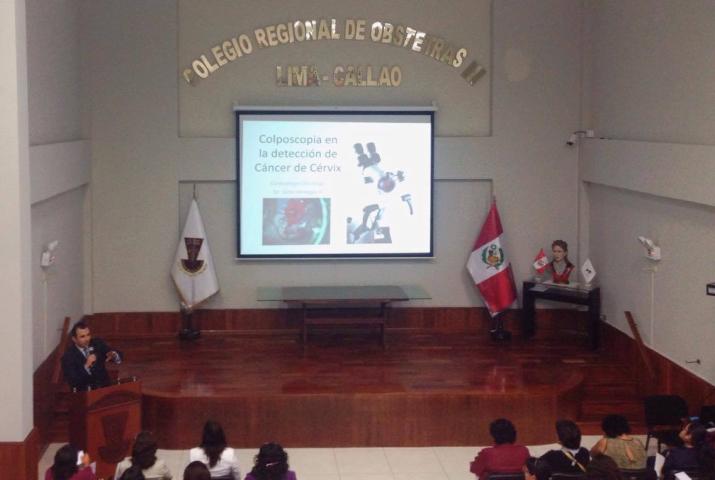 After a week in Lima, I have identified the sound that I will forever associate with this city.

I hear the car alarms go off at least five times every day, and I am flabbergasted as to why. They are not being triggered by people trying to break into cars or anything of the sort—the fine young mornings are simply inexplicably pierced by these sounds that that screech for minutes before being silenced.

Early speculation on my part is that perhaps the alarms here are set to lower activation thresholds to deter mischief. But I shall continue to investigate and shall keep everyone posted.

The first week here has primarily been spent getting to know our collaborators better. Dr. Venegas and Yenny have been incredibly welcoming and hospitable, and I am excited to work with them for the coming two months. It amazes me how much they get done every day at the clinic here. The pace at the clinic is much faster than what I experienced during the weeks that I spent observing the cervical procedures at Duke Hospital. Dr. Venegas sees a patient every 20 minutes for 4 hours straight, and Yenny handles the administrative and patient-care duties of three nurses on her own—the norm for a midwife here, I learn.

Naturally, I was grateful and touched that Dr. Venegas took Raina and I on a walk-around of the clinic immediately after he had completed procedures for the day. I was reminded of the passion and energy that one needs to possess to work in healthcare.

Upon walking into the auditorium, what first struck me was the sheer number of people present. Every seat in the auditorium was filled. At first I thought this was simply a testament to Dr. Venegas’ reputation as a gynecologist. He spoke first of HPV and the powerful difference that can be made through vaccination, and then of colposcopy and modes of identification of pre-cancerous lesions on the cervix.

My Spanish was not nearly up to speed with what was being spoken, and I was concentrating on figuring out as much of the lecture as I could. Even so, I was in awe of the ardent attention with which everyone in the room was listening. It was a Wednesday evening, 6pm, but more than a hundred midwives were voluntarily listening to this lecture—furiously taking notes and occasionally posing questions and clarifications. And the same intensity was maintained until the end of the three-hour session. I did not see a single head nod, or a moment of disinterest or fatigue.

I think it is fair to say that I was moved by the dedication that these people were showing to doing their best to learn more about a pathology so that they could help their fellow citizens. Sometimes we make light of it, but the responsibility borne by healthcare workers is immense, and the passions exhibited by this roomful of people was, to me, inspirational. These are the people who work with the least recognition and for little praise, but without whom healthcare systems would crumble. Here is a salute to the impassioned hearts of the nurses and midwives who are the bedrock of the healthcare workforce.