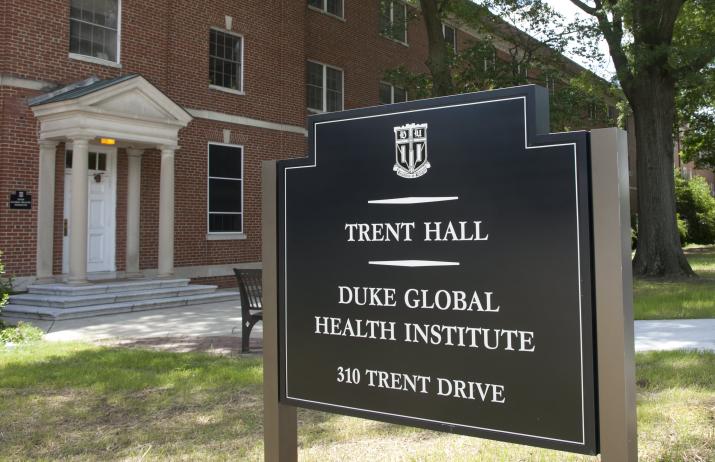 Jafar serves on a number of scientific journal editorial boards and on international advisory panel of Public Library of Science. She also advises the government and other agencies on policies related to chronic disease.

Jafar is also a professor of Health Services & Systems Research at the Duke-NUS Medical School in Singapore.

As Duke’s pediatric general surgery division chief, Rice oversees the division’s clinical, teaching and research missions. Over the past several years, he has developed an increasing interest in global surgery, particularly on clinical and research questions that challenge the practice of pediatric surgery in resource-constrained environments. Rice leads the Duke-Guatemala Pediatric Surgery/Urology Project, an ongoing clinical, educational and research collaboration with the Moore Pediatric Surgery Center in Guatemala. Prior to his recent secondary faculty appointment at DGHI, Rice was a DGHI affiliate faculty member.

Schmitt participates in the Duke-Kilimanjaro Christian Medical Center (KCMC) Women’s Health Collaboration as a teaching physician within the department of obstetrics and gynecology. He is also a consultant at the Cervical Cancer Screening Clinic at KCMC in Tanzania.

As director of Duke’s division of benign gynecology, Schmitt supervises and coordinates gynecologic services for the underserved of Durham and the surrounding area. He also directs the Cervical Cancer Prevention Clinic at Duke, where they see patients from across North Carolina. Passionate about cervical cancer prevention, Schmitt conducts research and lectures on HPV biology and cervical cancer prevention in North Carolina and other parts of the world.

As a pediatric nurse practitioner, Jane Blood-Siegfried’s areas of interest and research include immune response, vaccines, sudden infant death syndrome (SIDS) and health maintenance. In addition to her affiliate faculty appointment with DGHI, Blood-Siegfried is a professor in the Duke School of Nursing and a lecturer at the University for Developmental Studies in Tamale, Ghana, where she’s involved in a distance educational project.

As the director of Global Educational Partnerships and Innovation at the School of Nursing, Blood-Siegfried arranges global clinical experiences for graduate students. She is currently working on a project to start a family nurse practitioner program at Kilimanjaro Christian Medical Center in Moshi, Tanzania.

Margaret Humphreys
Professor of the History of Medicine, School of Medicine

Margaret Humphreys’ research interests include the history of American medicine and public health, history of tropical medicine, history of medicine in the American Civil War and history of racial disparities in health and health care in the United States, and infectious disease in the U.S. and the American South.

Her research has appeared in a wide range of academic journals, and she has published several books, including her most recent, Marrow of Tragedy: The Health Crisis of the American Civil War. Humphreys was editor in chief of the Journal of the History of Medicine and Allied Sciences from 1999 to 2012.

Humphreys, a professor in the Duke School of Medicine, is the president of the American Association for the History of Medicine. She also serves on the advisory board of the Triangle Center for Evolutionary Medicine.

Brad Taicher, a pediatric anesthesiologist and assistant professor of anesthesiology and pediatrics and chair of the Anesthesia Patient Safety and Quality Committee, is interested in the quality and safety of anesthesia in resource‐constrained environments. He and his colleagues at Duke and partner institutions have evaluated the limitations of using post‐operative pain scoring systems developed in the United States and studied cultural differences in perceptions of anesthesia care and barriers to implementation of WHO standards in resource‐constrained environments.

Vincent, a professor in the Nicholas School of the Environment, is the author of several books and many articles in environmental economics, economic development, forestry and general science journals. He consults regularly for the World Bank and other international organizations and has directed or worked on projects in more than a dozen countries.