The Silent Killers: Uncovering the Truth Behind Fever 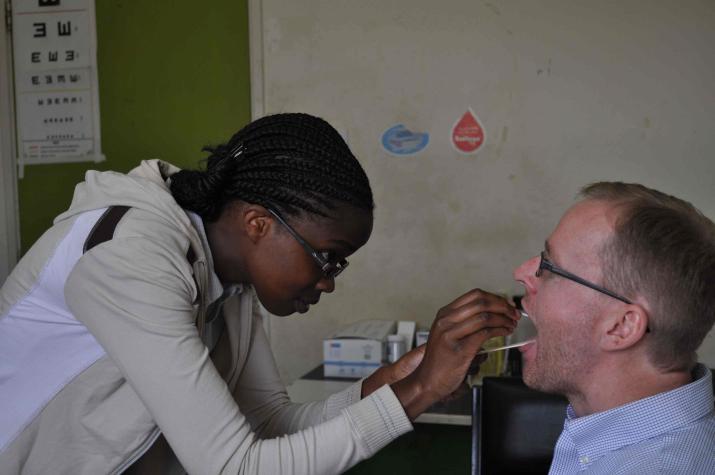 Fever is one of the most common symptoms among people seeking medical care in sub-Saharan Africa, yet health care providers often lack the tools and knowledge to diagnose it. While health providers and drug retailers continue to diagnose and treat most patients with a fever for malaria, Duke researchers are urging caution.

Building on years of groundbreaking fever research across multiple countries, a growing group of Duke faculty and trainees, many of whom work with DGHI faculty member John Crump, have determined that fever is often misdiagnosed, and therefore the true causes go untreated. In collaboration with international partners, their research draws attention to the growing importance of bacterial infections, arboviruses and zoonoses which are causing fever and claiming lives. taken collectively, these discoveries are helping to inform how care is delivered in these low-resource settings.

The answer is not malaria

Duke researchers John Bartlett, John Crump, Thomas Holland, Wendy O’Meara, Truls Ostbye, Elizabeth Reddy and Chris Woods are making new discoveries about what causes fever in Africa and Sri Lanka, while also building the capacity of local health care providers to improve care. In Tanzania, Duke is working with hospital clinicians at the Kilimanjaro Christian Medical Centre (KCMC) to ensure patients receive the appropriate treatment for their illness. Previously, a study of 500 children hospitalized for fever had revealed that 62 percent were treated for malaria, yet only two percent tested positive for it.

“Malaria over-diagnosis is a major problem in many low- and middle-income countries, and patients who receive antimalarial drugs have worse health outcomes if they don’t actually have malaria,” said Crump, who worked on the study with Reddy and partners from KCMC. “With more knowledge and better diagnostic testing, we believe this growing line of Duke research could lead to better care for patients with fever in the developing world.”

Common but often overlooked causes of fever include invasive bacterial infections such as typhoid fever, HIV-associated conditions like cryptococcal disease and tuberculosis, animal-related infections like leptospirosis, as well as arboviruses like dengue and chikungunya. In fact, a review of studies across a dozen countries concluded that bacterial infections rival malaria as a common cause of fever, illness and death. bacterial or fungal bloodstream infections were identified in 13 percent of patients with fever and seven percent of patients overall.

This research has laid the foundation for a number of other studies that further investigate the prevalence of typhoid fever,  HIV co-infections, and more recently, bacterial zoonotic diseases. Research by duke infectious diseases Fellow and former global health resident Holly Biggs found that leptospirosis was a common but unrecognized cause of fever among adults and children, but was often misdiagnosed as malaria or pneumonia. Transmitted by animals, this zoonotic disease is common among livestock farmers and agricultural workers.

Diseases from animals are common

Zoonotic diseases are common in rural Tanzania, where many people live in close proximity to livestock. In the northern part of the country, zoonotic pathogens account for 11 times more fever cases than malaria. But, little is known about how these pathogens are transmitted from animals to humans, or the social, economic and behavioral factors associated with human disease risk in pastoral settings. Crump is leading a groundbreaking study of the impact and social ecology of bacterial zoonoses in Africa, where communities depend on livestock for food security and income.

In Northern Tanzania, pathogens from animals cause 11 times more fever cases than malaria.

The $1.74 million four-year project funded by the National Institutes of Health Fogarty International Center and the National Science Foundation uses hospital records, household surveys, human-animal epidemiological studies and other resources to track three bacterial zoonoses in three agricultural communities of Tanzania. The three most common zoonoses are leptospirosis, Q fever and brucellosis, which are responsible for a substantial burden of disease among humans and livestock. the innovative surveillance project brings together experts in human infectious diseases, veterinary infectious diseases, environmental health, disease modeling, and social sciences, with collaborators from Duke and KCMC, the University of Glasgow and Sokoine University of Agriculture in Tanzania.

“Diagnostic tests for zoonotic diseases are often unavailable in low-resource areas, which increases the likelihood of patient misdiagnosis, improper treatments, health complications and even death,” said Crump. “This new research is important because it highlights major neglected diseases and begins to develop the knowledge base needed to inform prevention strategies, such as the role of animal vaccination.”

Causes of fever in children

Duke’s growing portfolio of research on emerging infectious diseases in a global context provides the perfect backdrop for O’Meara, a DGHI faculty member and epidemiologist based in Eldoret, Kenya, who also studies fever with an emphasis on increasing accurate diagnosis and treatment for malaria in health centers and dispensaries.

“Our work was definitely inspired by John Crump’s study,” said O’Meara, “but his work focuses on hospitalized patients, and we wanted to look at children in the outpatient setting.”

O’Meara is concerned about the number of children with fever being treated with antimalarials from local dispensaries or drug retail shops, but who don’t have malaria. at a typical rural health center in Kenya, roughly 70 percent of people with fever who test negative for malaria still receive antimalarial drugs.

“This puts the patient at risk because they are not being treated for the real cause of fever,” said O’Meara. “It also puts future patients at risk because it can accelerate the spread of drug resistance, making these antimalarials ineffective.”

O’Meara and Holland, a former global health fellow now in the Duke Department of Medicine, along with global environmental health expert William Pan, are trying to understand how non-malarial pathogens like strep throat and respiratory viruses contribute to fever among children admitted to the Webuye District Hospital.

If not properly treated, strep throat can cause rheumatic fever, and eventually death from rheumatic heart disease. With start-up funding from DGHI, O’Meara and her team were able to help the Webuye District Hospital set up a small pediatric laboratory where they have successfully diagnosed children with rheumatic fever. Duke’s research on the causes of fever is on the leading edge of addressing emerging infections in the developing world. The hope is that these important discoveries will shed light on the silent killers that are plaguing so many people throughout the world.