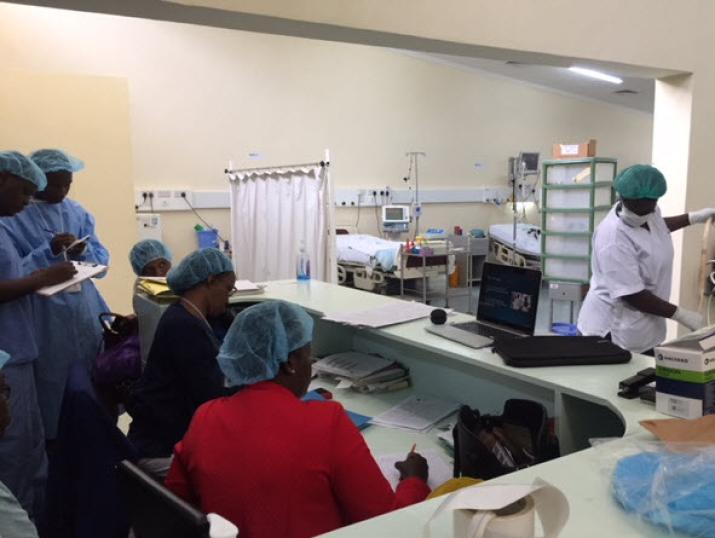 The intensive care unit at the Moi Teaching & Referral Hospital in Eldoret, Kenya.

The mortality rate in the Intensive Care Unit at the Moi Teaching and Referral Hospital in Eldoret, Kenya, hovers around 54 percent, on par with similar hospitals in resource-limited settings globally, a recent study found. But while challenges in the intensive care unit certainly contribute to mortality, study authors believe that what happens before patients arrive in the unit may have just as much, if not more, impact on patient outcomes.

The study, led by Hussain Lalani, a resident physician at UT Southwestern Medical Center and former Doris Duke International Clinical Research fellow at the Duke Global Health Institute (DGHI), was the first to investigate factors associated with critical care outcomes and mortality at a public hospital in Kenya. It was particularly timely given a recent initiative by the Kenyan Ministry of Health to expand critical care capacity throughout the country, and it highlights the high cost of receiving intensive care.

The researchers—including Wangari Waweru-Siika, then the head of the Moi Teaching and Referral Hospital (MTRH) intensive care unit (ICU) and Protus Kituyi, chair of the Department of Anesthesia at Moi University School of Medicine—also evaluated the validity of the Mortality Probability Admission Model II0 for their patient population. They determined that this prediction model, targeted for use because of its simplicity in estimating mortality without requiring laboratory results, does not provide sufficiently accurate information to support care decisions at MTRH.

Peter Kussin, professor of medicine, DGHI affiliate and co-principal investigator, notes that the ICU at MTRH has a lot going for it, including relatively modern medical equipment, strong hospital leadership and experienced nurses and physicians capable of performing advanced therapies. However, the staff is stretched thin, essential interventions aren’t consistently available and a shortage of ICU beds keep some critically ill patients on the wards for far too long, leading to irreversible clinical deterioration. The hospital houses less than one ICU bed per 100 hospital beds, compared with an average of nine ICU beds per 100 hospital beds in the United States.

There’s strong support—even an expectation—among Kenyans to increase ICU bed capacity, but Kussin says their research confirms that increasing capacity  would provide only a partial solution to the  problems leading to  poor critical care outcomes in Kenya. While it’s important to expand ICU resources, it’s also crucial to examine and address the challenges in the pre-ICU setting that contribute to high mortality among ICU patients.

Kussin points to inadequate emergency transport from outlying hospitals as well as delays in administering antibiotics and other critical interventions. For example, he says, it’s common for patients to be asked to purchase medical supplies needed for a surgery, such as a rod to fix a leg fracture, before carrying out the surgery. Most families need time to raise money to buy supplies, and by the time they receive the procedure, many have a worse long-term prognosis because of the delay.

A lack of formalized triage protocols within a hospital also contributes to high ICU mortality. At MTRH, like many other public hospitals in Sub-Saharan Africa, admissions to the ICU generally reflect a “first come, first served” approach, resulting in a high proportion of patients with poor chances for survival. “Often, people are admitted to the ICU very late in their illness, and by most evidence-based criteria, they will not benefit from ICU care,” says Kussin. “They end up languishing in the ICU, and the unfortunate result is that others who would benefit from critical care don’t have access to it.”

Kussin is quick to note, though, that hospital leadership and global health researchers must take cultural factors into account when thinking about developing triage and patient management protocols that could result in better ICU outcomes. Cultural issues surrounding discussing death, as well as strong religious beliefs among the majority of Kenyans, make it challenging for physicians and other healthcare staff to have conversations with patients and their families about life support and end-of-life care generally.

“I’ve never used the words ‘dying’ or ‘death’ in a conversation with a Kenyan patient or their family members, and that’s very intentional,” says Kussin, who works with partners at Moi Teaching and Referral Hospital for about four months a year. “As one of my Kenyan colleagues said, in their culture, ‘When you mention death, you bring death.’”

And like most African countries, Kenya doesn’t have a brain death statute, so defining death in clear terms can be tricky.

To address these challenges, the authors—including DGHI’s Joseph Egger and Larry Park—advocate for developing and implementing standardized triage and treatment protocols and strengthening diagnostic capabilities. They argue that mortality prediction models can play a central role in supporting these efforts, but to be effective, the models must take local hospital and health system factors into account. While these steps won’t solve all the problems associated with high ICU mortality, they’d be a great start.

“We know how to effectively treat sepsis and stroke—two of the three major admission diagnoses we found to be strongly associated with ICU mortality—and we can make an immediate impact by working with our colleagues to standardize and expedite the delivery of life-saving interventions,” says Lalani. “Ultimately, strengthening the overall health care system has the potential to reduce morbidity and mortality for everyone, not just ICU patients. That will take time.”

Read the study and accompanying editorial.

This study was supported by the Doris Duke Charitable Foundation through a grant supporting the Doris Duke International Clinical Research Fellows Program at Duke University, as well as contributions made by Hubert Yeargan Center for Global Health. Study collaborators include the Academic Model Providing Access to Healthcare (AMPATH), a partnership between Moi University, Moi Teaching and Referral Hospital and a consortium of North American universities.