Stuck in the Mud

Brittney Wittenbrink, a 2016 graduate of our Master of Science in Global Health program, began service as a Peace Corps Response Volunteer. 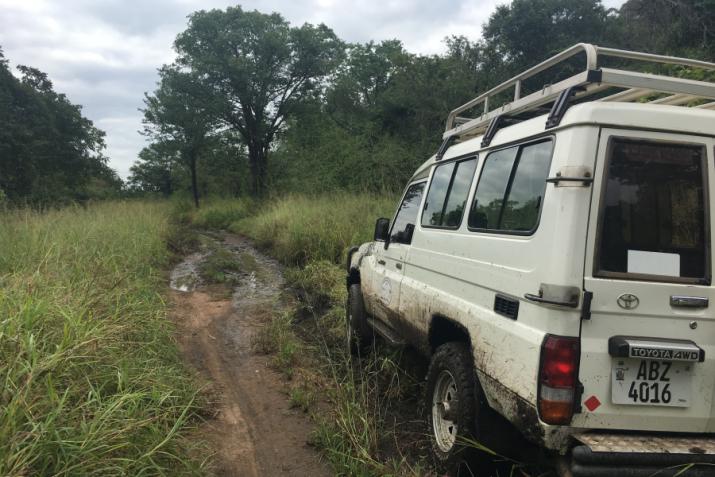 Brittney Wittenbrink, a 2016 graduate of our Master of Science in Global Health program, began service as a Peace Corps Response Volunteer. She’s working as a Maternal Health Implementer for Saving Mothers, Giving Life (SMGL) with the goal of reducing maternal and newborn mortality in Petauke, Zambia. Brittney is keeping a blog—BrittWitt Abroad—to chronicle her experiences, and from time to time, we’ll be featuring posts from her blog. Here’s her latest post (from June 30):

I like to think that you haven’t truly done fieldwork until your land-cruiser is stuck in impossibly deep mud for hours in the middle of an isolated, rural area. Well, I have done true fieldwork.

In my office (and most public health realms), when we say “the field” we are referring to the rural areas where we work; “fieldwork” means we are leaving the office and traveling to work on projects in-person instead of managing them from our desks. Because my district stretches hundreds of kilometers, loosely connected by a string of dilapidated dirt roads, our fieldwork is not always smooth. My coworkers have all been stuck the field for long periods of time, even overnight occasionally. Sometimes heavy rains will flood a bridge and leave it impassable until the water recedes. Sometimes the water will destroy a poorly-constructed bridge all together and an alternate route must be found. Other times the vehicle breaks down or gets stuck in the mud in the middle of nowhere. I had somehow made it months without getting stuck in the field—I was the district lucky charm.

Then quarterly data collection, or "Extreme Data Collection," rolled around again and I wasn’t so lucky. On our trek to visit over half the facilities in the district, at the end of rainy season, it finally happened—my luck ran out. Over the week and a half of day-long data collection, I spent many hours sitting in a car that was devastatingly swallowed by mud.

This bridge collapsed in an intense overnight rainstorm.

The first time our team got stuck it all started because of a partially collapsed bridge. The bridge had a gaping hole so huge that our land-cruiser couldn’t fit across; our driver tried—much to our horror—but the car would have plummeted off the side if we drove a few more inches. I had reached this bridge on a separate fieldwork trip the previous week and knew an alternate route we could take to get to the facility. Unfortunately, some of the men from the nearby village wandered up and spun a tale about a car before us that had simply detoured through the watery field that the bridge led over. They convinced our driver we could make it too, despite my pleas to just take the alternate route. So, we attempted to drive through the field. We didn’t make it. Not even close. 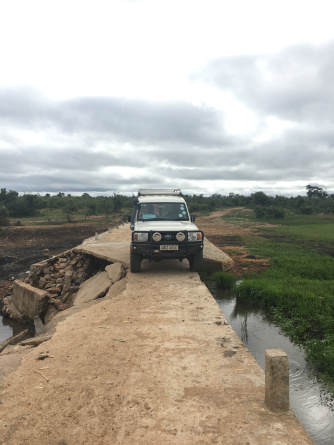 The driver was convinced the land-cruiser would fit…I was NOT.

About half way through the swampy field, the water and mud overwhelmed our vehicle and we slid to a halt as the tires spun uselessly. The 15 men that had convinced us we could make it all rushed over to help. They collected sticks and rocks and shoved them under the vehicle to help the tires find some purchase; they pushed us out an inch at a time. Our driver got out to help them, while the women stayed in the car and waited. Normally, I’m all about challenging gender roles…but in this case I was cool with it. “Girls don’t help push cars out of mud?! Ya sure ok, sounds right…” Honestly, I wouldn’t be much good trudging through a foot of watery mud in my business shoes and pencil skirt anyway. 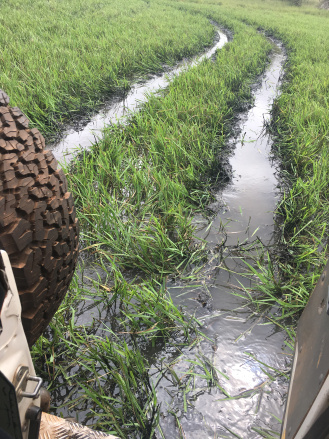 View from the back of the land-cruiser.

It took about an hour and a half but we eventually made it back to dry land. I was thankful that the men stayed to help after leading us astray, but in our boredom Idah and Maureen (my coworkers) and I quickly concocted a conspiracy theory that they tried to get us stuck on purpose so we’d pay them to help us get out. We did give them some kwatcha for their trouble so who knows. Honestly, I don’t think they did it on purpose…but if they did it’s a pretty good play, I’ll give them that. I’m just happy they were able to get us out eventually because for a while it seemed pretty hopeless. I claimed a seat in the car to sleep on that night and everything! 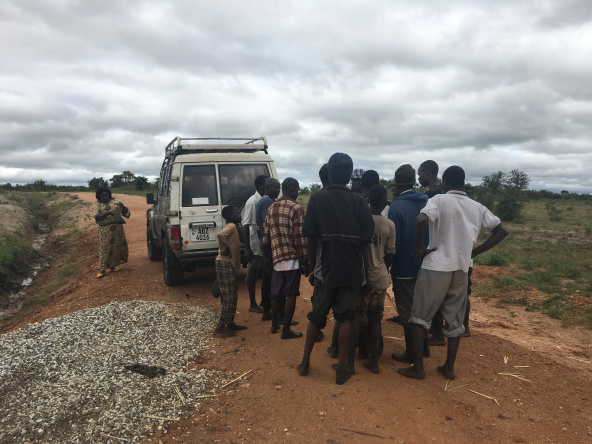 Our rescue brigade after freeing us. 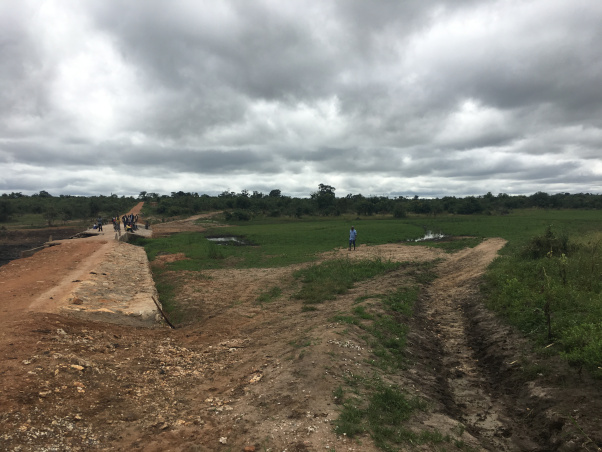 The collapsed bridge (left) and the swampy field that we attempted to detour through (right).

Two days later, on our journey to a health facility 4 hours away, we got stuck in mud at the 3.5 hour mark. Really stuck. We were in an area so rural that the road was a narrow, muddy path in the middle of the woods. Due to heavy rains, the road became gradually worse the further in we drove. As the driver veered to avoid one mud puddle, we sank into a deceptively deep muddy pit on the side of the road. Luckily two boys from a nearby village passed by and stopped to help us free the car. I got out and helped this time (which is a lot easier if the car isn’t submerged in a flooded field) and collected sticks and rocks for them to shove under the tires. Eventually they headed to their village to collect a few tools so we had to sit and wait. 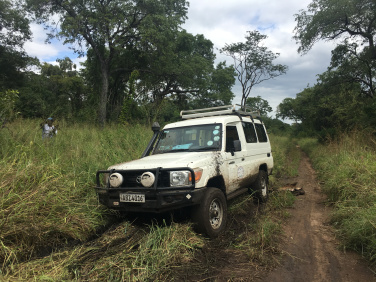 Our truck stuck in the grass.

I was prepared for some downtime this time and brought my laptop and external hard-drive full of movies/tv. While we waited for their return, I had a great time showing Maureen and Idah part of Guardians of the Galaxy. They loved it so much I had to copy it to their flashdrives so they could finish it once they got home! 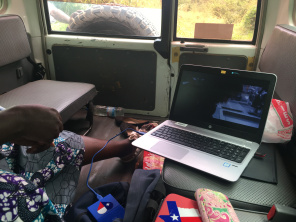 Turns out, watching movies is a great way to spend time stuck in the mud.

When the boys returned with some large wooden planks we were able to get out fairly quickly; we had been stuck a little over an hour. When we were finally out of the mud we drove about 5 minutes and then became stuck in another mud pit. My luck had definitely run out. Thankfully, another few boys came up to help. This time it took an hour and a half to escape. We repeated our routine of collecting materials and then enjoyed a few Brooklyn Nine-Nine episodes while waiting for some planks to arrive. The team gave both sets of boys some kwatcha and a bar of nice soap. After getting stuck the second time we accepted defeat. There were no alternate routes that weren’t also muddy traps and we didn’t want to risk getting stuck a third time. We turned around and headed home. We spent over ten hours in the car that day and didn’t reach the facility. We managed to have some fun watching things on my laptop, but it was still rough and pretty frustrating. 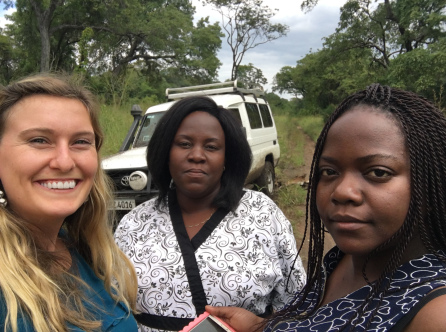 Me, Maureen, and Idah. I missed the obvious memo about not smiling in the “We’ve been stuck here for an hour” selfie.

I’ve gotten briefly stuck a few times since, but nowhere near as bad. I hold my breathe every time the tires slip, hoping a half-day trip doesn’t suddenly extend into the evening.

However, the past few months I’ve felt most stuck at work. I’ve been in-country over 8 months now and things feel a little stagnant. Progress seems to come in waves, with ebbs and flows. At the beginning of my service, things seemed to flow more easily. There was lots to do and work on and I was learning exciting new things each day. However, as the months passed my progress began to stall a bit. I know it’s normal, probably in any job, but I still miss the ease of tackling all the low-hanging fruit and feeling the short-term, tangible successes. Many of my coworkers also left for school (they’re earning more advanced nursing degrees), leaving me alone in the office with no district activities planned and lots of extra time to fill. I tried to use it efficiently—I wrote a grant, I planned and carried out some health education activities in my neighborhood, and I just got back from an exciting workshop. Things just felt slow for a while. Fortunately, it feels like I’m starting to get out of this rut and feel less stuck. A few long-term projects are finally coming to fruition on top of a suddenly crazy travel schedule, so things are picking up. After all, there hasn’t been a mud-pit so far that’s deep enough to keep me down!

(Apologies for that incredibly cheesy final metaphor. Once I thought of it, it had to happen. Thank you for humoring me.)