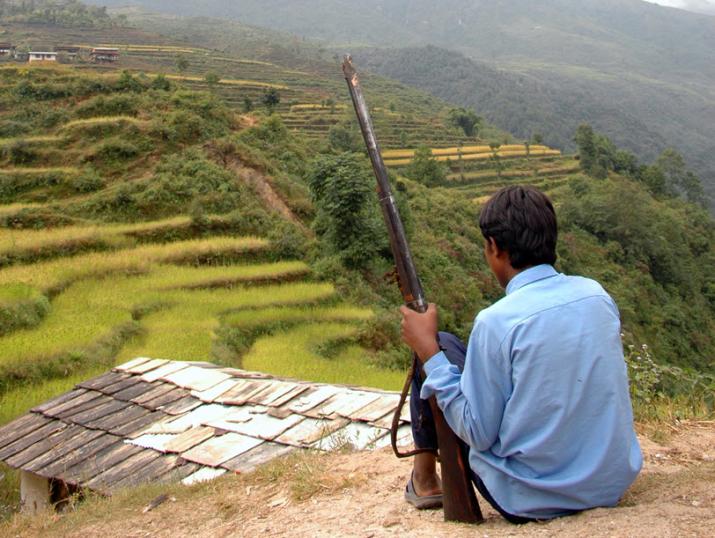 A child soldier with a rifle in Nepal.

In a first-ever study to identify how trauma affects gene expression among child soldiers, assistant global health professor Brandon Kohrt and his colleagues found resilience to be a key factor in determining individual response at the molecular level.

Previous research has shown that chronic exposure to trauma is associated with an increase in pro-inflammatory gene expression and a decrease in antibodies and antiviral responses in immune cells. Those molecular responses have been linked to a wide array of diseases, including cardiovascular and neurodegenerative diseases, cancer, infections and mental illnesses such as anxiety and depression.

Kohrt and his colleagues conducted a five-year longitudinal study of former child soldiers exposed to the trauma of a decade-long civil war in Nepal.

“This study has important implications for responding to young people exposed to war, terrorism and natural disasters,” said Kohrt, who also holds appointments in psychiatry and cultural anthropology.

The children in the study—154 former soldiers and 136 youth who experienced the war as civilians—were evaluated using the Child PTSD (post-traumatic stress disorder) Symptom Scale and a Resilience Scale, both of which were adapted for use in Nepal. Blood samples were also taken to examine the corresponding genetic response (CTRA, or conserved transcriptional response to adversity).

“We now have clues to how the body and mind can be protected against the effects of PTSD,” said Kohrt. “Interventions to promote resilience can be delivered more easily than specialized PTSD treatments in post-conflict and post-disaster settings, and our study raises the hope that resilience-focused interventions could change the genetic response to childhood trauma.”

Kohrt and his colleagues are currently applying these new insights in their interventions for youth affected by last year’s devastating earthquakes in Nepal.

This study was supported by the HopeLab Foundation and U.S. National Institutes of Health Grants P30 AG017265 and F31 MH075584.