Zika may be out of the headlines, but researchers are learning more about how the mysterious virus makes its way from mothers to babies. 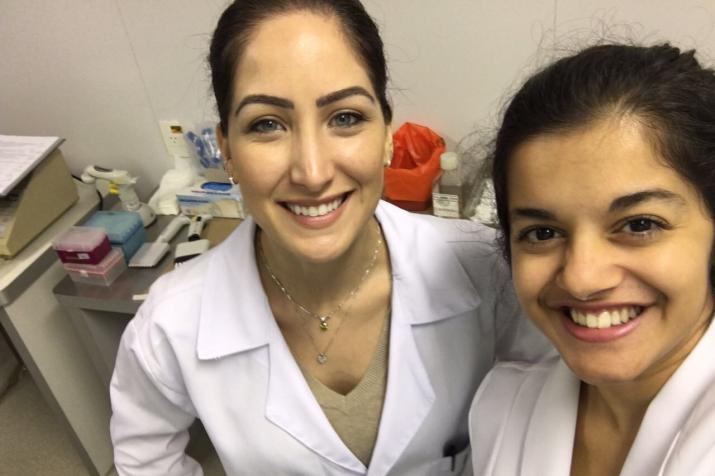 Tulika Singh (r), a doctoral student in the Department of Molecular Genetics and Microbiology at Duke, works in Sallie Permar’s lab. Singh is pictured with Camila Giuberti, a doctoral candidate in the laboratory of Reynaldo Dietze at the Center for Infectious Diseases in the Federal University of Espírito Santo, Brazil.

Remember Zika? Four years ago, headlines about the mosquito-borne virus caused high alarm. The illness was spreading across the Americas and the Caribbean and was being linked to birth defects and neurological disorders. Of deep concern was that babies of some women who had been infected with Zika virus while pregnant were born with smaller than average-sized heads, a condition called microcephaly.

While Zika has all but disappeared from the pages of most U.S. media outlets, the virus is still a threat—and an ongoing mystery for researchers. Among those making progress is Sallie Permar, professor of pediatrics at Duke School of Medicine and a DGHI affiliate faculty member. Permar began working with researchers in Brazil not long after the Zika outbreak first occurred there.

In February 2016, the World Health Organization declared a public health emergency on an international scale. The outbreak was particularly severe in Brazil, where a dramatic increase in cases of microcephaly was reported among newborns. The country had declared its own national health emergency the previous November. In communities at the heart of the epidemic in northeast Brazil, more than 60 percent of the exposed population was infected, according to a recent New England Journal of Medicine review article.

“When the Zika epidemic broke out, those of us in the field of neonatal viral infections were, of course, interested and alarmed about this new congenital infection on the scene,” says Permar, who studies viruses that are transmitted during pregnancy, including HIV and cytomegalovirus (CMV).

The trajectory of the epidemic—primarily spread by the bite of an infected Aedes species of mosquitos—wasn’t clear at the time, says Permar. “My previous work that was very relevant to Zika transmission. We were amongst a number of scientists who jumped on this. We felt like something needed to be done. We weren’t sure how much of a global problem it would become,” she says.

Through DGHI, Permar connected with Reynaldo Deitze and other scientists at the Núcleo de Doenças Infecciosas (NDI) Hospital in Vitória, in Espírito Santo, Brazil. Duke colleagues, in particular medical professor Ralph Corey,  had collaborated around clinical training and research for nearly 20 years with the infectious disease center, which is located in the eastern part of the country, an especially hard hit by Zika.

Permar received pilot funding from DGHI and sought funding for a collaboration with the Duke-NUS Medical School in Singapore, where collaborators had expertise in dengue virus immunity.

“We partnered with some of the Duke NUS scientists who were experts in the field of dengue, including Eng Ong Ooi. Their expertise was very relevant to Zika, and combined nicely with our expertise in maternal immune responses” says Permar.

From there they began identifying women for their study. “Working with the researchers in Brazil, we identified pregnant women—some who had Zika and some who didn’t. And we formed two groups and collected placenta samples,” says Tulika Singh, a doctoral student in the Department of Molecular Genetics and Microbiology at Duke, who works in Permar’s lab.

Singh says the study focused initially on pregnant women who had fever and rashes “because we wanted to understand what Zika looks like in pregnancy and what aspects of maternal immunity are favorable for the infant,” she says.

In 2017, Singh visited NDI in Espírito Santo. “I worked with their laboratory personnel to set up an assay to detect Zika antibodies and met with local investigators,” she says. Working in the NDI lab opened her eyes to the challenges her Brazilian colleagues face in their daily work.

“There were some material difficulties. Just getting supplies shipped over there was challenging. There are plenty of instruments here at Duke, but there we had to be creative. With our pipettes at Duke, we can measure out 12 samples at one time. But there was only one of those pipettes available in the lab in Espirito-Santo— things we take for granted here at Duke,” Singh says.

“Getting nitrogen shipped to keep samples cool involved multiple days on the phone. It took a lot of planning to do any experiments there,” added Singh.

The experience made her realize how important partnerships are. “They may not have the capacity to perform all the desired analysis, and therefore we could get much more done when we worked together. It showed me how I want to continue working as an investigator, working with scientists in other countries move forward,” she says.

“We separate the immune cells into tubes and then freeze them in liquid nitrogen. We have run into issues when shipping things back to our Duke lab, with the companies that monitor the shipments and keep them cold,” Permar explains.

While some samples were lost due to temperature problems during shipping from Brazil to Durham, enough made it to Duke for Permar’s lab to test maternal and infant samples from deliveries for immune responses.

In a healthy pregnancy, Permar explains, maternal antibodies transfer to the fetus, providing “a nice array of antibodies” to the newborn. Through their lab testing, they wanted to see what happened when a mother was infected with Zika.

“We found even with Zika infections, they are still transferring the antibodies to their newborns,” says Permar, whose research on the topic was published in August, in PLOS Neglected Tropical Diseases. The new study points out how maternal immunity might help the infant, and the next step is to find out if the baby has continued immunity.

“Are these maternal Zika-specific antibodies good or bad for the infant? We are wondering if these antibodies from the mother to the child are protective or if they might actually cause risk? We know dengue antibodies can enhance dengue, not just protect against it,” Singh says.

Singh and Permar say they hope this is just the early stages of a long-term relationship with their colleagues in Brazil. There is much more to study, and they’re concerned for the long-term health of mothers and children.

“When we find a committed partner, it’s invaluable. You have to have someone who is deeply committed and that’s what we’ve found with this site, but it also requires funding. And because the epidemic has subsided, we can’t make the case that we can enroll new patients. We didn’t pick up new cases in 2018,” says Permar.

And while Zika infections have calmed down in Brazil and the rest of the Americas — which scientists attribute to a combination of “herd immunity,” household-level mosquito elimination efforts, and broader mosquito control programs — Permar says viruses are tricky devils, and Zika will likely resurface again at some point. A number of Zika virus vaccines are in the works and experts hope an effective one will be available when the time comes.

Singh adds that it’s not only about being prepared for the next epidemic, though. They want to follow up with the mothers and children who are infected, understand how the virus impacts their health over a lifetime. Singh recalls one meaningful interaction she had with a pregnant woman participating in their study. She came for her monthly check-up with her grandmother while Singh was visiting Brazil.

“She was 19-years-old, visibly worried for her baby, and was asking questions about her baby’s health. Without rigorous evidence and licensed diagnostics, we didn’t really have good answers to counsel her, a Zika infected pregnant women. As our collaborator asked questions about her health, the grandmother started passionately describing why she brought her granddaughter into our study in Portuguese. I caught bits and pieces,” says Singh.

Essentially, the older woman brought her granddaughter in because she didn’t want pregnant women in the future to have to worry about their baby in the way that her granddaughter was worrying. She explained that when she was younger, researchers had come to study yellow fever and test vaccines in her community. Now, she said, people don’t have to worry about yellow fever because they have a vaccine for it.

“She is hopeful that her contribution to research today will mean that future generations will have access to life-saving vaccines. So that’s why she believes in research and chose to encourage her granddaughter to participate. Having her tell me that has been one of the most inspiring moments of my training, and motivates me to continue research, in order to serve people and improve health,” Singh says.