World Malaria Day: The Challenges of Treating a Disease without Symptoms 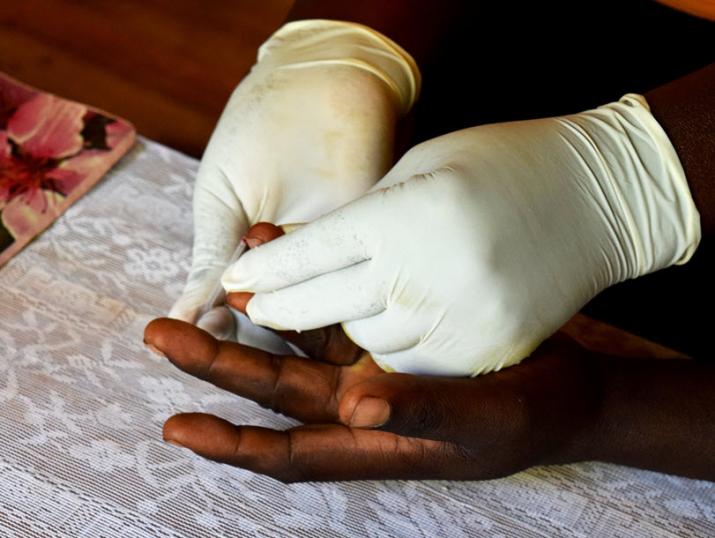 A man is tested for malaria by a community health volunteer in Sinoko, Kenya. Photo by Matt Boyce, MS'17.

Almost every science or biology test I ever took as a primary or secondary school student asked some version of the question, “How is malaria transmitted?” I am pleasantly surprised that all these years later, that very question still constitutes a significant part of my academic life and career.

It didn’t bother me so much when I received zero credit for my omission of the single word infected on one exam question. But it did bother me a little bit to learn that on the same exam, students who stated infected human but failed to specify that the anopheles mosquito was a female were awarded partial credit for a response that I felt was equally imprecise.

I suppose now that my biology teacher at the time was only trying to emphasize that the human’s status as a reservoir for the malaria parasite is of key importance in the transmission cycle. Well, perhaps he would be proud to know that several years since that exam, I am developing an even deeper appreciation of that notion.

Recently, my work as a research assistant at Duke Malaria Collaboratory has led me to think more critically about malaria transmission and the bottlenecks in malaria control and eradication efforts.  A long-standing challenge that is now emerging as a critical area of research in the malaria community is the role of asymptomatic infections in sustaining reservoirs of malaria parasites.

Scientists have known for a long time that within malaria-endemic ecologies, malaria infections commonly present with very mild, or at times, no apparent clinical symptoms. The ability of individuals to carry low-density malaria infections without experiencing overt disease is believed to be the consequence of exposure-related clinical immunity, resulting in the effective suppression of parasites in blood.

Left untreated, these infections can persist within their hosts for long durations and wield the potential for transmission to uninfected individuals who may unfortunately be more susceptible to clinical episodes of malaria elicited by the same parasite.

Clearly, individuals who are not actively experiencing any symptoms of illness or discomfort have no motivation for seeking a diagnosis or any sort of clinical review. Moreover, if they did go to a health center to be tested, it is also likely that their parasite counts would be well below the limit of detection of the rapid diagnostic tests (RDTs) currently in use in most low-resource settings.

Another key concern is the potential contribution of asymptomatic infections to the spread of anti-malarial drug resistance. In areas like Cambodia and Myanmar, where patterns of anti-malarial drug resistance are being closely monitored, drug-resistant parasites have been detected in a few asymptomatic hosts. This has prompted further calls for mass drug administration (MDA) to eliminate all Plasmodium falciparum reservoirs in the Greater Mekong Sub-region.

While mass drug administration programs have proved to be successful as an elimination strategy for a number of neglected tropical diseases in high burden areas, the World Health Organization stresses the need for more research and evaluation of MDA’s applicability in malaria elimination efforts, due to the more challenging intricacies of interrupting malaria transmission.

A more recent and promising approach to addressing the burden of asymptomatic malaria is the use of ultra-sensitive rapid diagnostic tests (uRDT), the first of which was launched and field tested in representative high- and low- transmission areas in Uganda and Myanmar in 2017. The uRDT showed a greater than 10-fold lower limit of detection for the malaria antigen compared with the standard RDT, fueling high hopes for a new tool that may further efforts to unveil and address asymptomatic malaria infections.

In summary, despite recent gains in malaria eradication efforts, there remain significant challenges and limitations that stand in the way of complete global eradication. The promise of a malaria-free world is in reach—but it commands our collective persistence and inventiveness to extinguish the very last parasites.