‘Never Try to Save the People Without Them Participating’

Published January 28, 2022 under Around DGHI 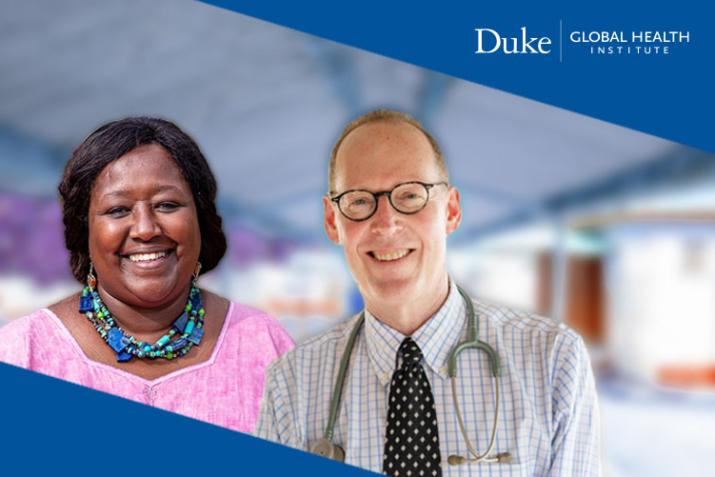 Agnes Binagwaho and Paul Farmer took different routes into medicine. Binagwaho, M.D., Ph.D., trained as a pediatrician, and Farmer, M.D., Ph.D., a medical anthropologist and physician. But when their paths crossed in 2001 at a United Nations meeting on HIV/AIDS, they realized they had a lot in common.

Binagwaho, who at the time was helping to lead HIV prevention efforts in her home country of Rwanda, noticed Farmer in a corner of the meeting room. As they chatted, they realized they shared frustrations with how policymakers and world leaders often sidelined voices from African countries that were most affected by the HIV epidemic.

“As a reality check for the policymakers, [Binagwaho] asked to have the next meeting in Rwanda,” says Farmer, the co-founder and chief strategist of Partners in Health. “I went and when I got there, we became friends very quickly.”

Binagwaho worked for five years as Rwanda’s health minister and now serves as vice chancellor of the University of Global Health Equity, which she and Farmer co-founded. “I knew I wanted to work with her -- and for her,” Farmers says with a small chuckle, “they are the same thing.”

Binagwaho and Farmer reflected on their 20-year partnership to advance global health during DGHI’s 2022 Victor J. Dzau Distinguished Lecture in Global Health, which took place on Jan. 26. Speaking in front of students at the University of Global Health Equity In Butaro, Rwanda, and a virtual audience of nearly 400, the doctors discussed a wide range of topics, including the impact of COVID-19, failures in the global response to the pandemic, and the need for community-driven healthcare decisions and priorities.

Gavin Yamey, M.D., director of the Center for Policy Impact in Global Health and a DGHI professor of the practice of global health and public policy, moderated the conversation from Duke’s campus. The lecture series is supported by a gift from Dzau, president of the U.S. National Academy of Medicine and former chancellor of health affairs at Duke, with matching funds from The Bill & Melinda Gates Foundation.

View the full lecture below, or scroll down for more highlights.

Dr. Agnes Binagwaho is the co-founder of the University of Global Health Equity. A pediatrician by training, she currently serves on the Africa CDC Strategic Advisory Group of Experts and the Wellcome Global Monitor. Binagwaho served as Rwanda’s Minister of Health from 2011-2016. She held previous positions with the Rwandan Health Service as permanent secretary of the Ministry of Health and executive secretary of Rwanda's National AIDS Control Commission.

Dr. Paul Farmer is a medical anthropologist and physician who is also the co-founder and chief strategist for Partners in Health, an initiative that has been around since 1987, providing direct health care services and undertaken research and advocacy activities on behalf of those who are sick and living in poverty. He is also the chair of Harvard Medical School’s Department of Global Health and Social Medicine. Farmer graduated from Duke in 1982 and has served as a Duke University trustee and as a member of the Board Advisors for DGHI.

On achieving universal healthcare in Rwanda:

Farmer: I had some skepticism about policy, work and the swamp of empty promises, but Agnes and folks here really made a believer out of me. To see all these changes, occur with my own eyes, it was deeply humbling to me, and that’s something I learned here in Rwanda. I saw things change again and again with this iterative process, and a lot of us do credit Agnes with pushing for the idea of implementation with science or research. This was really the first time I saw it push forward to fruition, and it’s still a great learning experience for me.

On vaccine nationalism during COVID-19:

Farmer: It felt like a slow-motion disaster. The worst possible time to have nationalism or any kind of sectarian thinking is during a pandemic, which by definition is across national borders. I couldn’t believe hearing people in the Global North saying, “You can’t give them vaccines because they’ll waste them.” And here we are, disparaging programs in the Global South as incompetent to rolling out vaccines, and I knew [countries like Rwanda] would do a good job, and I hope it continues.

Binagwaho: Nationalism was there before COVID. I don’t believe it was the vaccine [that created this], it’s just the symptom of what was there before. Remember the travel ban, not people from a country, but a religion. And COVID came after that.

Editor’s note: Here Binagwaho refers to an executive order signed by former U.S. President Donald Trump in 2017, which critics called the “Muslim ban,” for prohibiting foreign nationals entry into the U.S. from a number of predominantly Muslim countries. 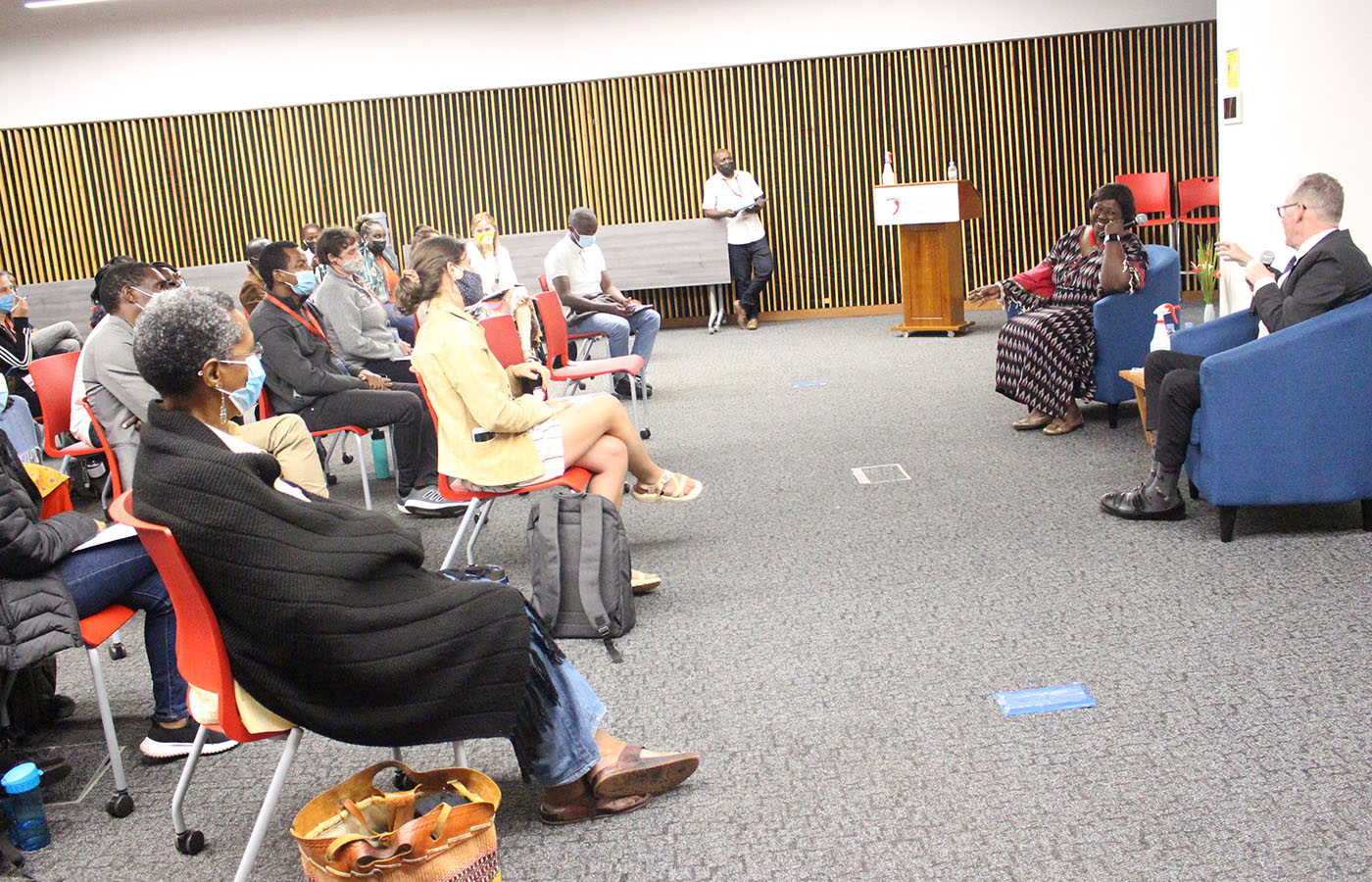 Agnes Binagwaho and Paul Farmer speak in front of students at the University of Global Health Equity in Rwanda, a school they co-founded. 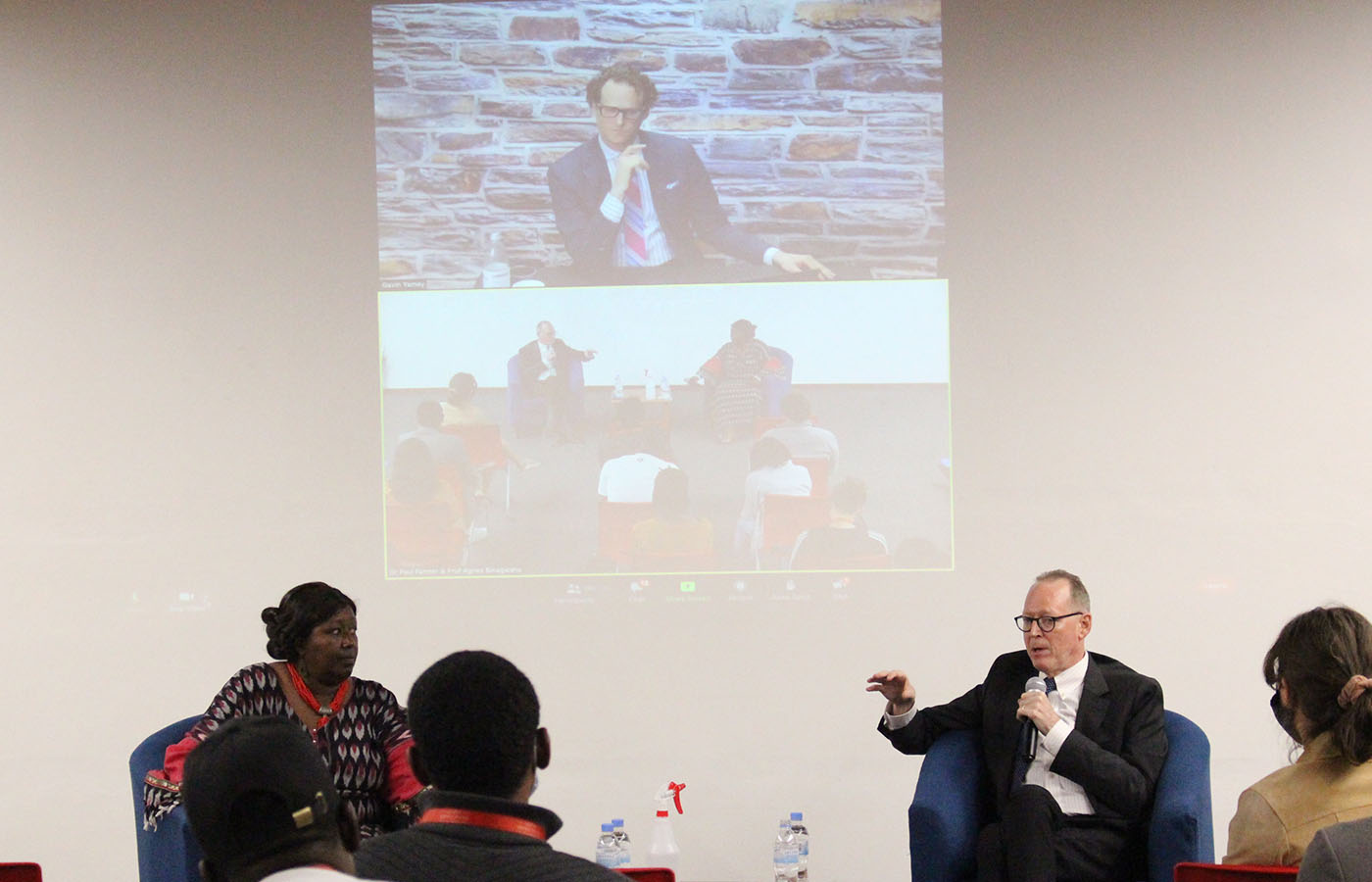 How students can prepare for careers in global health:

Farmer: What we can do now to prepare for responding to these emerging problems and ongoing problems is learning about them, too. Adding that to talk to other people, listen to people and learn to have not just cultural competence, but cultural humility. And that fosters the kind of understanding that will help us move forward and tackling very big problems.

Binagwaho: Be the best at what you do, that’s first. And second, focus on the most vulnerable, and never try to save the people without them participating. Talk to the people. Ask them how you can help, and how you can be of service. If you know that recipe, you are very good to go.

On the importance of cultural fluency for health practitioners:

Binagwaho: Before putting physiology and biochemistry in the heads of our students, we need to put global health principles in their hearts. If the seed takes, they’ll be great clinicians with  all the good practice to focus on the vulnerable… So much care can be given at home.

Farmer: This was built into the curriculum here [at University of Global Health Equity] even in the planning stages of service to communities and vulnerable communities. A lot of the [students] are from rural areas themselves. They are fluent in these customs – visiting patients in their home or asking families if everyone has shoes. In my third year at Harvard Medical School doing clinical rotations, I can promise you that we were nowhere near as fluent. By focusing on education, that’s where we’re going to get the real purchase on social change. It’s evident here.

Binagwaho: What we started to see in Rwanda is the family believes the patient is not better treated at a hospital but at home. It’s less costly, less disturbing and also it gives you an added approach to the community where you live. What I have learned – personally – is when you have as system that is people centric, you always do the maximum with the little you have. We don’t know what tomorrow has, but we need to apply that. We are managing it with little means, but so well because the people in charge created the system with resiliency.