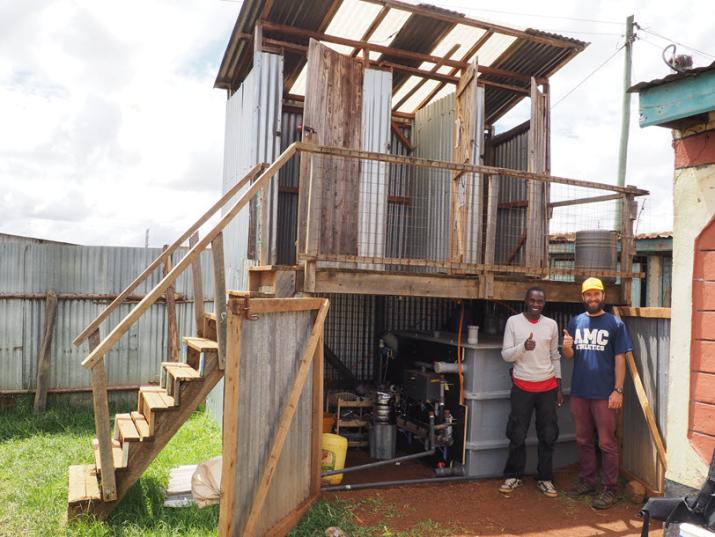 Marc Deshusses, professor of civil and environmental engineering and global health, is helping to bring sanitary bathroom facilities to people at high risk of diarrheal disease because they lack this basic amenity. He and his team have developed the Anaerobic Digestion Pasteurization Latrine (ADPL) with funding from the Bill & Melinda Gates Foundation. They’re now piloting this low-cost technology at five sites in Kenya, the Philippines and India.

Approximately 2.4 billion people lack access to basic sanitation services, and each day, nearly one thousand children die due to preventable diarrheal diseases. Sanitation is a particularly difficult problem to solve because conventional sanitation requires resources like water and energy, which are scarce in many areas of the world. Additionally, local preferences and cultural norms must be incorporated into sanitation solutions in order for the solution to be successful, but feedback can be difficult to elicit given the deeply personal nature of this topic.

An Efficient Solution with a Useful Byproduct

The ADPL provides clean, self-sufficient, odor-free latrines that are scalable for communities of 15 to 50 people. The units operate completely off the grid, only utilizing resources from fecal sludge. Anaerobic digestion of the fecal waste generates biogas, which is burned to pasteurize the system’s liquid effluent, which can then be used as fertilizer. A heat exchanger makes the system efficient enough to heat the treated effluent to sterilizing temperatures long enough to ensure the effluent is sanitized.

The ADPL has worked well at pilot locations in Eldoret, Kenya; Cebu, Philippines; and Chennai, India. Users of the latrines praise them for being well maintained, clean, low-odor, free of flies and well-lit. They also appreciate the fact that the process produces useful fertilizer.

The team’s current collaborators include engineer Patrick O’Meara in Eldoret, the Tesari Foundation in the Philippines, and the India Institute of Technology Madras in India. In the future, Deshusses hopes to expand these partnerships and scale up use of the systems, especially in South Africa and the Philippines, and train community members to maintain the systems.

Latest Developments and What’s Next

This year, the team improved the design of the ADPL and installed micro-controllers to enhance the systems’ efficiency. The controllers enable remote, real-time monitoring and text message notifications when a system component requires attention—a feature that will be particularly valuable when the project is scaled up.

Currently, the team is investigating ways to improve the system and collect more performance data. One idea Deshusses is exploring is post-treatment of the treated effluent that will allow it to be used to flush the toilets. Also, “The next logical step is to increase the scale of the project,” Deshusses said. “We’d like to have larger sets of data, collect feedback from users, and investigate health impact in our studies.” His goal is to expand the pilot to 40 to 50 systems.

Deshusses’ team includes Aaron Forbis-Stokes, a recent PhD graduate in civil and environmental engineering, former DGHI doctoral scholar and lead author on a paper about the project that was one of the top-read articles in Environmental Engineering Science in 2016.