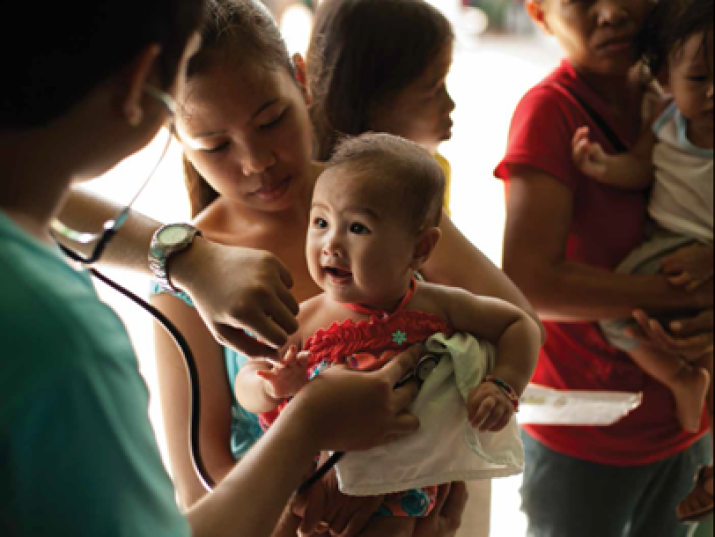 The third Sustainable Development Goal is to ensure healthy lives and promote well-being for all at all ages. Photo credit: WHO Regional Office for the Western Pacific's Institutional Repository for Information Sharing (WPRO IRIS).

Medicine and global health professor Shenglan Tang recently received a grant of $900K from the Bill & Melinda Gates Foundation to develop evidence-based policy options to support achieving the health sustainable development goals (SDGs) established by the United Nations (UN) and the “Healthy China 2030” plan for 2016-2030 developed by the Chinese Government. DGHI professors Mary Story and Gavin Yamey are co-investigators on the grant.

The objective of this project is to generate evidence-based approaches and offer policy options that can be used by the Chinese government to develop and implement effective health policies and achieve health equity throughout China. Specifically, the project team will:

Achieving the health SDGs has been put at the top of the agenda for future development in China. President Xi endorsed the UN summit SDGs in September 2015. He also announced that China would establish a new South-South cooperation aid fund with two billion USD to support other low and middle income countries to achieve the SDGs (including health) over the next five years. The government is prepared to allocate a total of 12 billion USD between now and 2030 as China’s contribution to achieving the SDGs in developing countries.

“China is faced with grand challenges to achieve the health SDGs, such as lack of health systems responsiveness, huge environmental health problems, a heavy burden of non-communicable disease and the number one adult smoking rate worldwide,” said Tang. “We hope that the project results generated from this project will be able to provide the Chinese government with high-quality evidence and policy options for action in order to achieve the ‘Healthy China 2030’ plan.”

The SDGs, which succeeded the Millennium Development Goals (MDGs), were adopted by United Nations member states in 2015 as a new development agenda to achieve poverty alleviation and secure the planet by 2030.

The SDGs have 17 goals and 169 targets. Unlike the MDGs, the SDGs embody a one-health strategy under a single goal, Goal 3—“ensure healthy lives and promote well-being for all at all ages”—the only goal that explicitly addresses health. A few other goals are associated, directly or indirectly, with health development, such as some targets in Goals 2 and 5. The key SDG health targets include maternal and child health, non-communicable diseases, injuries, infectious diseases, environmental health and health systems.

Achieving the Health SDGs in China

China has made tremendous progress in achieving the MDGs over the past decades. However, China still faces major challenges as the country works to achieve the health SDGs. As with other developing countries, China is faced with a huge burden of NCDs, high smoking rates, lack of road safety policies/laws, widespread stigma towards mental health issues, an insufficient health workforce, severe air pollution, food safety problems and lack of responsiveness from the health system.

In addition, the huge urban-rural development gap and the lagging societal progress compared with the unprecedented economic growth in China compound the challenges. Upon this background of challenges, the research team aims to generate evidence-based approaches for policy-makers to help China address these challenges to achieve SDG Goal 3.

The project will collect data from both national and regional levels, draw upon China’s experience in achieving MDGs and adopt case studies to conduct comprehensive analysis of the barriers and challenges.