A Second Time in Uganda: A Focus on Bioethics

Published September 16, 2013 under Voices of DGHI 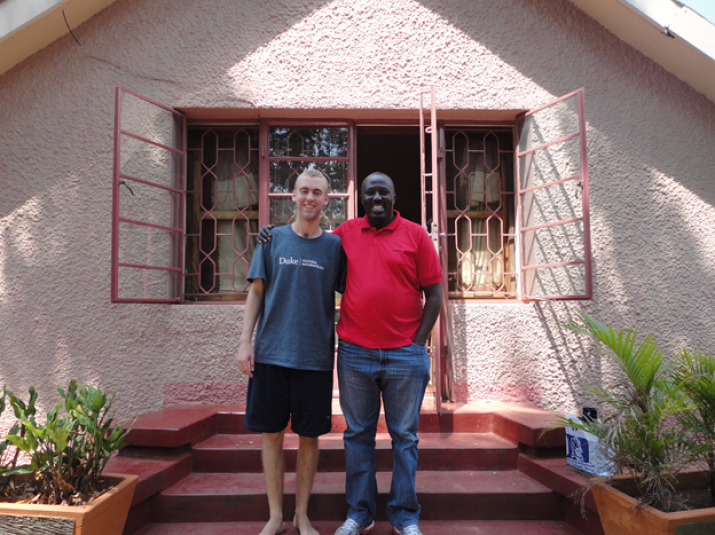 I met some amazing people along the way. Here is my in-country mentor, William Kidega, who helped me find interview contacts and sort out the logistics of being alone in a country across the world from your home.

This past summer, I was given the opportunity to return to Uganda, a country where I had spent two months last year with a DukeEngage group project.  The 2012 experience was my first exposure to the third world, other than having read vaguely about it in a few recommended books.  The fifteen of us spent the two months working in an orphanage, clinic, or school (or some combination of the three) where I witnessed both the positives and pitfalls of international service work.

After returning to Duke, I was inspired to get involved in the global health community. I searched for projects that didn’t just do short term good, as important as those are, but that looked into how to create long term positive change in developing nations.  I was lucky enough to get a position at Dr. Anthony So’s Global Health and Technology Access Program as a research assistant, which opened me up to the world of global health policymaking and bioethics.  It was with this background that I came in contact with Professor Kearsley Stewart, a new DGHI and Cultural Anthropology faculty member, who immediately welcomed my desire to return to Uganda and worked with me to create an independent project I could conduct.

Professor Stewart introduced me to an ongoing study she was conducting on Community Advisory Boards (CABs) in Uganda. When she first explained the project, I had no idea what CABs were and had to do a literature review to understand the true impact of these groups on resource-limited clinical research.

For those of you reading who are in my same position, I’ll provide a quick summary of CABs:

Over the past three decades, Community Advisory Boards (CABs) have become increasingly prevalent in clinical research, specifically within resource-limited environments.  The boards are made up of community members who are tasked as liaisons between the researchers and the study participants.  The board members act as – or should act as – monitors of researchers and research projects, ensuring community input and appropriate benefit.  These advisory boards create a much-needed forum for discussion of both the communities’ and researchers’ interests.  Due to the substantial increase in community based participatory research, the presence of CABs has quickly become standard practice for clinical vaccine and drug trials worldwide.

The empirical literature on CABs was severely lacking, which prompted Professor Stewart to begin a study in Uganda that would look at their roles from an ethical standpoint, examining whether they truly served the interests of the community.  Professor Stewart had supervised initial interviews with some key CAB players back in 2011, but further interviews were needed in order to form a more accurate picture of Uganda’s CAB landscape.  Luckily, I was given the opportunity to do just that through both DGHI and RIPP Engage, who funded me to return and carry out fifteen to twenty key informant interviews in the country.

That brings me to now, as I sit reflecting on my seven weeks.  From a research perspective, I (and I hope Professor Stewart agrees) would call it a success. I was able to complete 18 interviews spread across the country at four of its five major clinical HIV research institutions, as well as the Uganda National Council for Science and Technology.  The informants ranged from CAB members, to CAB liaisons, to research managers, and even an internationally acclaimed bioethicist.

Like with last year’s service work, my naïve eyes were made wide open to both the positives and pitfalls of research ethics work.  From the troubles of finding the contacts’ phone numbers without whitepages.com or even a phonebook, to navigating solo transport on the local matatus when the driver speaks no English and your destination is four hours away; it wasn’t always a smooth experience.  But as Professor Stewart said over Skype, “it never is, and it’s great you’re learning it now.”

In addition to the research perspective, I also met some people I am sure to stay in touch with for years to come – both professionally and personally.  Staying at a guest house on Makerere University’s campus, I was surrounded by people doing exactly what I hope to someday do.  Whether from Sweden, Singapore, Germany, Australia, Holland, Uganda, the UK, or Canada (no Americans were there the entire duration of my visit), these doctors – or almost doctors – spent their days in the casualty or labor wards of Mulago Hospital, the main referral hospital for the country.  Whether it was treating gas explosion burn victims in front of President Museveni or delivering six babies in one morning, the dinner conversations never got old.  They provided valuable advice for an over-eager twenty-year-old premed from the US hoping to someday find himself treating burn victims or delivering babies in a hospital just like Mulago.

I know most people type up in detail a bunch of deep moral lessons learned from their summer in Africa, but that’s not how I think.  I have learned my lessons, which have no doubt changed me as a person and academic. These include, to drastically paraphrase: not to over plan, to always remain patient, to respect local culture, and to always recognize the agency of the people you are working with.  These are not lessons you can learn in a classroom, even from a class on developing countries, for until you actually have the experiences yourself, it is always someone else’s words.

During my talks with the physicians at the guest house, I also came to realize just how rare an opportunity it was for a twenty year old student to be able to have such an experience.  These were seasoned professionals from some of the top schools in the US, and none of them had done service work before their medical degree.  None of their institutions facilitated such projects, and they only became aware of the field of international medicine through literature or later in their career.  They stressed the value of early exposure, how fortunate I was to be able to see the things I was seeing and do the things I was doing so early on, to help shape what I will become.  For that, I want to thank DGHI, Professor Stewart, DukeEngage, and Makerere University for giving me this opportunity.  The past two summers have shaped my path more than any course I have ever taken, and I extend my gratitude to all those who make these projects possible.