Alonzo Felder, DGHI’s long-time IT analyst, is logging off from Duke to help families explore their genealogy.

Published December 10, 2021 under Around DGHI

Written by By Alicia Banks 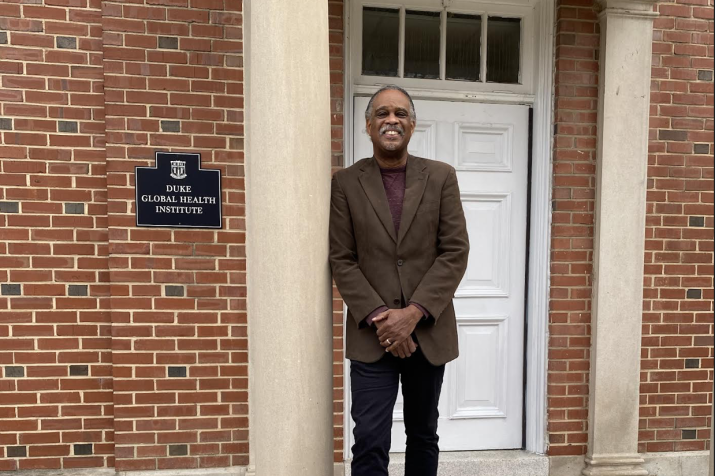 For the past decade, Alonzo Felder has been the go-to person for setting up or fixing anything computer-related at the Duke Global Health Institute. Virtually everyone knows him and his friendly, easy-going attitude.

But not many know that Felder, who will retire on Dec. 31 after 37 years with Duke, has spent years offering a different kind of service to families away from campus.

Felder is the CEO and founder of My Roots Foundation, a nonprofit organization that helps clients discover their family history through historical and genealogical research. Felder started the foundation in 2015 as a way to promote historical awareness by connecting people to their ancestors’ narrative.

“No matter who your parents are, I chose to believe the best of your ancestors lives in your blood, and you should look to see who they are,” Felder says. “It’s important to know where you came from, and how that can be used to direct your life now.”

Felder, who grew up in St. Petersburg, Fla., traces his interest in ancestry to an incident in his own family history. He learned his great grandfather, the Rev. A.S.J. Allen, was lynched over a land dispute with a White landowner in the early 1900s in Florida. The Black community Allen lived in hired two lawyers to bring charges against his killer.

“The case was unfortunately dismissed, but what's significant is it’s the first time a community of Black people got together and said, ‘No more. You can’t just kill us and walk away,’” Felder says. “It fascinated me. Who was this man, and what was so special about him?”

Felder has been working on a book about his great grandfather’s case, tentatively titled, “ASJ Allen: A Story of Skinfolk, Kinfolk and Village Folk,” which will publish in early 2022. He said learning about Allen’s life has given context to his own experiences with the civil rights movement. When he was young, his math tutor was a Freedom Rider. Felder participated in his first sit-in in 1961 in his hometown.

“It was a personal journey for me discovering my great grandfather, and what was so special about him that made a community do this,” says Felder. “I have this overwhelming desire to keep this legacy going so these stories aren’t forgotten.”

Through his work with the My Roots Foundation, Felder helps people understand a deeper picture of the lives of their ancestors beyond just ethnicity and birthplace. He shares a story of a client who knew only a few things about her biological father, mostly that he was violent and had repeated criminal offenses. Felder was able to find news articles showing that he once made a gift to an elementary school classmate who was ill, and was a star athlete in high school.

“It was the first time she saw anything good about her daddy,” Felder says. “I’m thinking of writing more with my love of research and databasing. There are a lot of family stories and themes where there aren’t a lot of books and material on so why not create it?”

Felder has held numerous positions at Duke since 1984. His first was as a Data Coordinator at the Duke Adult Comprehensive Sickle Cell Center, and he also worked in Duke Hospital’s Internal Medicine department, other medical center departments and the Duke Law School before joining DGHI in 2011. In 2020, he served on DGHI’s Equity Task Force, helping to identify steps to advance anti-racism efforts across the institute.

He says he never set a specific date for retirement, but just felt the time was right.

“I love my job, but what I’m looking forward to is waking up in the morning and deciding what this day will look like,” he says.

But the friendships and memories formed by working alongside colleagues in global health will stay with him, he says.

“The mission of global health – addressing health inequalities around the world – is honorable, and I’m going to take that with me,” Felder says. “It takes a village and a lot of people working diligently to make a change. This has been a good run, and I’m excited about what the future holds.”