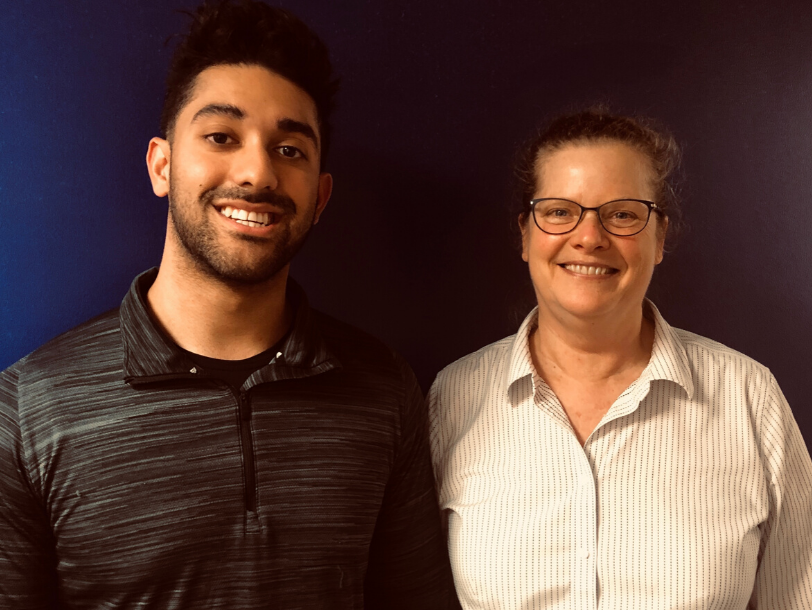 Shantanu Srivatsa MS-GH’20 and DGHI ethics professor Kearsley Stewart, authors of a new commentary in the AMA Journal of Ethics.

In January, Shantanu Srivatsa did something not many second-year master’s degree students can boast about—he published a commentary in one of the American Medical Association’s journals, the AMA Journal of Ethics. The AMA’s peer-reviewed publications are among the most prestigious in the field of medicine.

The opinion piece, “How Should Clinicians Integrate Mental Health into Epidemic Responses?”, was co-authored by his ethics professor, Kearsley Stewart, professor of the practice at Duke University, with joint appointments in the Duke Global Health Institute and Cultural Anthropology. Srivatsa talked with DGHI about his collaboration with Stewart and how his idea became a full-fledged article.

DGHI: How did the idea for your piece come about?

Srivatsa: It was a combination of a couple of things. We had been talking about the 2014 Ebola crisis in our classes as well as the effects of the 2010 cholera outbreak in Haiti. So, I was thinking about mental health and epidemics and how there wasn’t a lot of research and funding in this area. And it’s more relevant than ever now with the novel coronavirus and the quarantines happening. With quarantine, there are a lot of mental health effects. The whole concept of quarantine, it places limitations on peoples’ freedoms. But do you have the right to limit freedoms if you’re advocating for public health?

DGHI: How did you and Dr. Stewart end up collaborating on the commentary together?

Srivatsa: I initially approached Dr. Stewart after class one day and told her about my interest in writing an ethics paper. The way her ethics class was structured, when we write essays, it involves research, a literature review, and developing a structure similar to the type used in ethics commentaries. I wondered if it would be possible to write a commentary for an ethics journal since it would simply involve expanding upon skills we had already used in the class.

DGHI: How did you work with Dr. Stewart to develop the article?

Srivatsa: We met to discuss topics, an outline, and the structure, as well as the eventual goal of publication. I created an initial rough draft and Dr. Stewart helped add and remove content, re-focus the arguments, and restructure it in a manner for submission. After submission, the journal editors required three subsequent drafts and she helped edit it and make appropriate changes in line with their requests.

DGHI: Did you submit it for publication to numerous journals, or did you always know that the AMA Journal of Ethics was your publication target?

Srivatsa: The AMA Journal of Ethics was always the publication target. Every couple of months they have a new issue centered around a specific topic that is generating buzz or that’s been in the media a lot. The commentary topic for the January 2020 issue was centered on the ethics around epidemics and physician/provider response. Since we had discussed cholera, Ebola, and infectious disease epidemics in class, this seemed to be perfect for our paper.

DGHI: Any advice for other global health students interested in writing a commentary?

Srivatsa: Take initiative and find professors, such as Dr. Stewart, who work well with students and reciprocate academic interest, whether it be an ethics commentary or a policy analysis. It is extremely doable within two to three months to develop a draft and send in a commentary, and it doesn't require as extensive a timeframe as a normal data-driven publication requires.