Can a reboot of the 40-year-old declaration bring us any closer to its “health for all” ideals?

When a thousand of the world’s top health experts gathered in the city of Alma-Ata in the Soviet Union (now Almaty, Kazakhstan) in September 1978, they had visions of changing the course of human health.

The occasion was the first International Conference on Primary Health Care, a global summit organized by the World Health Organization and UNICEF to chart an agenda for the emerging field. After a week of meetings, delegates from 134 countries ratified what’s become known as the Alma-Ata Declaration, an elegant statement affirming the fundamental right of all people to live in health and advocating global investment in primary healthcare to achieve health for all by the year 2000.

It was bold, prophetic and instantly problematic.

“The statement was absolutely paralyzing in its beauty,” says Gavin Yamey, professor of global health and public policy at the Duke Global Health Institute. “It described this incredibly expansive view of ‘health for all,’ but it provided no road map and no way of operationalizing its goals.”

Without clear priorities, the gauzy idealism of Alma-Ata was short-lived. Less than a year after the Kazakh conference, the Rockefeller Foundation introduced a narrower package of services called “selective primary health care,” which became widely accepted by donors as a more realistic template for low-income countries. Inspirational as it may have been, the all-encompassing vision of “health for all” just wasn’t actionable.

But is the world ready for an Alma-Ata sequel? That depends, say DGHI policy experts.

The Astana conference redefines “health for all” in terms of universal health coverage (UHC), which the World Health Organization describes as a health system where all people have access to effective and necessary health services that they can afford. The concept has gained traction in recent years as a guiding principle for the global health agenda. But one stumbling block has been the lack of consensus on what should be included in UHC—namely, which services are “effective and necessary” and which are most important to support financially.

“UHC should be an explicit promise of publicly funded services,” says Yamey, who directs Duke’s Center for Policy Impact in Global Health. “Without that specificity, we run the risk of it becoming another empty promise.”

In a Lancet paper timed to coincide with the Astana conference, Yamey and 21 other experts in global health and economics offer one possible framework. The authors identified a package of 218 health interventions that address diseases common to low- and middle-income countries and, according to the study, are affordable and feasible to implement in those settings. Called “essential UHC,” the package is a broad expansion on selective primary care, including interventions such as surgery, palliative care, rehabilitation and pathology services.

“For the first time, we’re trying to describe what exactly we mean by universal health coverage,” Yamey says. He acknowledges that many may not agree with specific services included or omitted from the package but hopes that the concept of essential UHC encourages debate.

Speakers at a DGHI panel on the legacy of Alma-Ata echoed the need for clear-headed choices to achieve UHC. Osondu Ogbuoji, a research scholar in the Center for Policy Impact in Global Health, noted one recent analysis that showed that low- and middle-income countries would need to spend an additional $371 billion per year to reach the health-related benchmarks in the Sustainable Development Goals (SDGs).

“When you cannot afford everything, you have to make some choices,” Ogbuoji said. “And that will be the next phase of discussions we will have.”

That those discussions didn’t happen in 1978 made it easier for countries to shrug off Alma-Ata as too idealistic, he added, and created space for a narrower interpretation of global health priorities.

“Alma-Ata was supposed to usher in a focus on underlying determinants of health, on horizontal primary health care systems,” said Benjamin Meier, an associate professor of global health policy at the University of North Carolina-Chapel Hill. “And 18 years into the 20th century, health for all by the year 2000 still has not been met because we continue to prioritize vertical interventions for select diseases.”

Yet despite its practical shortcomings, panelists agreed that Alma-Ata’s gutsy vision remains a powerful guidepost for global health, one that has laid the groundwork for ambitious agendas to follow, such as the SDGs and the current push toward UHC.

“It really set the framework for health as a human right,” said Joy Noel Baumgartner, an assistant research professor of global health at Duke. “It was radical then, and it’s still radical today.”

But 40 years later, the lesson seems to be that bold vision means little without bold action.

“We can pass declarations, but it’s what happens afterward that is equally, if not more, important,” said Ogbuoji. “So whatever comes out of these declarations, I think we should plan to implement like crazy.

Watch highlights from the discussion: 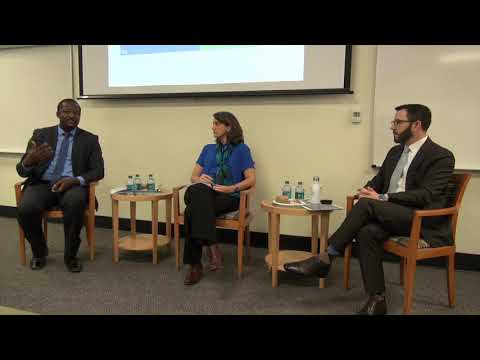 Poster image from the first International Conference on Primary Health Care in 1978 that led to the Alma-Ata Declaration.

We can pass declarations, but it’s what happens afterward that is equally, if not more, important

A Dispatch from Davos