Most middle school leadership programs don’t culminate with a trip to Uganda. But when Michael Haglund, distinguished professor of neurosurgery, neurobiology and global health at Duke, conceptualized a leadership initiative for eight middle school boys at the Durham Nativity School, taking them on a trip to the country where he’s realized his global health passion just made sense to him.

Oddly enough, this plan began to unfold when Haglund was tasked with leading the diversity and inclusion efforts in Duke’s Department of Neurosurgery last year.

Creating a Pipeline for Careers in Medicine

Haglund took the long view of increasing diversity. He wanted to incorporate a “pipeline” program for minority students to build their awareness and understanding of the medical field, help them envision medicine as a potential future career and give them some tools to succeed on that path.

“The question for me,” said Haglund, “was, ‘How far down can you push that pipeline? Is it medical school? College? High school? Middle school?’”

Around that time, he heard about the Durham Nativity School (DNS), a local tuition-free independent middle school that provides a rigorous academic and social development program for boys who have high potential for academic achievement but limited financial resources. With this discovery, Haglund saw an opportunity to bring his middle school pipeline idea to fruition.

Shortly thereafter, in consultation with DNS administrators QuRita Hunter and Ricky Oliver, Haglund developed an informal leadership program based on Angela Duckworth’s concept of “Grit: The Power of Passion and Perseverance.” He met with students once a month for about six months, with the goal of inspiring them as well as helping them build leadership skills.

That inspiration came not only from Haglund, a successful neurosurgeon, but through presentations and Q&As with several of Haglund’s colleagues who have overcome significant challenges to achieve their goals and make it through medical school and beyond. They discussed what it means to be a leader, how they developed their leadership skills and how they persevered to make their dreams a reality.

One of those colleagues was Tony Fuller, a fourth-year Duke medical student and a 2015 graduate of the Duke Master of Science in Global Health program who also accompanied the group to Uganda. Fuller, who has worked extensively with Haglund in Uganda, strongly believes in extending the “pipeline” to well before high school.

“Educational achievement, access to opportunities and life trajectories have already been significantly impacted by the time students reach high school,” Fuller said. “That’s why it’s necessary for pipeline programs to reach back as far as possible to truly create change in the systemic gaps within disadvantaged communities.”

The students enjoyed hearing the physicians’ success stories and took away some nuggets of wisdom. “They told us how they made it through life, through a lot of difficulties, and how they strived really hard to make it to the next stage,” reflected seventh grader Giovanni Escobar. “And they told us to keep focusing on our goals.” Another student, sixth grader Christopher Ortiz, noted that the messages the guest speakers shared reinforced many of the skills and values they’re learning at DNS.

While the leadership program may have been helpful and interesting, the most exciting part of the experience with Haglund—by all accounts—was their one-week trip to Uganda in March. DNS administrators Hunter and Oliver accompanied the group on the trip.

To understand how the Uganda trip fits in with this initiative, it’s helpful to know that Haglund has dedicated much of his career over the last ten years to building neurosurgical capacity and infrastructure in Uganda, which has 33 million people and only six neurosurgeons. He travels to Uganda twice a year to perform surgeries, conduct research and help train future neurosurgeons in collaboration with colleagues at several Ugandan institutions and hospitals. (Learn more about Haglund’s work here.)

Haglund wanted to share his love of Uganda with the DNS students and give them the opportunity to experience a different culture. Only two of the boys had ever traveled outside the United States. “Even though these boys come from difficult circumstances, their lives aren’t as difficult as what many people in Uganda experience,” said Haglund.

He also hoped the trip would motivate the students to think about the significant impact doctors can have in low- and middle-income countries.

While a trip to Mulago Hospital—where Haglund does most of his clinical work and research in Uganda—was on the agenda, the students spent most of their time absorbing the culture. They attended church and visited family homes, an orphanage, a market, a school, a zoo, a national park and the non-profit organization Beads for Life.

One of the highlights of their trip was playing soccer with boys from Pastor Ssenyojo’s orphanage outside of Kampala. Eighth grader Edgar Salazar remarked that it was easy to make friends with the boys because they had something in common with them: an affinity for soccer. The Duke/DNS group brought the boys soccer shorts and custom-made t-shirts donated by Eurosport, a company founded by the sons of DNS founders Joseph and Ann Carol Moylan. 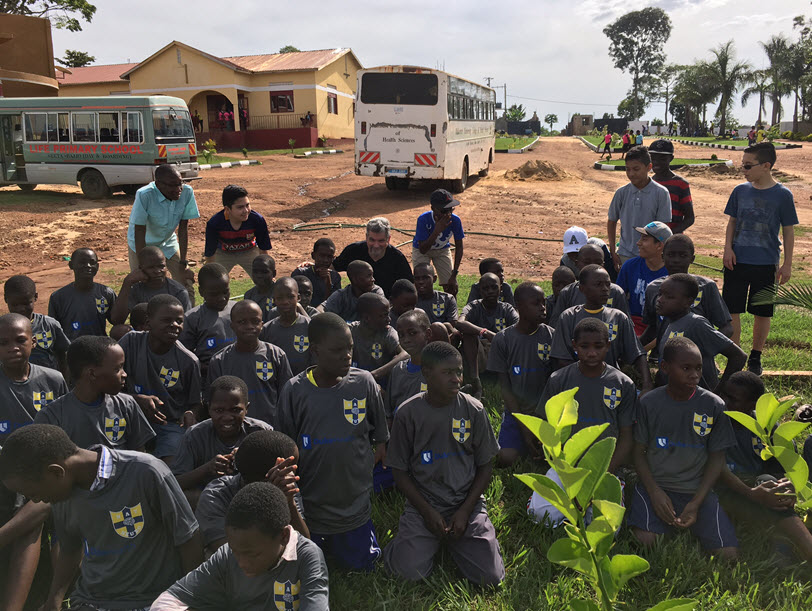 Durham Nativity School students (in back) and boys from the orphanage wearing their new t-shirts and shorts.

Their tour of Mulago Hospital raised the students’ awareness about health care disparities. “We saw the differences between hospitals in Uganda and hospitals in the U.S.,” said eighth grader Amir Britton. “For example, the families of the patients had to stay and sleep outside of the hospital because there was no room for them in the hospital. It just emphasized to me that Uganda is in need, and I’m glad somebody is working to help the people in that country.”

And Haglund and his colleagues prompted at least a few of the students to think more seriously about pursuing a career related to medicine. “I’ve always wanted to go into the medical field,” said Zoemie Zigbuo. “And this opportunity gave me a chance to see what surgeons actually do and why they do it.” His classmate Britton was also inspired: “This trip has me thinking about the different majors I can take in college,” he said.

The Impact: Gratitude, Humility and Inspiration

The long-term impact of the program on the DNS boys remains to be seen, but it certainly left an impression on the students. DNS social worker Oliver hopes that the program helps the students develop empathy and an “attitude of gratitude.” Oliver also sees humility as a critical quality of leadership. “I hope they’re humbled by their experience in Uganda and have come back with a different perspective on life,” he said. “And hopefully, they’re inspired to work harder and have a desire to give back more to their own community or the global community.”

Oliver’s aspirations for the program resonated with Amir Britton, who commented, “I think I’m more grateful and self-aware now, and I can take what I learned in Uganda back to the U.S. and help the community here.” Likewise, Edgar Salazar chimed in, “I’m really thankful for this trip because in the future, I may want to travel the world—and this is a great start.”

The program also left quite an impression on Haglund. “The most rewarding part of the experience was having a chance to see into the hearts and minds of the kids going to the Nativity School and the amazing things that school is doing,” he reflected. “It was an honor to be even a small part of what’s going on there, and hopefully, we’ve contributed something positive.” 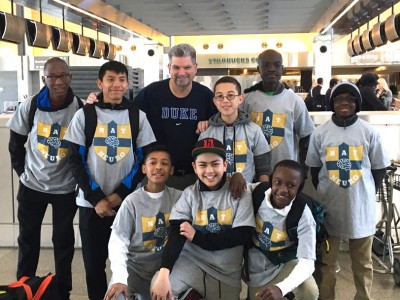 Eight boys from the Durham Nativity School pose with DGHI professor Michael Haglund at the Raleigh-Durham Airport on their way to Kampala, Uganda.

I think I’m more grateful and self-aware now, and I can take what I learned in Uganda back to the U.S. and help the community here.