It’s common knowledge that congested public places such as transit systems and airports harbor all kinds of potentially harmful microbes that pass easily from person to person. What’s not clear is which infectious agents might be lurking among them. Duke One Health researchers are using bioaerosol sampling—that is, testing airborne particles—to start chipping away at this question.

Their hope is that one day, this environmental sampling technique will be able to detect viruses quickly and accurately in high-risk, densely populated settings and be used to help inform outbreak prevention efforts.

In one study, members of a research team based at Duke-NUS in Singapore joined the more than three million riders on Singapore’s Mass Rapid Transit (MRT) system during peak ridership hours one day a week for a year, with samplers strapped to their backpacks to capture airborne respiratory viruses. They collected 89 samples from the trains and found adenovirus on nine occasions, respiratory syncytial virus (RSV) type A on four occasions, and influenza A virus on one occasion. The study was the first to detect airborne respiratory virus in Singapore’s transit system.

In another study, researchers based at Duke University in Durham, North Carolina, set up bioaerosol samplers during high-traffic periods in the departure gates and baggage claim areas of Raleigh Durham International Airport (RDU). In 12 sessions over about two months, they collected 72 samples and found evidence of influenza D in one sample and adenovirus in three samples. Similar to the Singapore project, this study was the first of its kind in the U.S.

“Our overarching goal for these studies is to see what pathogens we’re at risk for when we travel and figure out what we can do to try to mitigate the risks,” said Emily Bailey, a postdoctoral fellow and lead author of the RDU study.

The researchers are using samplers issued by the National Institute for Occupational Safety and Health in the US Centers for Disease Control and Prevention. After collection, they bring the samples to a lab, where they can use molecular assays to identify viruses in the samples within a few hours. The ultimate goal is to culture the viruses they find to determine whether the samples are infectious, and sequence the viral genomes to identify the specific strains circulating among the population—but neither of the research teams were able to culture virus from the samples they collected in these studies.

“Culturing aerosol samples is difficult, because the concentration and stability of viruses in the air is notoriously low,” said Kristen Coleman, a postdoctoral fellow based at Duke-NUS and lead author of the Singapore study. “You can’t actually say the aerosolized virus poses a risk unless you’re able to grow it in cell culture, so that will be a challenge for us as we continue this research.”

Bioaerosol samplers have been used for many years in occupational and clinical settings to measure bacteria, fungi and particulate matter, but the Duke One Health team is among the first researchers to deploy them to detect infectious respiratory viruses in public transit settings. The team has also used this technology to investigate the presence of viruses in emergency rooms, poultry markets, swine farms and pork processing plants in the U.S. and several Asian countries.

“We typically find at least a few virus detections in these places where people are traveling or mixing with animals,” said Bailey. “The novel aspect of this work is just being in the field, collecting samples from the air and using diagnostic tools to look for disease in those samples.” Until recently, she adds, surface swabbing and human sampling have been the primary virus detection methods.

Bioaerosol sampling offers significant benefits compared to other methods. It’s a portable, non-invasive piece of equipment that can be used effectively in a range of environments. Because the samples don’t trace viruses to specific individuals, researchers using the sampler aren’t required to pursue institutional review board approval or get informed consent from people in the sampling vicinity. And perhaps most importantly, samples collected using this method can be analyzed rapidly, yielding results within a few hours—an efficiency that could prove critical in the face of an outbreak threat.

The idea is that, rather than relying on individuals to contract a circulating virus, experience symptoms, seek medical care and await lab results, which can take several days, the sampler could quickly detect the virus in the environment and provide the data to inform a more efficient and effective public health response.

In addition, researchers, public health officials and policymakers will have to work together to develop early warning systems so the rapid results the bioaerosol sampling is capable of producing can be translated into practical outbreak control efforts.

In the meantime, the researchers can make direct recommendations based on their findings, such as minimizing the number of small, enclosed areas in an airport or optimizing the air filtration system in a subway system.

The Duke One Health team will continue to build on their work with bioaerosol samplers in both rural and urban settings. They’re currently conducting studies in China, Myanmar and Vietnam and are considering replicating the Singapore MRT study in the Shanghai Metro, the second longest subway system in the world.

And they hope their research has a ripple effect in the scientific community.

“We hope to motivate scientists to conduct field studies to unveil the true risk of exposure while using public transportation,” said Gregory Gray, head of the Duke One Health team and a professor of medicine, global health and environmental health at Duke. “We also hope to inspire bioengineers and scientific instrument companies to design and test improved bioaerosol sampling techniques that can be employed more broadly to surveil for threats in locations suspected to harbor infectious respiratory viruses.” 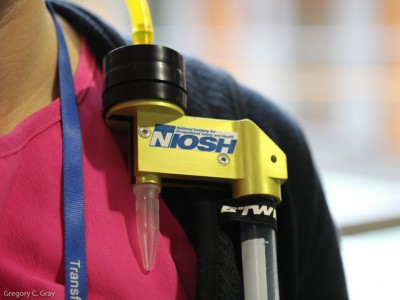 The bioaerosol sampler researchers wore during a study aimed at detecting viruses in the Singapore Mass Rapid Transit. Photo by Gregory Gray.

Our overarching goal for these studies is to see what pathogens we’re at risk for when we travel and figure out what we can do to try to mitigate the risks.