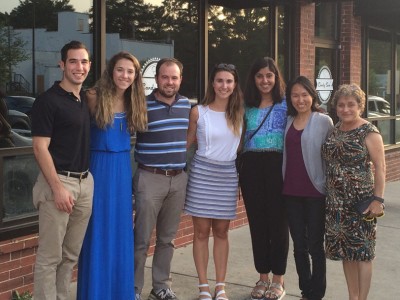 If you had told me when I was caring for the Chagga people in the middle of Tanzania that it would lead to taking care of members of our own Lumbee Indian community in North Carolina, I may not have believed you. But I am struck every day by the similarities in the two populations, the shortcomings of the health systems in the two countries, and the universality of what makes us sick and what it takes to be well.

I also would not have believed the program that made my yearlong fellowship in Tanzania possible, the Fogarty International Center at the National Institutes of Health, would ever be on the chopping block. But the near 50-year-old Fogarty Center is zeroed out in the President’s recent budget proposal. That’s a shame for doctors and researchers like me whose Fogarty Fellowship gave me the necessary skills and sensitivity to provide better care for my patients right here in North Carolina. It is also a shame and for the people served by Fogarty fellows across the U.S. and the world.

I was a new internal medicine resident at Duke and considering what specialty to pursue when I got my first exposure to global health, thanks to colleagues at the Duke Global Health Institute. They told me stories about how work in global settings transformed not only their careers, but their lives. They treated patients with infectious diseases they had only read about. In so doing, they advanced their knowledge about how diseases emerge and can now travel around the world at the speed of a jetliner, and more importantly they learned how to prevent and treat them.

They saw how doctors and nurses were forced to innovate and adapt in their health systems, teaching their American counterparts crucial lessons they could apply in their supposedly “advanced” settings. And they came to appreciate the humanity that unites us all: parents wanting a better life for their children, our perilous pursuit of health, and the fundamental desire to serve others.

I decided to specialize in nephrology because there was a notable gap in the medical literature about kidney disease among populations in sub-Saharan Africa. And thanks to the stories and advice of my Duke colleagues, I applied for and received a Fogarty Fellowship, which stationed me at a hospital called Kilimanjaro Christian Medical Center in the small city of Moshi at the foot of Mount Kilimanjaro.

The simple story is that I conducted research on kidney disease and cared for patients. But the truly transformative part of my own experience is that I learned to ask big questions about chronic disease that cannot be answered by working in a single setting like Moshi or Durham or Lumberton.

Patients with kidney disease came to our clinic unaware of their disease or what caused it. Their high blood pressure, heart disease, diabetes and obesity contributed to their kidney dysfunction. In my work with them and in collaboration with my Tanzanian colleagues and mentors, I began to peel back the layers to investigate the genetic, lifestyle and environmental factors contributing to their kidney disease. I became a better doctor and researcher. In coming to understand the harmful swirl of health disparities, I began to better appreciate the full range of barriers that impede peoples’ full realization of health in Tanzania and in North Carolina. I also realized the importance of talking and listening to patients, not only as a doctor but also as a researcher.

And I’m doing my best to pay it forward. I’m mentoring Duke students with an interest in global health. I bring them to Lumberton to teach them the most important lesson I learned as a fellow with the Fogarty International Center: what’s global is local.

Stanifer is a nephrology fellow who practices at Duke Health in Durham and conducts research with UNC Pembroke and Southeastern Health in Robeson County, North Carolina.

The truly transformative part of my own experience is that I learned to ask big questions about chronic disease that cannot be answered by working in a single setting like Moshi or Durham or Lumberton.