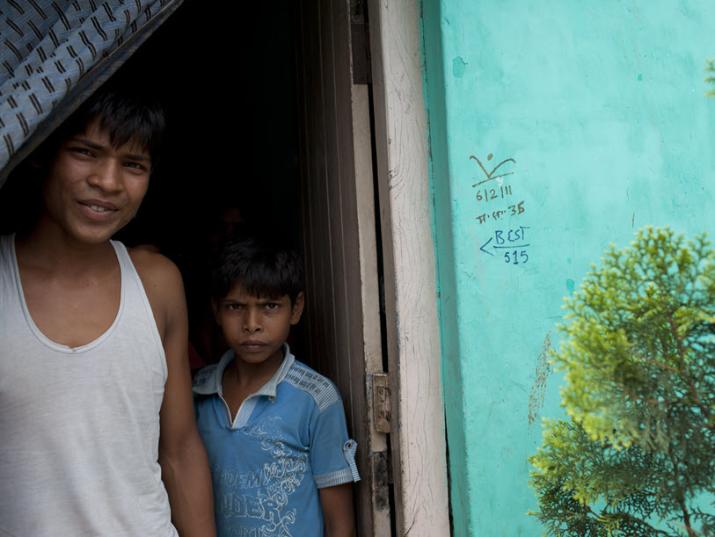 These two members of a family in Bihar participated in the research study. (Photo credit: Anna Maria Barry-Jester)

A widely hailed initiative that combines franchising business models and telemedicine to deliver better quality health care in rural India has failed to improve care for childhood diarrhea and pneumonia, according to a large-scale study by researchers at Duke, Stanford and University College London.

Preventable and treatable illnesses such as diarrhea and pneumonia claimed the lives of nearly a half million Indian children under age five in 2013 alone. In rural areas, health care services are typically provided by unqualified practitioners working in the informal sector, and the quality of care is often poor.

The Goal: Getting Better Health Care to Kids

The World Health Partners (WHP) Sky program, funded with grants exceeding $23 million from the Bill & Melinda Gates Foundation and other donors, aimed to address these problems.

The program sought to train and enroll thousands of informal providers and create a massive network of franchisees to deliver more effective health care in rural areas of Bihar, an Indian state with more than 100 million residents.

“Children in rural Bihar do not receive the correct treatment, even though treatment for common illnesses like simple diarrhea is well known, inexpensive and widely available,” said lead author Manoj Mohanan, an assistant professor of public policy and global health.

“The WHP model of social franchising aimed to significantly improve rates of appropriate treatment of childhood diarrhea and pneumonia.”

Because there was no rigorous evidence on the effectiveness of large-scale social franchising programs, the program’s major funder, the Gates Foundation, also invested in an independent evaluation. This is one of the first large-scale studies of the impact of social franchising, and it underscores the need for rigorous evaluation of innovative programs before scaling them up or replicating them in other places, Mohanan said.

The findings were published earlier this month in a Health Affairs issue that includes a number of studies focused on India. In addition to research findings, the issue includes an overview analysis, “Quality of Health Care in India: Challenges, Priorities and the Road Ahead,” by Mohanan and co-authors.

Watch the video describing the project:

What is social franchising?

Social franchising uses methods similar to those used in commercial franchising: the franchiser provides branding, marketing, standardization of service delivery, training and supply chain management, while the franchisee pays to join the network to access these services and collects fees from customers.

Between 2011 and 2014, the WHP Sky program developed a network of about 9,000 franchisees, most of whom were informal sector practitioners. The program’s original goal was to build a network of 20,000 practitioners. It trained providers how to offer a range of primary care services, including diagnostic consultations and drug prescriptions.

The network included some providers who had set up telemedicine facilities in communities with Internet connectivity. Telemedicine allows local village providers to hook patients up to diagnostic tools that are connected via the Internet to doctors in central facilities as far away as Delhi.

The doctors can remotely examine patients and speak with them in real time using an audio-video interface. The technology can transmit chest sounds, blood pressure, pulse and even ECG (called EKG in the U.S.) readings to a trained doctor.

However, the majority of providers in the network did not have sophisticated telemedicine facilities, but were smaller rural practitioners who could call up qualified doctors if they needed consulting support.

While the evaluation was still in progress, the WHP Sky program received accolades globally for its work in social entrepreneurship, including the 2013 World Economic Forum-Schwab Foundation Award, 2013 Skoll Award and 2015 Asian Award.

To evaluate the impact of the program, researchers collected data on 36,315 randomly selected children ages five and under in 2011 and another 31,635 children in 2014. The study controlled for several variables, including literacy of the child’s mother, the number of other children in the household, income level and caste.

“There are a number of likely reasons why the program failed to have an impact,” Mohanan said. “Most importantly, the business model was based on untested assumptions about demand—not only practitioners’ willingness to pay to join the network, but also the level of demand for care provided by members in the network.”

The key lesson for governments and international donors considering investing large amounts of funding into similar programs, Mohanan said, is that social franchising has a lot of potential to succeed, but evidence of its successful impact when implemented on a large scale is yet to be seen.

“Future efforts in social franchising that aim to deliver higher quality health care services might want to first rigorously test their assumptions about demand among potential franchisees, and the patients’ willingness to pay for improvements in quality of services provided,” added Mohanan.

The study’s co-authors are Kimberly S. Babiarz, Jeremy D. Goldhaber-Fiebert and Grant Miller, all of the Stanford University School of Medicine, and Marcos Vera-Hernández, Department of Economics, University College London.

Funding for the study was provided by the Bill & Melinda Gates Foundation as part of the Bihar Evaluation of Social Franchising and Telemedicine (BEST) project.

This article was adapted from an article originally published by the Duke Sanford School of Public Policy (reprinted and adapted with permission).