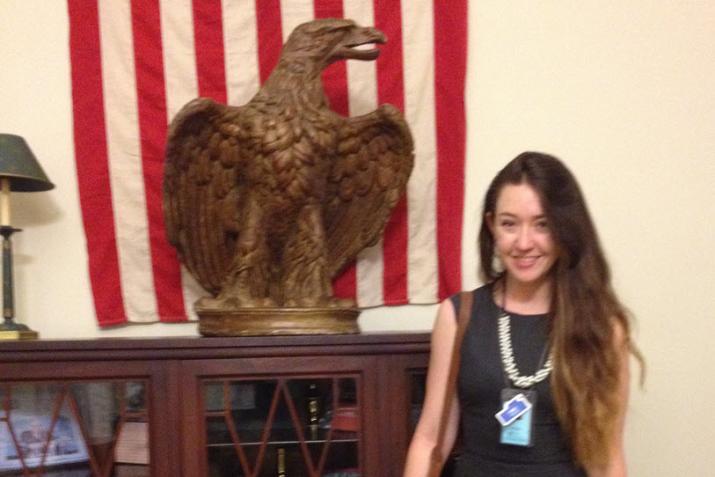 Jordan Schermerhorn at the White House.

After Jordan Schermerhorn, a 2015 Master of Science in Global Health graduate, finished her degree, she spent five months making her mark in the nation’s capital on policy initiatives with the White House Office of National AIDS Policy.

Schermerhorn worked with the ONAP on updating the National HIV/AIDS Strategy to be implemented over the next five years. “It was an extremely surreal and extremely rewarding summer to be in that office," she said. "The day after I started, the National Institutes of Health (NIH) released the results of a study demonstrating the benefits of antiretroviral treatment beginning at HIV diagnosis, and it didn't really slow down from there."

Her work at the White House helped her gain a bird’s-eye-view about health issues at the systems level, integrating health science and coordinating efforts across agencies.

After completing her stint at the ONAP, Schermerhorn has been working on global health evaluation for a United States Agency for International Development (USAID)-funded project on refugee housing in Lebanon for the prevention of leishmaniosis, diarrheal diseases and hypothermia. It's a project that has already brought her some fulfillment. She believes the refugee situation is the great humanitarian crisis of our era, that issues of health access in the Middle East are often overshadowed and that strong social services, such as healthcare, can assist with stability.

This perspective is also shaped by her prior three years of experience designing and implementing text message reminders for childhood immunization appointments with the UN agency that serves Palestinian refugees.

DGHI Allowed for Flexibility to Pursue this Path

After plunging into the global health workforce last year, Schermerhorn has had time to reflect on her experience at DGHI. “Ultimately, I chose Duke because while I knew I wanted to pursue a degree in global health, I was also really interested in the national security classes offered at the Sanford School, and I knew Duke had a strong program in Middle East studies,” said Schermerhorn. “One of my security classes included mid-career military fellows from Fort Bragg, one of whom had just returned from Ebola response efforts in Liberia and another who had been deployed to Uganda after the Kony 2012 debacle. The varied peer group really opened my eyes.”

She values the exposure that got to actors in global health beyond traditional realms of non-governmental organizations, academia, and USAID contractors.

Schermerhorn expects her future work to be at the nexus of global health, development and national security. “In the United States, these intellectual communities can sometimes seem so at odds, but they have so many of the same end goals: human prosperity, stable communities and mitigation of violence," Schermerhorn said. "The field interviews from my thesis work on delayed immunizations in Jordan also strengthened my belief in the link between strong health systems and faith in institutions, which can work wonders in unstable environments such as the recent Ebola crisis in West Africa.”

Schermerhorn noted that she wants her future work to integrate time behind the desk and in the field. “This spring I took EMT courses, and when the timing works, I'd like to find a way to serve part-time with military humanitarian response missions. There is so much to learn, and I'm increasingly humbled.”