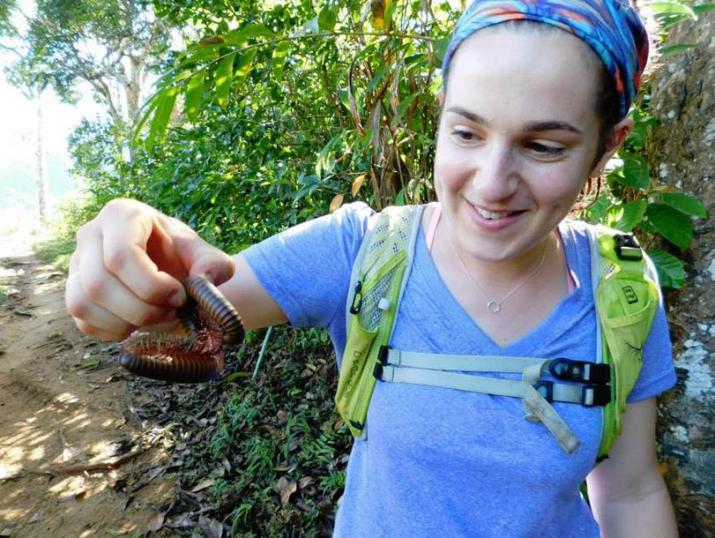 Melissa Manus '16 holding a giant African millipede (Archispirostreptus gigas), one of her favorite insects, on a trip to Madagascar in 2015.

Melissa Manus ’16 was drawn to the Duke Master of Science in Global Health (MSc-GH) program because of its focus on global research and learning beyond the classroom. And a meeting with global health and evolutionary anthropology professor Charles Nunn during her decision-making process sealed the deal for her.

Manus and Nunn share an interest in evolutionary medicine—that is, using an evolutionary perspective to understand why we get sick, and ultimately improve human and animal health. With an undergraduate degree in ecology and evolutionary biology from Tulane University, Manus was eager to pursue her passion as part of her graduate studies, so the MSc-GH program was a great match.

“I've been interested in evolutionary medicine since high school, but I didn’t know what it was called,” said Manus, who went to college thinking she’d eventually go to medical school. “And then, in my senior year of college, I took a course called ‘Evolution and Human Health,’ and that hit the nail on the head for me.”

The course broke down common diseases with an evolutionary approach—for example, why some populations are more prone to certain diseases than others or why some diseases evolve to be more virulent than others. For instance, to be born with sickle cell disease (SCD), you need to inherit two copies of an abnormal gene. People with only one copy have sickle cell trait, which confers resistance to malaria. An evolutionary perspective explains why SCD occurs primarily in people of African descent—being a carrier was advantageous for people living in Africa, where malaria is relatively common. This evolutionary history has kept the sickle cell trait active in populations that now live in malaria-free areas.

Manus Attracted to Rigor and Flexibility of MSc-GH Program

After graduating from Tulane, Manus headed to South Africa to work with the Malaria Awareness Program (MAP), an initiative co-founded by global health certificate alumna Katie Guidera. She helped train community health workers on how to educate the local population on malaria prevention strategies for families. Meanwhile, she began researching graduate programs.

Manus saw the MSc-GH, with its focus on developing research skills, as a way to gain experience in scientific research and writing before pursuing a PhD program. She liked the thesis requirement and relished the opportunity to develop and implement an in-depth research project tailored to her specific academic interests in the country of her choice.

For her master’s thesis, Manus traveled to Mandena, a small village in northeast Madagascar, to assess how human contact with domesticated cattle (aomby) influences the bacteria that live on our skin. She sequenced DNA samples from the aomby and from humans, looking for the presence and diversity of bacterial species. Contrary to her hypothesis, she found that contact between humans and aomby did not result in a clear signature of microbial sharing between the two. Rather, the skin microbiome seems to be more strongly influenced by one’s environment—in this case, soil and water—than by contact with the aomby.

Manus conducted her thesis research as part of a Bass Connections in Global Health team. “The MSc-GH program has plenty of strengths on its own,” she said, “but it was the Bass Connections program that enabled me to find like-minded students and really delve into evolutionary medicine.”

After graduating from the MSc-GH program in May, Manus transitioned into a leadership role as the assistant director of the Triangle Center for Evolutionary Medicine (TriCEM), a new organization based at Duke and led by Nunn.

This summer, Manus co-led a Bass Connections team with Nunn that returned to Mandena to build on the work of last year’s Bass Connections project. This year’s project explored the effect of traditional cooking practices on human and environmental health. She and Nunn anticipate returning to Mandena again next summer to continue their work.

Manus is planning to pursue a PhD program in the next few years, but for now, she’s excited to be a part of TriCEM—one of only ten evolutionary medicine centers in the world.

“There aren’t any PhD programs for evolutionary medicine right now, but the field is growing, so we’ll see what’s available when I’m ready to go back to school,” she said. “In the meantime, my role at TriCEM allows me to continue my work with Charlie [Nunn], deepen my understanding of evolutionary medicine and network with leaders in the field. It’s a great opportunity.”

Curious about what other alumni are doing now? Read more student and alumni profiles here.