Back to Africa: My Second First Impression Living in the Original Home of Homo Sapiens 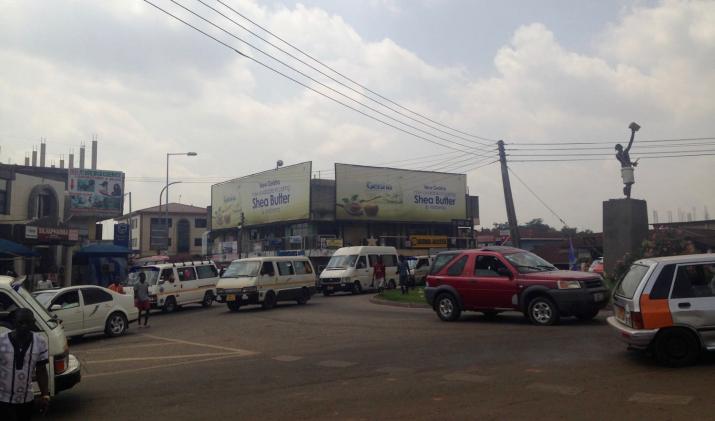 The streets of Kumasi hum with life. Pictured above is the roundabout near the entrance of the Komfo Anokye Teaching Hospital, my partner institution.

Before I left for my joint Bass Connections and DukeEngage indy project in Ghana this summer, I considered myself fairly well informed about the continent.

Based on my experiences, I prepared myself for roads that made me thankful of the ones in Durham, for cold showers that would make me shiver more than any wintry day in the Northeast, and for two months without cheese.

In the one and a half weeks that I’ve been here in Ghana, I still have not had cheese and the showers are still cold. But I have sat in the most comfortable bus seats in my life, used a mobile payment system far more advanced and widely adopted than anything in the U.S., and rode on roads better paved than the potholed ones in my hometown in New Jersey.

When I walk through the parking lot of the medical student hostel where I’m staying, I count more cars than there are parking spaces, and I spot the occasional BMW. When I walk through the study rooms, I see students with tablets in hand and laptops on desks. I am living in cosmopolitan Kumasi, Ghana, and I can feel the brightness of the future.

Why then were my expectations so far off? The issue was that I learned about the continent by reading about its problems, and I had only lived in a rural part of just one constituent country. It was as if a student visiting Duke’s campus only read news articles on Duke’s recent scandals and spent his or her time walking around Central Campus.

But I believe there’s also a much deeper factor in play: the language used to describe summer immersion experiences in general. DukeEngage prides itself on the service that its students engage in. Bass Connections boasts of tackling novel interdisciplinary problems. Yet don’t “service” and “problem” necessarily imply that the target communities are in need of improvement? That these communities are inherently lesser-than?

The classic Whorfian hypothesis in psychology states the structure of a language influences the thoughts of those speaking that language. Therefore, a lack of certain words in a language impairs the ability to communicate and think. For example, the English language has one word for reindeer. In contrast, the Sami people, who live in the northern stretches of Russia and Scandinavia, have more than 1,000 individual terms regarding reindeer. I readily admit that I’ve never seriously thought about reindeer before.

But we actually have words like “potential” and “prosperity” in our lexicon. Let’s start using them as we describe the communities that have so graciously welcomed us.

I can start: Kumasi is full of potential, not problems.