For Better Healthcare, a Little Empathy Goes a Long Way 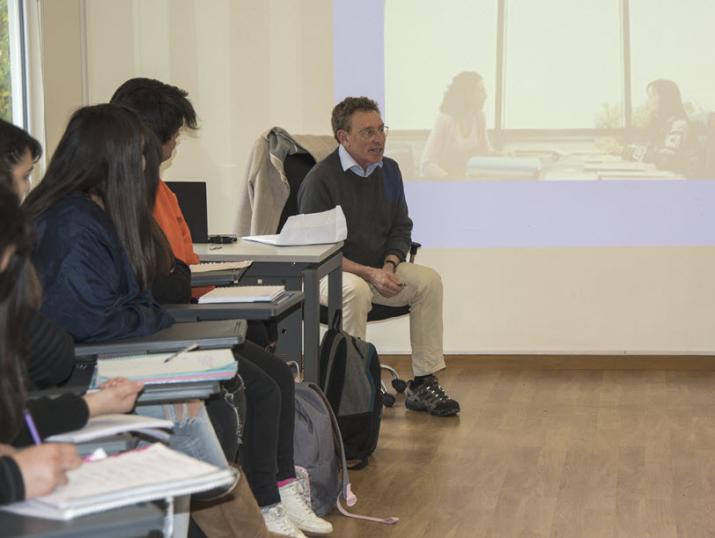 Neil Prose (on right) shows a video during his recent course in Chile on respectful maternity care. Photo by Rhonda Klevansky.

Early in his career as a pediatric dermatologist, Neil Prose realized that the part of medicine he enjoys most is connecting with his patients. He noticed, though, that while he viewed relationship-building as about half of his work as a healthcare provider, many other doctors did not prioritize this aspect of patient care.

“Patients often complain that their doctors and nurses don’t listen to them or don’t empathize with them,” he said. “But most medical education programs dedicate only a small fraction of time to developing these critical empathic communication skills.”

Prose decided to do something about this disconnect. He began teaching patient communication skills to providers-in-training, first—and for many years—at Duke University and a number of other institutions, and more recently in South Africa, Ethiopia and Chile.

Empathic communication involves making intentional choices about interacting respectfully with patients. It includes actions such as sitting instead of standing when talking with patients, asking patients open-ended questions and carefully listening to their responses, expressing support, reiterating patients’ responses to ensure mutual understanding, validating patients’ emotions and collaboratively devising and executing a care plan with the patient.

Prose, a longtime affiliate and recently-appointed faculty member of the Duke Global Health Institute, extended this work internationally when he was awarded a Fulbright scholarship in 2012 to teach and conduct research at the University of Kwazulu-Natal in Durban, South Africa. There, he helped develop an empathic communication curriculum for medical students and residents in their native language of IsiZulu.

Within the last few years, Prose became aware of the prevalence of mistreatment and neglect of women in prenatal through postpartum care in many countries across the world. He saw an opportunity to make an impact in this area by developing training that teaches empathic communication skills while also addressing compassionate care issues specific to women receiving maternity care.

In 2016, Prose began working as a consultant with the Institute for Healthcare Improvement on a national neonatal and maternal health project in Ethiopia. He helped to develop a workshop for midwives and health extension workers that focused on empathic communication and other topics such as ensuring privacy for women in childbirth and allowing women to have birth companions. This course has since become part of a national program in Ethiopia.

And just last month, he traveled to Coyhaique, Chile, to teach empathic communication to 40 midwifery students at the newly-established Universidad de Aysén and also to about 30 local healthcare professionals. Prose and his wife have traveled annually for nearly 20 years to Coyhaique, a small, isolated city in the Chilean Patagonia that has—along with the surrounding rural area of Aysén—historically suffered from limited education and healthcare resources.

When the university was founded in 2015 and Prose learned that it would offer a midwifery degree, he approached its president, Maria-Teresa Marshall, to offer to share his expertise in provider-patient communication with the students. The university leadership eagerly accepted his proposal, and Prose began planning the workshop last year with Pablo Loayza, the head of the university’s International Relations Office, and Ximena Paredes, the director of the midwifery program.

“The topic of empathic communication has become very relevant, and it’s been neglected in the training of health professionals,” Loayza said. “And it’s particularly applicable in Patagonia, where many of the medical providers come from other parts of the country and don’t have a long-term commitment to our community, which tends to make them less motivated to establish a meaningful connection with their patients.”

Loayza believes that, in addition to addressing a clear community need—about 80 percent of the students will most likely stay in the region after they graduate—the skills this type of training builds will set the Universidad de Aysén students apart from their peers in other midwifery programs.

In this video,* Prose reflects on the course and the students and shares what he enjoyed most about the experience:

In his training courses, Prose typically asks participants to reflect on an experience in which they or a family member were a patient and to consider what made that experience positive or negative and what they would have done differently if they were the provider. “The point of this exercise is to get them to see the world through the eyes of the patient,” he said, “because that’s the way one learns empathic skills.” That reflection then leads into a discussion about the attributes of a good provider.

Another key component of Prose’s training approach is the use of video and images. “In my experience, stories are incredibly powerful,” he said. In the Universidad de Aysén training, for example, which Prose conducted in Spanish, they watched a video in which a woman describes the ways in which she was treated rudely and disrespectfully by her obstetrician at a public hospital in Chile. They reflected on how that scene made them feel. “A few of the students responded that it made them feel ‘sad’ and ‘furious,’” Prose recalled, “and I thought that was perfect—that’s the combination you need to inspire change.”

Prose also incorporates role play into the training, often inviting actors to assist in the activity. For the training at the Universidad de Aysén, his first time working with an actor in another country, he hired actress Daniella Vicentini. The students role played scenarios such as delivering a difficult diagnosis and talking to a pregnant woman at risk of developing diabetes about the need to change her diet.

The role plays and other workshop activities were well received by the students. One student found that sharing personal experiences was particularly helpful because “it helps us never to forget what it was like to be a patient and to understand and identify the things we do and don’t want to do as midwives.”

The local healthcare providers also appreciated the workshop. “It’s clear from talking with them after the session that respectful patient communication is important to them,” said Loayza, “but they don't have the formal spaces to reflect on and discuss these issues and think about how they can interact more effectively with patients.”

Prose hopes to conduct more empathic communication training at the Universidad de Aysén. He’s envisioning a retreat in the next year that will focus on empowering the students to advocate for empathic patient communication and respectful care in a health system that doesn’t always prioritize this approach.

“We’re privileged to have Neil working with us,” said Loayza. “We’re very interested in establishing a more formal relationship with him so he can share his input and expertise not only with the students, but also with our faculty.”

In the meantime, Prose, who co-directs the Health Humanities Lab at Duke, will continue pursuing this passion stateside, chipping away at his vision for all healthcare providers to deliver respectful, empathic patient care.