How a summer research internship turned personal, then grew into an undergrad global health thesis 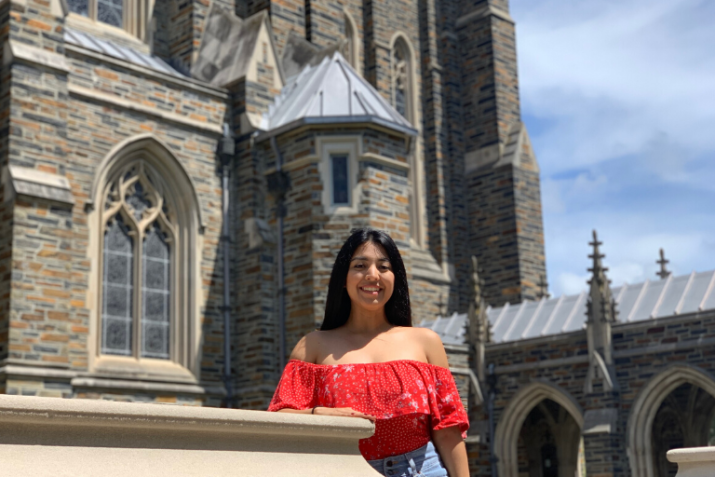 Sujeiry Jimenez '20, at Duke in pre-pandemic days, will graduate virtually this month with her 2020 classmates. (Photo courtesy of Sujeiry Jimenez)

“I had no idea what global health was,” says Sujeiry Jimenez, about the first time she visited the Duke campus as a prospective high school senior. She'd traveled from Verona, Missouri, after being invited to learn more about the university.

“The first info session I went to was on global health and I was probably thinking it was related to biology or a pre-med track course. I had heard of public health, but not global health,” she says.

Smitten with “the Hogwarts look,” the people she met and "the homey feeling" on campus, Jimenez headed to Duke for college the following year. She took some global health classes and when it was time to declare her major, she picked public policy with a global health minor and tacked on a human rights certificate.

During a Duke Engage research program in Tucson, Arizona, the summer after her sophomore year, Jimenez says her interest in global health grew into a passion.

“I worked with an amazing advocacy group that focused on LBGT-identifying immigrants going through border centers. We looked at their health and especially at how being in a border center for years and years affects people, and the massive human rights violations. I really saw the culmination of all my interests and how important public policy is to health. I grew a lot during that summer. It all came together,” she says.

Back on campus junior year, Jimenez continued taking global health classes — diving into subjects such as ethics and immigration health. The following summer, an internship with an organization that did farm worker advocacy introduced her for the first time to The Bracero Program, a bilateral labor agreement between the U.S. and Mexico that lasted from 1942 to 1964. It brought millions of Mexican men to the U.S. where they signed labor contracts, mostly for work in agriculture.

Jimenez learned that the program was rife with health disparities, from initial "health screening processes" that she says in her thesis were "less concerned with their personal wellbeing and more concerned with protecting American citizens from potential diseases." She found that the U.S. government also excluded men based on behavioral qualities — primarily seeking those who were timid and docile, uneducated and impoverished. Living conditions were generally crowded and unsanitary, work hours were long in desert heat temperatures, healthcare resources and access was spotty, and pay was inconsistent... sometimes nonexistent. Jimenez's research on los braceros led her to a personal discovery, as well.

“I learned that summer that a family member, my great grandfather, had been a bracero,” she says, explaining in her thesis that the name stems from brazo, the word for arm in Spanish. Men with strong arms were selected for labor in the U.S.

When Jimenez talked with her project advisor, Charles Thompson, professor of the practice in the Department of Cultural Anthropology, about her family connection, he encouraged her to pursue research on The Bracero Program, especially since there wasn't a lot of scholarly work on the topic.

Upon her return to Duke as a senior, Jimenez says she wasn’t sure she wanted to pursue a thesis, which is optional for undergraduates.

“The vast majority of undergrads don’t do one,” she notes. But when Thompson told her she could focus on a topic outside of her public policy major, that clinched it. She would write about global health, taking a “global is local” approach, focusing on health disparities closer to home in the American Southwest — The Bracero Program.

“The summer before, as I was conducting research, I had realized a lot of people didn’t know about The Bracero Program. At the time, I was wondering, ‘Why don’t people know about this?’ I mean, the men were fumigated. As I filled out [thesis] forms, it really came to me that this thesis was going to be for myself, my family, and for a community whose voices had been suppressed and I was going to put that in the forefront,” says Jimenez.

And thus began her thesis process, which she describes as, at times, a roller coaster. Jimenez notes that her thesis is different from her peers’ because it is based on quantitative research — culling through recorded interviews from archives and conducting two live interviews in Spanish with men who had worked in The Braceros Program, and then transcribing them "which took hours!" she says.

“I questioned it a bunch. I thought at times, ‘I don’t have the will to push through this thesis,’ but I talked with my parents and my great grandfather, who was a bracero, and I said to myself, ‘This thesis is not for me. It’s for the community and the voices needed to be heard. Love for family and community powered me through to the end.”

As the COVID-19 pandemic descended, she returned home to her parents and siblings in Missouri, where she wrapped up her thesis, presenting it virtually to her committee with shining reviews.

Next steps? Jimenez plans to participate in an AmeriCorps program specifically focused on public health and marginalized communities — if pandemic measures allow.

And there may be more school in her future. She says, “I’m thinking of pursuing a master’s degree in public health. I’m thinking I’m more interested in a domestic perspective about how communities here function. I always tell people, ‘global is local.'"