A student with a passion for medicine and engineering finds a model for her desired career in global health. 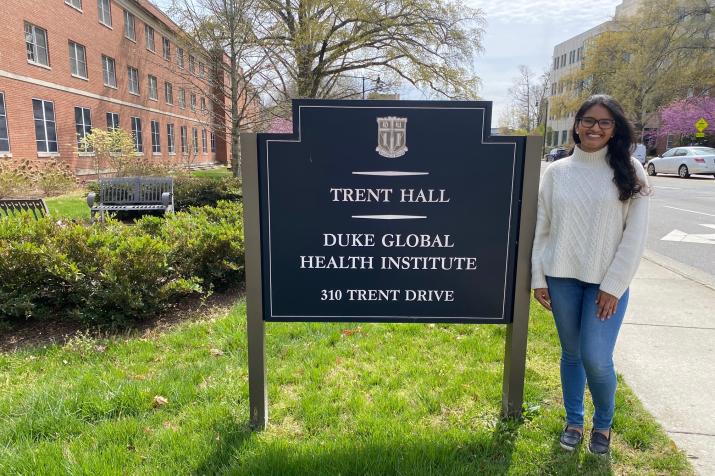 Arushi Biswas will graduate this May with a double major in biomedical engineering and global health. She aspires to work in pediatrics and teach medical students.

Arushi Biswas knew what her future profession would be in third grade: a physician. Experiences she had in the coming years only solidified her career choice.

Born in West Bengal, India, Biswas moved to the United States early in life. She had a formative global health experience while attending the North Carolina School of Science and Mathematics, she went on a medical service trip with Global Public Service Academy, founded by DGHI emeritus professor Robert Malkin, Ph.D. As part of the program, she joined a trip to Belize to learn about the high prevelance of diabetes in a remote village.

“That trip cemented my interests in global health,” says Biswas. “Something in me said, I would like to address those disparities in my career and make a lasting and meaningful change.”

And that brought Biswas to Duke. She’ll graduate in May with a double major in biomedical engineering and global health and a certificate in Innovation & Entrepreneurship. As a student, she's been working alongside DGHI’s Tamara Fitzgerald, M.D., Ph.D., associate professor of surgery and global health, on a Bass Connections project since to create a less-expensive laparoscope for developing countries; Biswas has helped with this project since sophomore year and will continue to through the first part of summer this year. Also, she’s worked in the Pratt School of Engineering’s Chilkoti Lab on point-of-care diagnostics.

Biswas met Fitzgerald during her freshman year while taking an introductory engineering design course. Her team was tasked with developing a low-cost silo Fitzgerald and her global partners could use to enable surgery for gastroschisis in sub-Saharan Africa. The project earned top prize at the 2021 Bay Area Global Health Innovation Challenge.

Image
Arushi Biswas at the 2019 American College of Surgeons Clinical Congress in San Francisco where she teammateCaroline Salzman presented the results of bench testing for our low-cost silo.

“Going into college, I didn’t know how I would combine my interests in global health, surgery and biomedical engineering,” Biswas says. In Fitzgerald, she saw someone doing exactly what interested her. “Dr. Fitzgerald has been a major source for inspiration for me. She’s doing exactly what I’m interested in, and she’s been one of my biggest supporters and mentors at Duke.”

In March, the Duke Innovation and Entrepreneurship initiative spotlighted Biswas in its “Celebrating Women in Innovation” social media campaign for International Women’s Day, describing her as one “of Duke’s many women scholars who are changing the world with their innovations.”

“I didn’t know they were spotlighting me until I received an email and found out,” she says, calling the recognition a surprise. “I was honored to be recognized alongside these women and see the work they’re doing.”

Biswas credits her time learning at DGHI for helping her better understand how global health is an interdisciplinary effort between researchers, engineers, policymakers and more. That level of exposure was something Biswas was missing until she came to Duke.

“The faculty here will help you find projects that align with your interests and so many of my classmates are passionate and involved that it helps expand your knowledge,” she says. “That’s been a very crucial part of my experience. Absorbing as much as I can from my peers.”

“Now it’s confirmed I’m going to be a doctor,” she says. “I’m going to be what I’ve always wanted since third grade. I’ve been lucky to have such great mentors along the way, and I’m grateful to Duke.”